We investigated the change in the characteristics of contact lenses according to the interpenetrating polymer network (IPN) time and method when a contact lens was dual-networked with alginate and carrageenan. The IPN was formed for four weeks using semi-IPN and full-IPN. The functions of contact lenses were assessed based on the measurement of water content, oxygen permeability, contact angle, protein adsorption, and antimicrobial. With the increase in IPN time, all physical and chemical properties of contact lenses were improved. The oxygen permeability and wettability were better when using alginate than using carrageenan. The water content and oxygen permeability were better when using the semi-IPN method than using the full-IPN method, whereas wettability was further improved when using the full-IPN method. The result of this study verified that seaweed polysaccharides were helpful in the functional improvement of hydrogel contact lenses, and performance was better in a longer IPN time. 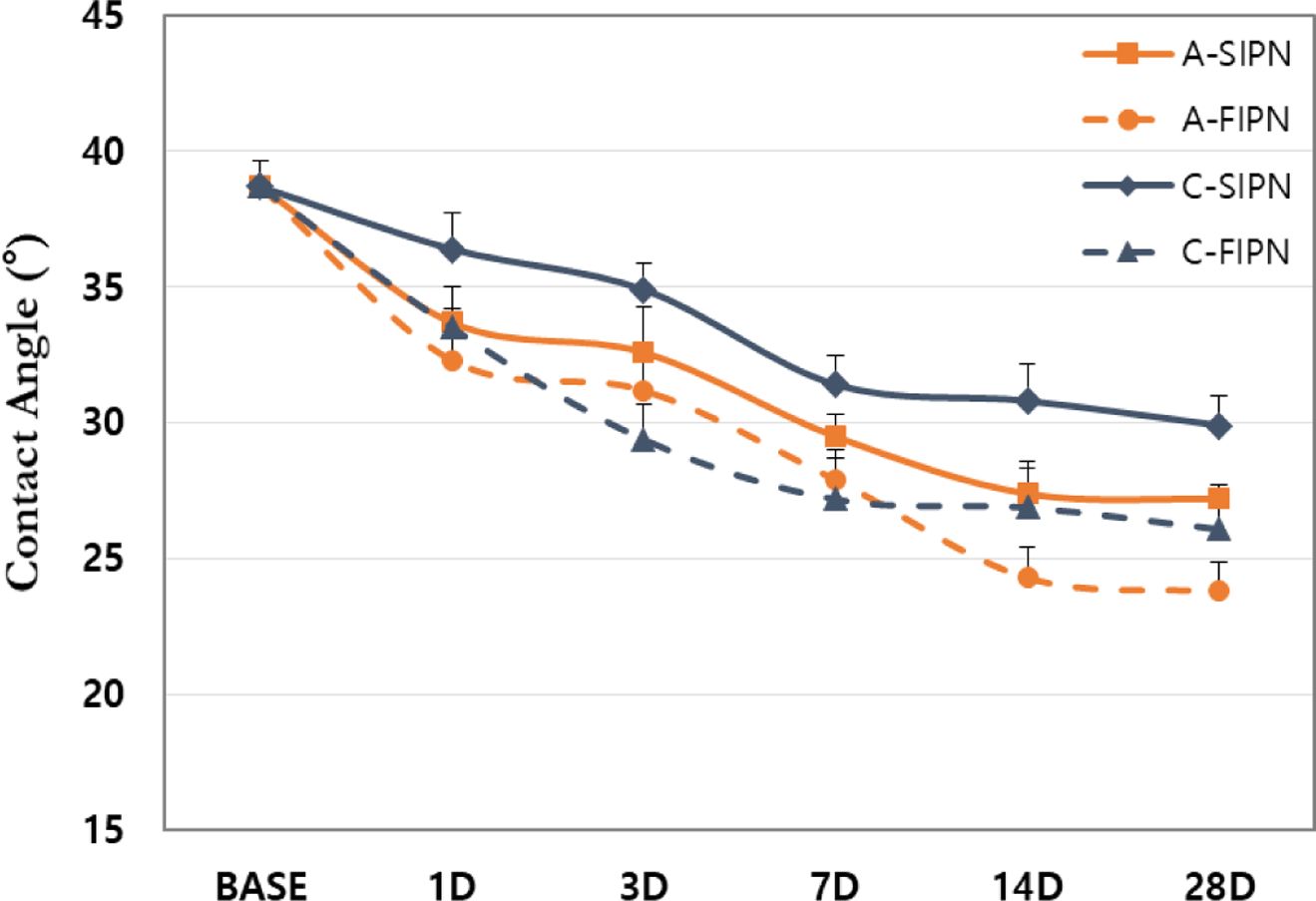 This research was supported by the National Research Foundation of Korea (NRF) grant funded by the Korea government (No. 2018R1A2B6008622)

A hydrogel is a network of cross-linked polymer chains that has the ability to absorb a large quantity of water without being dissolved in the water. Hydrogel has been widely applied in bio-medicine fields such as soft contact lenses, wound dressing, and drug delivery since it has a high water content and biocompatibility.1,2 A hydrogel contact lens affects a cornea significantly as it is placed inside the eye and plays an important role in eye health. Methacrylic acid, which is the main ingredient of hydrogel contact lenses, plays a role in maintaining moisture in the lens and delivering oxygen to the cornea.3,4 However, the amount of oxygen that is delivered to the cornea that passes through the lens is small because oxygen is dissolved by tears in the contact lens. Hypoxia induces hypercapnia and may reduce the corneal function as it causes a change in the physiological process of the corneal tissue.5 To overcome the limitation of hydrogel, hydrophobic silicone polymer has been used to dramatically improve oxygen permeability. However, studies have reported that the wearing comfort has been degraded due to the reduction in wettability and increased fat deposition as a result of the hydrophobic surface and high modulus value compared to those of hydrogel contact lenses.6,7 Although silicone hydrogel lenses have been treated with plasma or hydrophilic materials have been added to the inside of the lens to overcome the limitations of hydrogel and silicone hydrogel, the issues of wettability and wearing comfort remain unresolved.6
In addition, various methods such as the modification of the hydrogel surface or the whole microstructure have been studied to improve the functionality of contact lenses. An interpenetrating polymer network (IPN) is a cross-linked polymer blend, in which other polymers are additionally networked to the original polymer hydrogel. IPN has the advantages of a synergy effect of the ingredients, improvements in mechanical property, and an increase in biostability.8,9 IPN methods are classified as semi-IPN and full-IPN according to whether or not cross-linking agents are added in the IPN process.10,11
Natural polysaccharides are convenient in hydrogel production, have relatively little toxicity, and show biocompatibility compared to synthetic polymers.12 Some of the typical polysaccharides as functional materials that are induced from seaweeds are alginate, carrageenan, fucoidan, and agar. Seaweed polysaccharides have been known to have various bioactive functions such as antioxidant, antitumor, antiviral, and antibacterial effects and for strengthening immunity. They are also used as various raw materials in food, cosmetics, medicine, and seaweed industries.13,14 Among seaweed polysaccharides, alginate is a natural polysaccharide obtained from sargassum fluitans such as seaweed and kelp, which consist of the combination of (1-4)-linked β-D-mannuronate (M) and C-5 epimer α-L-guluronate (G) (Figure 1). Alginate has high wettability that is capable of absorbing moisture of more than 200 to 300 times its own weight, and has been used in a wide range of medical application fields including drug delivery and tissue engineering due to its biocompatibility.15 It is also characterized by a significant increase in elasticity if alginate is cross-linked with calcium ion, which is a divalent metal cation, resulting in an egg-box structure. Alginate has high biocompatibility with high wettability, and is sufficient to be used as a wound dressing to prevent damage to epithelial cells and granulation tissues.16
Carrageenan is a polysaccharide that is extracted from red edible seaweeds (Figure 1). It is one of the prominent biopolymers because it forms a water-soluble gel, is biocompatible, and has potential pharmaceutical properties including anticoagulant, anticancer, and immunoregulatory properties.17 Carrageenan has various molecular structures including kappa(κ)-carrageenan, iota(ι)-carrageenan, and lambda(λ)-carrageenan. Their primary differences depend on the number and position of the ester sulfate groups on the repeating galactose units. Among them, κ-Carrageenan has the most excellent gel formation ability and hysteresis effects as it is a polyelectrolyte with a whole negative charge.18
Such natural polymers are not well mixed with other monomers and cause phase separation, which displays limitations in their reactivity and processability.19 IPN has been used as one of the methods to solve the problem.
A number of studies on hydrogel using seaweed polysaccharides have been conducted and a few have been performed on contact lenses using alginate. However, no studies have been conducted on contact lenses using carrageenan. Thus, the objective of this study was to improve the contact lens functionality with IPN using alginate and carrageenan, which are seaweed polysaccharides among natural polysaccharides. This study also aimed to determine the changes in the physical characteristics of contact lenses according to the types of seaweed polysaccharides, IPN time, and IPN type.

Reagent and Specimen Fabrication. Products procured from Sigma-Aldrich were used as the main ingredients of hydrogel contact lenses. The main ingredients comprised 2-hydroxyethylmethacrylate (HEMA), 2-methacryloyloxyethyl phosphorylcholine (MPC), and N-vinyl-2-pyrrolidone (NVP). In addition, ethylenglycoldimethacrylate (EGDMA) was used as the cross-linking agent and a product from Junsei Chemical Co., Ltd. was used as the initiator 2,2-azobis(isobutyronitrile) (AIBN). Alginate and κ-carrageenan, which are seaweed polysaccharides, N,N’-methylenebisacrylamide (MBAA), which is a cross-linking agent used in the IPN, and ammonium persulfate (APS), which is an initiator, were additional products that were procured from Sigma-Aldrich.
Contact lenses were manufactured in two steps. In the first step, hydrophilic monomers HEMA, MPC, and NVP were mixed with AIBN as an initiator, and EGDMA as a crosslinking agent, followed by thermal polymerization at 100 °C for 1 h using a casting mold method. The second step is IPN inside the contact lens using polysaccharides. For semi-IPN, the lenses manufactured in the first step were immersed by mixing APS in 1% alginate or 1% κ-carrageenan solution, respectively. Full-IPN manufactured contact lenses using a solution of APS/MBAA instead of APS in the semi-IPN process. The IPN process was carried out for 1, 3, 7, 14, and 28 days, and after the reaction was completed, the unreacted material was removed and the physical properties were evaluated. Schematic diagrams of semi-IPN and full-IPN methods (Figure 2).
The naming of the specimens was as follows. The basic specimen was named “BASE.” A specimen was named “A” when alginate was the IPN material, “C” when the IPN material was carrageenan. Semi-IPN was named SIPN, and full-IPN was named FIPN according to the IPN method used (Table 1).
Measurement of Physical Characteristics. The light transmittance was measured using the cary 60 UV spectrophotometer by performing semi-IPN and full-IPN with alginate and carrageenan on a contact lens for 28 days.
The water content, contact angle, and oxygen permeability for each of the fabricated specimens were measured, and a mean value of five measurements per specimen for each measurement item was used.
For the water content, a weight measurement method specified in ISO 18369-4:2006 was used, and the following eq. was used to calculate the water content.

EWC refers to a water content at the equilibrium state, Wswell refers to a specimen weight immersed in a phosphate buffered saline (PBS) solution for 24 h, and Wdry refers to a specimen weight dried in an oven for 16 h. For contact angle measurements, specimens hydrated for 24 h using DSA30 of GMBH were measured via the sessile drop method. The oxygen permeability (Dk/t) was measured based on the ISO 18369-4:2006 standard, and the 201T Permeometer of the Rehder Development Company was used via the polarographic method. The radius of curvature of the used polarographic cell was 8.7 mm, and a temperature was maintained at 35±0.5 ℃.
Protein Quantification. For proteins, bovine serum albumin (BSA), which is similar to the form and chemical properties of human albumin, was used in the experiment, and the product of Sigma-Aldrich was employed. The PBS solution containing 5 mg/mL BSA was fabricated and 2 mL of the solution was put into a vial. Then, each of the specimens was put into the BSA solution and incubated for 24 h at 37 oC to adsorb the protein. Each of the specimens adsorbed with protein was cleansed twice with PBS and then put into a sodium dodecyl sulfate (SDS) solution (3%) dissolved in dd-H2O. Then, each specimen was heated in an oven at 95 oC for 15 min and the protein attached to the specimen was desorbed by shaking the specimen slowly for three min in a vortex. The Agilent Cary 60 UV-Vis Spectrophotometer was used to measure the absorbance, and the absorbance value was checked at 280 nm, which was the maximum absorption wavelength of proteins. The molar absorptivity (ε) was 3.35 mg·cm/g, and the protein concentration was calculated using the eq. A=εbC. The protein adsorption was calculated using the following eq.20

Q refers to the protein adsorption, V refers to the solution amount, C refers to the protein concentration, and m refers to the hydrated specimen weight.
Antimicrobial. The antimicrobial evaluation was conducted using the basic specimen BASE and 28 day IPN specimens using seaweed polysaccharide. The bacteria used to determine the antimicrobial was Escherichia coli (E. coli, ATCC 10536), and the bacterial strain was distributed from the Korea Culture Center of Microorganisms. The broth used in the antimicrobial experiment was mixed with 2 g peptone and 1.2 g beef in 40 mL distilled water and set to pH 7.0, and then sterilized in an autoclave. The E. coli was free-cultured in the broth before it was used in the experiment. Each specimen was put into a vial containing the broth, which was then cultured at 35 oC for 12 h after inserting 1 mL of the E. coli followed by diluting the broth 1,000 times. 1 mL of the diluted solution was smeared on a Petrifilm plate and incubated at 35 oC for 24 h. For the dehydrated medium, the E. coli 3 M PetrifilmTM Count Plate was used.