Using photochromism of a diarylethene, we demontrate an easy but highly effective coating method for a camouflage application. The photochromic ink is consisting of capsule type of photochromic pigments and UV curable epoxy resin, reversibly presenting colored pattern in response to ultraviolet (UV) light. The transmittance of the coatings was investigated based on concentrations of the photochromic microcapsules, we have found that 5 wt% of the microcapsules in epoxy resin is most appropriate for camouflage with background. Besides, in order to increase mechanical stability of the coating, thin protective layer including acrylate chemicals is further coated on the patterns. By taking advantage of bar-coating with various mask pattern, different patterns were successfully coated on various types of surfaces such as wood, glass, general concrete wall and even curved surfaces. Based on the coating method, camouflage application for an encryption quick response (QR) pattern was successfully demonstrated. 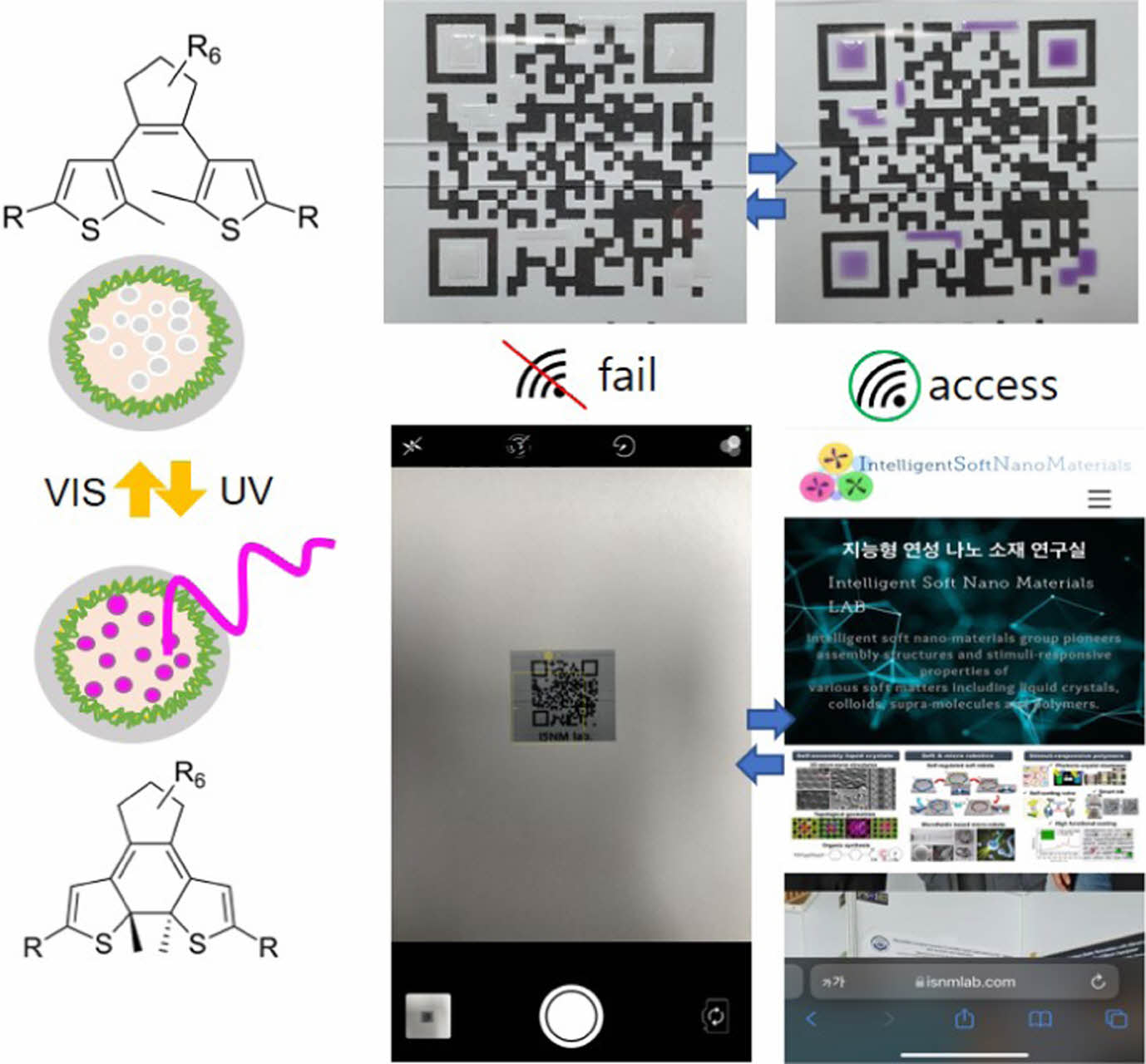 Information is available regarding the Intensity profiles of PL spectra at 583 nm with different area over the coatings. The materials are available via the Internet at http://journal.polymer-korea.or.kr.)
PK_2022_046_02_288_Supporting_Information_template.pdf (246 kb)
Supplementary Information

Living organisms such as cephalopods, chameleons, and satanic leaf-tailed geckos are cryptically colored with a wide range of hues and patterns, closely matching their respective environments for camouflage, signaling, or energy regulation.1,2 Notably, these organisms can often dramatically change the intensity or color of these patterns. Furthermore, their capability of camouflage has received considerable attention in various research fields, industries, and special institutes such as the military.3 One of the most promising materials for camouflage is chromic dye, whose molecular structure changes under external stimuli such as light,4 heat,5 chemicals,6 mechanical force,7 or their combination.8 The combination of these stimuli can reversibly produce two isomers with different colors.
Camouflage requires that the color or pattern should change according to the background color or geometries,9 while the camouflage objects should also be able to reveal themselves depending on the specific condition. Besides, the alternation between camouflaged and un-camouflaged states should be fast in response with the condition. Thus, a transformation of information can be selectively and actively controlled by the camouflage technique for various applications such as in encryption displays, anti-counterfeiting, responsive photonic devices.10 Hence, among the chromic materials, using photochromic materials are one of mostly preferred strategy for the camouflage applications owing to the remote and fast variations in color and pattern with external stimuli.11 Several scientific and technological advances have been made in the processing and usage of photochromic dyes for final applications which have significant commercial value.12,13 However, camouflage coating applications face certain challenges at the practical level. One of them is the transparency of the coating, which is a critical factor in order to effectively disguise with the background. Another important issue is the development of proper coating supporters for chromic dyes, because organic chromic dyes alone are difficult to utilize in coating applications.14 Furthermore, other issues associated with camouflage coating applications are cost, stability, reliability, and easy accessibility. To address these issues, various methods to incorporate chromic dyes have been suggested; however, each method requires an optimization process for final applications depending on the type of dye or carrier and application field, which will be a significant hurdle for practical applications.15
The micro-capsulation of photochromic dyes is a promising approach to attain supporters that are capable of stably containing chromic molecules. Owing to their easy processability, accessibility, and abundant functionality,16-18 photochromic microcapsules have been widely used in silk printing,19 wood,20 textiles,21,22 and sensory coatings.23,24 In this study, we demonstrate an easy and effective camouflage coating method using a photochromic ink. This ink consisted of micro-capsulated photochromic pigments (MCPPs) and ultraviolet (UV)-curable epoxy resin, which can reversibly change color in response to UV light. For the camouflage, the transmittance of the coatings is investigated based on concentrations of the photochromic microcapsules, it is found that 5 wt% of the microcapsules in epoxy resin is most appropriate for camouflage with background. In addition, to increase the mechanical stability of the coating, a thin layer of acrylate chemicals is further coated on the patterns. By taking advantage of bar-coating with various mask pattern, different patterns are successfully coated on various types of surfaces such as wood, glass, general concrete wall and even curved surfaces. Based on the coating method, camouflage applications for an encryption quick response (QR) pattern is successfully shown.

Materials. The photochromic pigment, i.e. MCPP, and UV curable epoxy resin were purchased from Ons, Inc. and Baekyong P&C, S. Korea, respectively. 50 μm thick-PET film (Formtec, Inc., S. Korea) was used for the coating mask patterns. For the protective coating, trimethylolpropane triacrylate (Surkorea, S. Korea) was purchased. Since the MCPPs include a solvent, 1,2-dimethyl-4-(1-phenylethyl)benzene, in order to confirm a possible degradation of photochromic property by the solvent-evaporation, we have checked the color change of the MCPPs over last 6 months, there was no significant changes in photochromic responsibility. This is possibly due to relatively high boiling point of the solvent, which is ~148 ℃, therefore it seems to be stable in ambient condition at room temperature. Furthermore, because ~20 wt% of the photochromic dyes is dissolved in the solvent in the capsules, thermodynamically the boiling point elevation of the solvent may occur by the solute, photochromic dyes.
Preparation of Coating Solution. The MCPPs and epoxy resin were mechanically blended in beaker by using vortex mixer (VM-10, Witeg, S. Korea) for 3 minutes and sonicated for 10 minutes in order to remove bubbles in the solution. in the bar-coating process, first the mask-pattern film of PET is printed and cut as required in the camouflage patterns such as text or graphics. And then the mask pattern film is placed onto a substrate and coated by the bar coater (TMAX-VFC-150C, TMAX Battery equipment, China). Then, removing the PET film from the substrate and curing the coating using UV light of 354 nm, 10 mW/cm2 (Ushio Shenzhen, Inc., Japan). To improve chemical and mechanical stability, trimethylolpropane tri-acrylate were further coated on the patterns and cured with UV light for 10 minutes.
For the control molecules of diarylethene, MCPPs were dissolved in chloroform with vigorously stirring for 1 hour. Then, the solution was filtered using suction flask with vacuum pump and the extruded solution was evaporated using rotary vacuum evaporator. The extruded molecules were dispersed in epoxy resin.
Materials Material Characterization. Optical texture of the UV-curable photochromic ink was observed using optical microscope (LV100POL, Nikon, Japan). The transmittance and the photoluminescent (PL) spectra of the photochromic camouflage coating on glass were collected using a spectrometer (USB-2000+, Ocean Optics, USA) with a halogen lamp. A sand abrasion test was carried out following a method reported in the literature.25,26 Typically, 20-80 g of commercial sand (Sigma-Aldrich, USA) was dropped onto the coated surface from a height of 40 cm while the substrate was inclined at 45o. All photographs were taken using iPhone 13 (Apple. Inc., U.S.A.)

We demonstrated an easy and highly effective camouflage coating method for a photochromic ink consisting of MCPPs and UV-curable epoxy resin. The coating reversibly changed color based on UV light. Using mask patterns, different patterns were successfully coated on different surfaces such as wood, glass, general concrete walls, and even curved surfaces. Based on the camouflage coating, encryption display films for QR codes were successfully demonstrated. The result implies that the stimuli-responsive QR code can be used as a base technique that is able to spatially control and limit the information access as the QR code is only activated under UV-irradiation. Thus, we believe that the camouflage coating approach can be used in security-based coating applications such as in encryption displays, anti-counterfeiting, responsive photonic devices, and smart design of various products.