Viscosity effect of carboxymethyl cellulose (CMC), an aqueous binder for lithium secondary batteries, on the electrochemical performance of graphite anode materials is investigated by changing the adhesion to graphite, binder, and current collector. Using three CMC binders with different molecular weight, viscosity of pure aqueous solutions and anode slurry solutions with graphite materials are compared using rheometer. The rheological trend is dependent on the interaction between CMC binder and graphite material. After fabrication of the anodes in lithium ion batteries , the binder with highest viscosity showed the best cycle and rate performances; 88.0% @ 140 cycles and 220.6 mA h g−1 @ 2C rate, which is attributed to high adhesion strength with current collector. Furthermore, formation of different microstructures results in advanced cycle performance and low rate capability (86.3% after 140 cycles) from the enhanced viscosity slurry solution in spite of weak adhesion property with current collector. Hence, the rheology of the slurry solution can critically influence on the electrochemical performance of the graphite anode in LIBs.

Using three carboxymethyl cellulose (CMC) binders with different molecular weight, viscosity of anode slurry solutions with graphite are compared with rheometer. The rheometer is dependent on the interaction between CMC binder and graphite material. the rheology of the anode slurry solution can affect the electrochemical performance in LIBs. 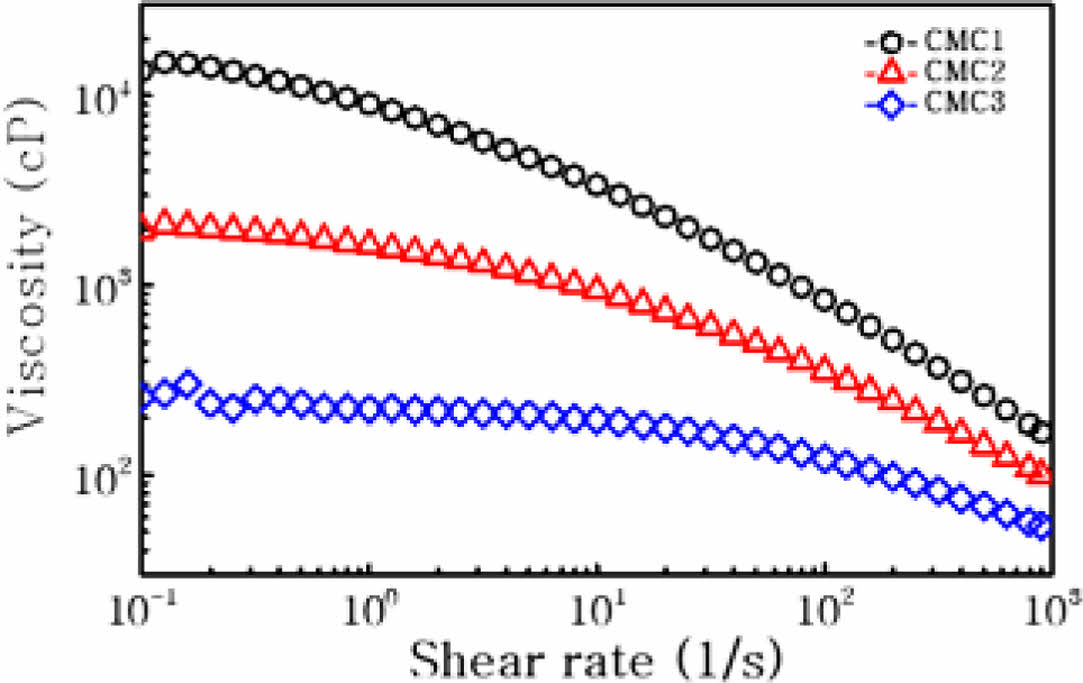 This research was supported by the Chung-Ang University Research Scholarship Grants in 2021 (assistant researcher A). Also, this work is supported by the National Research Foundation of Korea (NRF), funded by the Korea government (MSIT) (No.2021-0-01777).

Since the first production of the commercial lithium-ion battery (LIB) in the 1990s, extensive research efforts have been tried for the improvement of LIB performance. Research into LIBs has focused on two areas: electrode material synthesis and electrochemistry. Typical negative electrodes are composed of a carbonaceous active material, a conductive additive, and a binder. During the electrode fabrication process, three materials are typically blended with a solvent, followed by coating onto the current collector and drying.1-4 Carbonaceous materials such as soft carbon, hard carbon, and graphite have been utilized as the main active material in anodes because of their high capacity, performance, and stability and wide-scale availability. To improve the performance of carbon-based anodes, electrode fabrication and the selection of components such as a conducting agent and binder must be optimized. The binders play particularly important roles for establishing strong adhesion of electrode active materials and for maintaining the mechanical stability of active anode layers on the current collector. Previously, the N-methyl-2-pyrrolidone (NMP)-soluble binder was based on a fluoride polymer. More recently, however, cellulose-based binders, such as carboxymethyl cellulose (CMC), which are dispersed in an aqueous solvent, have been employed due to their high environmental safety, wide availability, and inexpensiveness.5-7 The anode slurry is typically an inhomo- geneous mixed phase that comprises graphite or carbon black as a particle, CMC as a binder, and an aqueous medium as a solvent. Multiple microstructures can be organized because of the interaction between the particle and the polymer such as through bridging, depletion attraction, or electrostatic repulsion.8 It has been noted that the microstructure in the slurry is dependent on the ratio of between CMC binder and graphite. If the ratio of CMC to graphite is low, graphite particles are dispersed in the slurry because of steric repulsion by adsorbed CMC on graphite. When the ratio of CMC to graphite is high, however, the aggregation of graphite particles occurs because of depleted attraction by non-adsorbed CMC. In this way, films having different microstructures can be prepared according to the change in the microstructure of the slurry, which has a strong influence on anode performance. It has been reported that the polymeric binder affects particle dispersi on in the anode slurry, dried film characteristics, and battery performance.9-12 Lee et al. investigated the microstructures of the slurry and the electrode as a result of the mixing protocol, and determined that high dispersion of the slurry results in LIB performance improvement. This reflects that determination of the main factors is important in affecting microstructure formation of the slurry to enhance battery performance; these factors are significant because graphite particles tend to become aggregated in an aqueous solvent because of the presence of non-polar surfaces and hydrophobicity, indicating the significance of their dispersion in an aqueous solution. In addition, the effect of CMC on the dispersion of graphite particles and on the viscosity of the slurry in the aqueous solution, should be investigated.13-18 However, there is a shortage of research into the origin of viscosity induced by the binders in the aqueous anode slurry.
Herein, the effect of CMC on viscosity can be investigated by employing three types of CMC binders. Using rheological measurements, the viscosity of an aqueous solution containing only three CMC binders and that of the mixed slurry with graphite active materials were analyzed. In addition, slurry conditions such as stirring time and speed were varied to allow for direct comparison of the graphite morphology and electrical and mechanical properties. After fabrication of the anodes, the electrochemical behavior of half cells using three binders was studied.

Electrode Preparation. The CMC binder was obtained by GLCHEM. Natural graphite from POSCO CHEMICAL was used as an active material and carbon black (CB) (Super P) (KETI, Korea
) as a conductive additive. The electrode composition was determined at 90/5/5 wt% (graphite/CB/binder). A copper foil (20 μm thick, KETI, Korea) as the current collector was utilized. Three types of CMC binders (DS=0.8-1.2, CMC1 Mw=978172, CMC2 Mw=748148, CMC3 Mw=612426, GLCHEM) were employed as a binder for comparison. Graphite (KETI, Korea), CB and CMC binder were mixed in an agate mortar for 1 hour after dropwise addition of D.I water into the slurry mixture for 5 min. After mixing, styrene-butadiene-rubber (SBR) (KETI, Korea) was added for 5 min, which formed a homogenized ink. This ink was coated onto the Cu current collector using a doctor-blade technique. Here, battery grade SBR from MTI corporation (butadiene 70-72%, styrene 23-25%) was utilized as co-additive binder. After drying electrodes at 80 °C for 12 h in a vacuum oven, thery were stored in an argon-filled glove box and used as anodes in lithium ion batteries.
Electrochemical Performance. Conventional CR2032 two-electrode coin cells were fabricated for anode performance test. They were assembled in a glove box using coin-cell components (1.2 cm diameter from Welcos, Japan), electrolyte reservoir, separator, and a lithium metal disk (MTI, 1.8 cm diam.), which used as a counter electrode. A 1 M LiPF6 in a 3/7 volume ratio mixture of Brookfield, ethylene carbonate/ethyl methyl carbonate (EC/EMC) (KETI, Korea
) was utilized as electrolyte. Using a WonaTECH cycler, galvano- static charge-discharge experiments were conducted. Cycling condition was voltage cut-off between 3.0 and 4.3 V vs. Li/Li+ and C-rates ranging from C/10 to 20 C. 1 C-rate current condition was calculated using the theoretical capacity of graphite (372 mA h g-1).
Rheological Measurements. The rheology of different aqueous solutions containing only CMC binders were evaluated at 25 °C on a controlled-stress rotating rheometer (DV-II+Pro, Brookfield, Canada) with a 3 cm diameter plane-plane geometry under several speeds. Also, other measurement were obtained with continuous shear. Sweep rate was ranged from 0.1 to 1000 s-1, which was conducted both with and without graphite/CB. In order to investigate the rheology of the electrode slurry, the DV-II+Pro apparatus was utilized.
Peeling Strength Test. The peeling strength between the copper foil and the electrode was measured using tensile test machine (JSV-H1000, JISC, Korea). An adhesive tape (3 M, 10 cm width) was bonded by pressing it onto the electrode strip, which was fixed on a glass plate by using a double-faced adhesive tape. After a period of relaxation time, peeling test at an angle of 180° was conducted under a speed of 10 mm min-1. The relationship between tensile force and the peeling displacement were measured.

In this study, CMC with various initial viscosities was used as a binder for the fabrication of LIB anodes. The binder with the highest viscosity exhibited the optimal cycle and rate performances after when used for anode fabrication because of high adhesion strength with the current collector. In spite of low viscosity in the pure aqueous CMC solution, however, increased viscosity in the slurry solution was observed, which was attributed to the formation of different microstructures as a result of the change of the interaction with SBR. This anode also exhibited acceptable anode performance despite of its weak adhesion properties. Hence, it was concluded that the rheological phenomena of the slurry solution were the most crucial factor for the electro- chemical performance of the graphite in LIBs.