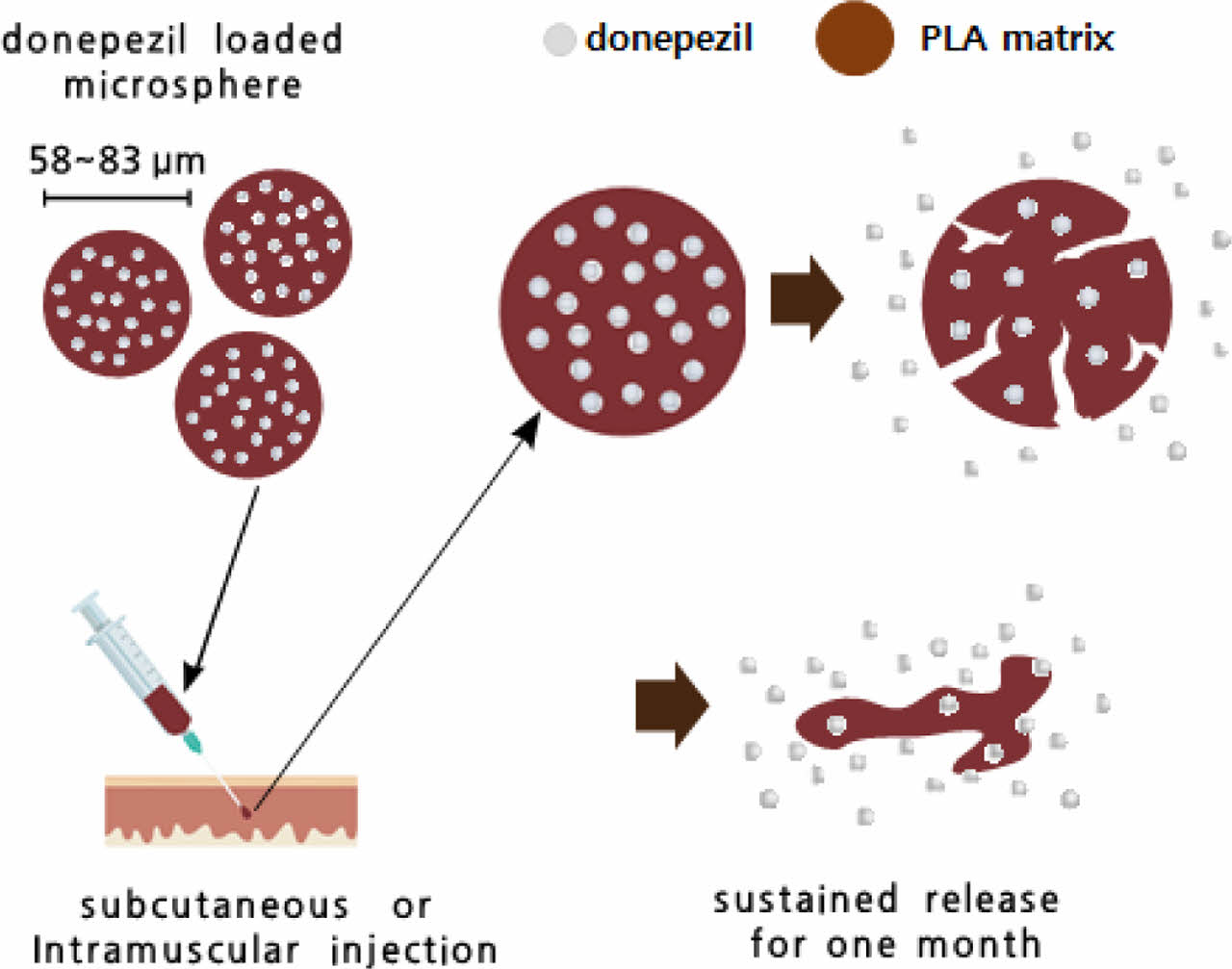 Alzheimer's disease (AD) is a neurodegenerative disorder characterized by progressive cognitive deterioration, a decline in the ability to perform daily activities, and behavioral changes. The disease initially damages the brain, thereby affecting learning, memorizing, thinking, and planning. This mental decline negatively affects the quality of life of patients because they have difficulties expressing themselves and organizing their thoughts.1 As the disease progresses, more changes occur in the patients’ personalities and behaviors, with patients requiring extensive help with daily activities. Over time, shrinkage of the brain results in more severe signs of AD, such as a decline in thinking and reasoning and an inability to respond to the environment or control movement.2
AD is the most common cause of dementia in individuals aged 65 years and older. Recently, the number of patients with dementia has rapidly increased, and the management of patients with dementia has become a serious social problem.3,4 Dementia is a central nervous system-related degenerative disease characterized by a loss or decline in memory and other cognitive abilities, resulting in irreversible dysfunction of the neural network due to the slow death of nerve cells, leading to a permanent loss of function.5 The cause of dementia has not yet been clarified, but includes various pathological and pathophysiological factors. Currently, there is no cure for dementia, and the treatments for AD are indirect methods, including the administration of acetylcholinesterase inhibitors, such as donepezil (trade name: Aricept), tacrine (trade name: Cognex), rivastigmine (trade name: Exelon), and galantamine (trade name: Reminyl). Donepezil is an acetylcholinesterase (AChE) inhibitor widely used to treat mild to severe AD.6,7
The available donepezil formulation is in the form of tablets, which are administered orally to patients. However, orally administered acetylcholinesterase inhibitors are generally associated with poor compliance; moreover, they can exert adverse effects, such as anxiety; nightmares; insomnia; and gastrointestinal adverse effects, including nausea, vomiting, and diarrhea. It is also difficult to administer these drugs orally to patients with advanced dementia. Therefore, studies have been actively conducted to develop new formulations for the long-term release of dementia drugs through injections and rectal or transdermal administration.8-10
Poly(lactic-co-glycolic acid) (PLGA) is a copolymer of poly lactic acid (PLA) and poly glycolic acid (PGA). The biodegradation rate of PLGA copolymers is dependent on the molar ratio of the lactic and glycolic acids in the polymer chain and the molecular weight of the polymer.11-14
In this study, we aimed to develop a method for AD treatment that maintains the efficacy of single administration of donepezil for a month compared to the once daily oral administration. To this end, PLGA was used to develop a one-month long-acting formulation of donepezil-loaded monodisperse microspheres using the membrane emulsification method.15 We then analyzed the potential of the donepezil-loaded microspheres, which had a uniform particle size, for the sustained and stable release of donepezil.

Materials. Dichloromethane and acetonitrile were purchased from Avantor (Phillipsburg, NJ, USA). Poly(vinyl alcohol) (PVA) was obtained from the Mitsubishi Chemical Corporation (Tokyo, Japan). Poly(lactide-co-glycolic acid) (lactide:glycolide=85:15) (MW=215000 g/mol) and Poly(D,L-lactic acid) (MW=25000 and 15000 g/mol) were purchased from Evonik Operations GmbH (Essen, Germany). The donepezil base was obtained from Neuland Laboratories Limited (Hyderabad, India). Dimethyl sulfoxide, monobasic potassium phosphate, triethylamine, and polysorbate 20 were purchased from Sigma-Aldrich (St. Louis, MO, USA). Sodium carboxymethylcellulose (AqualonTM 7LF PH BET) was obtained from Ashland (DE, USA). D-Mannitol (Pearlitol PF) was purchased from Roquette Freres (Lestrem, France). Sodium hydroxide and citric acid were obtained from Samchun Chemicals Corporation (Seoul, South Korea), and deionized (DI) water was prepared using an Arium® Advance Pure Water System (Sartorius AG, Gottingen, Germany).
Preparation of Donepezil Microspheres. Donepezil-loaded microspheres were prepared using a cross-flow membrane emulsification technique (Figure 1). An emulsification device, a dispersion cell with a flat disc membrane under a paddle blade stirrer, was supplied by Micropore Technologies (Cleveland, UK).16 Pre-determined amounts of the donepezil base and polymers were dissolved in dichloromethane for 2 h to prepare the dispersed phase. The solution was transferred into a polypropylene syringe, and the syringe was placed on a syringe pump. The syringe and dispersed phase inlet of the emulsification device were connected to the PTFE (polytetrafluoroethylene) tubing. PVA solution (0.5% w/w) as the continuous phase was supplied to the reservoir. The reservoir and continuous phase inlet of the emulsification device were connected with platinum-cured silicon tubing fitted to a peristaltic pump. The prepared dispersed phase was supplied into the emulsification device using a syringe pump at a flow rate of 2.5 mL/min for a 30-μm pore membrane or 5.0 mL/min for a 40-μm pore membrane. Simultaneously, the continuous phase was supplied from the continuous phase reservoir into the emulsification device. The droplets produced in the emulsification device were transferred to an evaporation vessel equipped with an overhead stirrer to prevent the precipitation of the droplets. As the first hardening process, the droplets in the vessel were stirred for 30 min. Thereafter, the droplets were separated from the continuous phase by filtration using a sintered stainless-steel filter of pore size 25 μm. The droplets were re-dispersed in 0.5% w/w polyvinyl alcohol solution in the vessel. The solution was heated to 45 °C for 3 h. Subsequently, the temperature was maintained at 25 °C. The hardened microspheres were washed with DI water and collected using a 25-μm pore wire mesh. The microspheres were then freeze-dried.
Characterization of the Donepezil-loaded Microspheres.
Tapped Density: The tapped density was measured as described by Arvind et al.17 A 1.5-mL EP-tube was filled with dried microspheres, and the microspheres were weighed. The tube was tapped on the table 100 times to pack the microspheres. The volume of the packed microspheres was recorded and the tapped density was calculated using the following eq.:

Morphology (Scanning Electron Microscopy [SEM] and Optical Microscopy): The morphologies of the microspheres were observed by SEM (EM-30; COXEM Co., Ltd., Daejeon, South Korea) and optical microscopy (Olympus, BH-2). The microspheres were placed on a sample holder attached to the carbon tape and vacuum sputter-coated with a 0.1-mm-thick Pt layer. The SEM instrument was operated at 15 kV.
In-vitro Accelerated Dissolution Study. The in vitro accelerated dissolution study was performed using USP apparatus 2 (paddle). In brief, 900 mL of 0.05 M acetic acid solution with 0.05 M sodium acetate was added into the vessel of USP apparatus 2 (DS14000; Labindia Analytical Instruments Pvt. Ltd, Maharashtra, India). The temperature of the vessel was maintained at 37 °C under gentle stirring (paddle speed of 150 rpm). The microspheres (200 mg) were placed in the vessel. At pre-determined time intervals, 1 mL of the medium was collected. The amount of dissolved donepezil was determined by HPLC at 271 nm.
In-vivo Pharmacokinetics Study in Rats. Pharmacokinetic (PK) Parameters: The PK analysis in rats was performed by QuBest BIO Co., Ltd. (Yongin, South Korea). Pathogen-free male Sprague-Dawley rats (approximately 8 weeks old) were obtained from Samtako Ltd. (Osan, South Korea). The rats were acclimatized to the laboratory conditions, and the room temperature and humidity controls were set to 22±3 °C and 50±20%, respectively, for 5 days. A certified and irradiated rodent diet (Purina Rodent Chow 38057; Cargill Inc., South Korea) and tap water via polycarbonate bottles were provided to the rats ad libitum. The dose strength of donepezil was 86.8 mg/kg. The formulation was prepared by suspending a pre-determined amount of the microspheres in 0.35 mL of the diluent with 1% carboxymethyl cellulose sodium, 4.5% D-mannitol, and 0.1% Polysorbate20. The individual dose volume was slowly injected using a 1-mL disposable syringe with a 19G needle into the femoral muscles. Blood samples were collected from the jugular vein. The blood samples (0.5 mL) were collected using a heparin-coated disposable syringe at pre-determined time intervals. Plasma samples were analyzed according to the International Scientific Standards (Chuncheon, South Korea). The collected samples were centrifuged at 15000×g for 2 min. The concentration of donepezil in the plasma samples was determined by liquid chromatography–mass spectrometry (LC-MS/MS). The assay range of donepezil in rat plasma was from 0.1 to 100 ng/mL. To calculate the PK parameters, a non-compartmental PK analysis was performed using Phoenix WinNonlin® (8.0 version, Certara, St. Louis, MO, USA).
Non-parametric Superposition Analysis: Steady-state plasma profiles of various donepezil formulations were simulated using the non-parametric superposition module in PheonixTM WinNonlin from the mean plasma concentrations determined after administering each single formulation at 86.8 mg/kg, assuming linear kinetics upon repeated administration. They were simulated by non-parametric superposition for each formulation dose of 86.8 mg/kg administered every 4 weeks over 0-140 days. The lowest post-dose and steady-state plasma concentrations were obtained directly from each simulation.