In this study, we developed sustained release tablets of vitamin C (ascorbic acid, AA) to establish dissolution tolerances and recommend appropriate formulations. We fabricated hydroxypropyl methylcellulose (HPMC) matrix tablets (HTs) and ethylcellulose (EC)-pelletized tablets (ETs) using direct compression and/or fluidized coating. Along with three commercially available products for reference, we acquired the AA dissolution profiles of the prepared samples in 5% metaphosphoric acid aqueous solution to prevent the degradation of AA. We then compared the release patterns using the similarity factor (f2). The selected two formulations (HT7 and ET1) showed drug release within the limit of ±15% of the reference curve, followed by the Korsmeyer-Peppas model. We found that the range of dissolution tolerance for the sustained release formulation was 15-40% (1 h), 25-70% (3 h), 50-90% (5 h), and ≥80% (8 h). 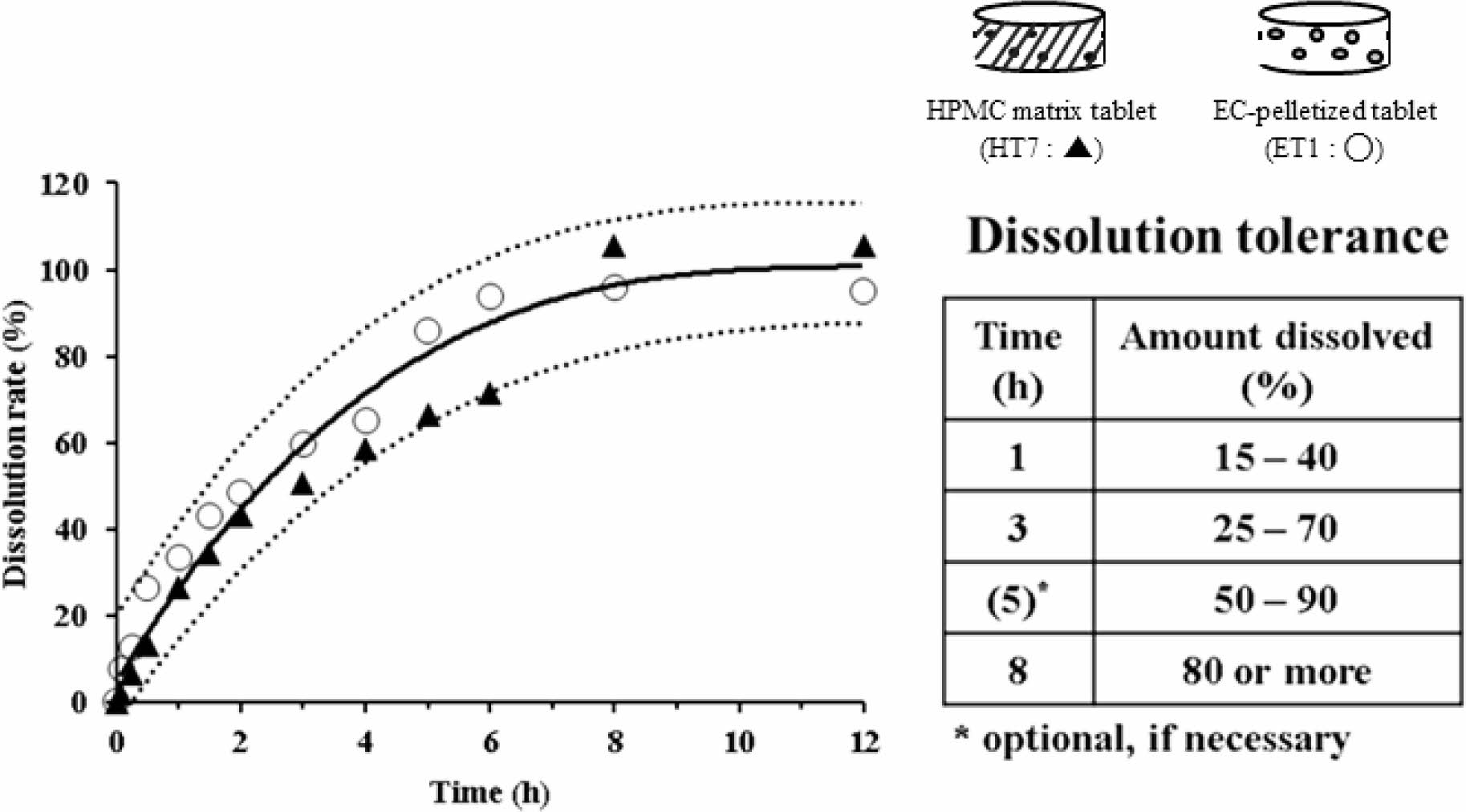 This work was supported by a Chung-Ang University Research Scholarship Grant in 2021. We would also like to thank Novarex Co., Ltd. for the financial support and for supplying the materials.

Vitamin C (ascorbic acid, AA) is an essential nutrient for humans and several other species.1 It helps recovery from fatigue and prevents scurvy by acting as an antioxidant.1,2 The oral daily dose of AA varies, though it is generally recommended as 200-1000 mg per day.3 However, the oral bioavailability of AA depends on its dose because it primarily gets absorbed from the small intestine via sodium-dependent transport.4 Therefore, despite a high dose (~1000 mg) of AA, the oral absorption could be insufficient, and a sustained release formulation needs to be developed.5-7
Oral sustained release formulations have been developed using diverse techniques such as polymer membrane encapsulation, polymer matrix dispersion, osmosis, hydration, and hydrolysis activation.8 Among these methods, dispersing drugs in an inert polymeric matrix is the simplest way to facilitate the controlled release of drugs. In polymeric systems, the active agent is physically blended with the polymer bed and then fused into the tablet dosage form by compression, which is a common process in the pharmaceutical industry. Sustained release formulations are designed to deliver an active agent into the gastrointestinal (GI) tract for absorption, thus maintaining a therapeutic concentration in the systemic circulation for an extended period of time.9
The selection of proper polymers is a key step for developing those sustained formulations.10 Different types of polymers including water-soluble polymers (amylose, amylopectin, and hydroxypropyl methylcellulose [HPMC]) and water-insoluble polymers (ethylcellulose [EC], polymethacrylate, and glyceryl behenate) are available.10,11 Among them, HPMC and EC is the most widely used for preparing matrix-type and/or membrane-type controlled release formulations.11-13 HPMC, a cellulose ether derivative, has a sophisticated drug release mechanism-its micro/macro structure strongly changes with time upon exposure to water. It absorbs the GI fluid, swells, and forms a gel structure.14 The higher the viscosity, the higher is the strength of the gel.15 This property makes it easy to adjust water infiltration into the matrix, thus controlling the dissolution rate of active components.14,15 EC has been widely used as a film coating agent as it is non-toxic, non-irritating, and non-allergenic.16 As EC is insoluble in the GI tract, EC-coated pellets with different coating thicknesses have different drug release behaviors.17
Although numerous AA-containing sustained release tablets have been developed and introduced in the market, standardized protocols for drug release, including dissolution tolerance, are not fully available. Considering the oxidative instability of AA in aqueous solutions, the addition of an oxidizing inhibitor such as metaphosphoric acid in the dissolution medium is required.18 For the determination of AA, either ultraviolet (UV) spectrophotometric assay or high-performance liquid chromatographic assay is recommended.7,19 However, time-course AA release profiles with dissolution tolerance have not yet been suggested. The similarity factor (f2) is typically applied for estimating the similarity between in vitro dissolution profiles according to several FDA and EMEA guidelines.20 Moreover, based on the mathematical model, the estimation of release kinetics provides information on drug release mechanisms, thereby suggesting requirements for proper polymeric systems.21
Therefore, in the present study, to develop an appropriate oral sustained release formulation of AA, we prepared various tablets using different types of HPMC and/or EC, varying their viscosity and amount. Further, to suggest a criterion for dissolution tolerances, we compared their drug release characteristics with those of the reference product. We also applied mathematical approaches for the analysis of similarity factors and release kinetics. 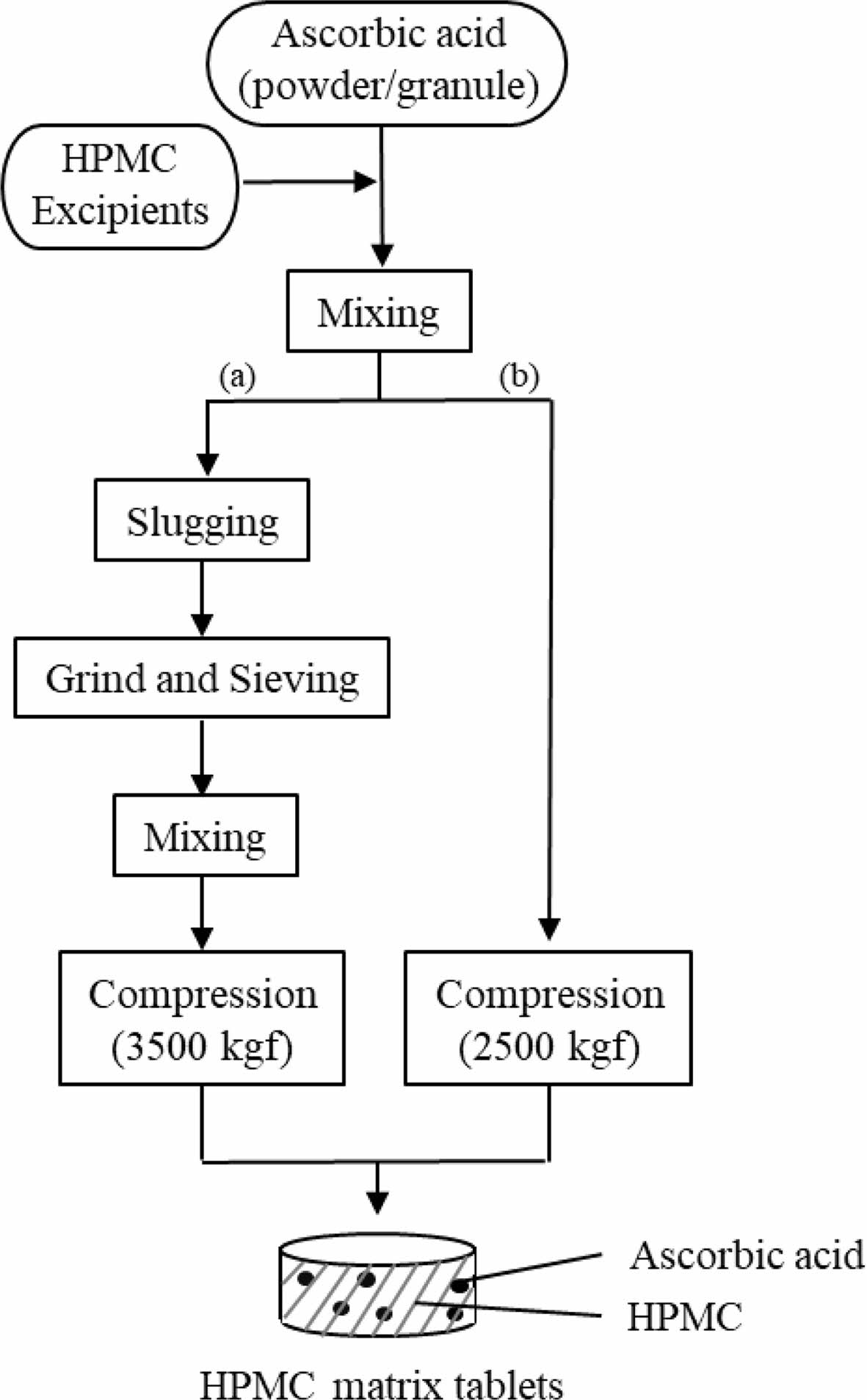 Scheme 1. Flow chart for the manufacture of HPMC matrix tablets. (a) and (b) denote the dry granulation and direct compression methods, respectively 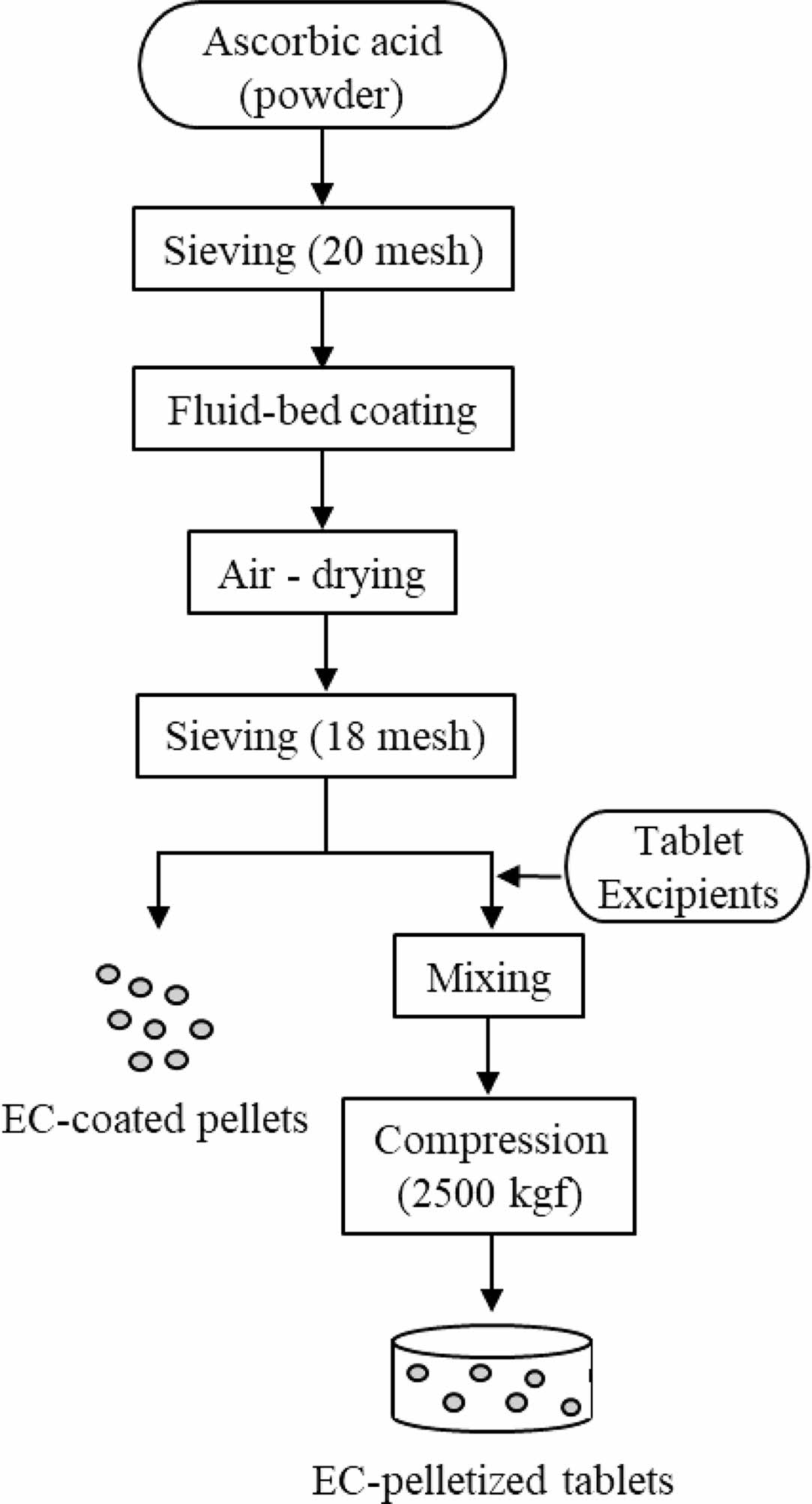 Scheme 2. Flow chart for the manufacture of EC-coated pellets and EC-pelletized tablets.

UV Analysis of AA. We determined the aqueous concentration of AA in the dissolution medium by measuring the absorbance at 245 nm using a UV spectrophotometer (Molecular Devices, Sunnyvale, CA, USA). We dissolved the accurate amount of AA powder in 5% (w/v) metaphosphoric acid aqueous solution and appropriately diluted it to various concentrations (100, 50, 25, 10, 5, 2.5, 1, 0.5, and 0.25 μg/mL). We obtained the calibration curve by least-square linear regression in the range of 0.25-100 μg/mL, with a coefficient of determination (r2) value of >0.99.
In Vitro Dissolution Study. We performed an in vitro dissolution test according to the USP apparatus II (paddle) method with a Vision Classic 6TM dissolution tester and a Vision heater (Hanson, Chatsworth, CA, USA) at 37±0.5 ℃. The samples tested were three commercial AA tablets (reference products), HTs, EPs, and ETs. We used a 5% metaphosphoric acid aqueous solution as the dissolution medium (900 mL), and the revolution speed was 50 rpm. At predetermined time points (5, 15, 30, 60, 90, 120, 180, 240, 300, 360, 480, and 720 min), we withdrew aliquots (5 mL) and passed them through a 0.45-μm polyvinylidene fluoride membrane filter. We replenished the medium with an equivalent volume (5 mL) of fresh 5% metaphosphoric acid aqueous solution to maintain a constant in vitro dissolution environment. We measured the amount of dissolved AA in the filtrate by UV analysis, as described above.
Calculation of the Similarity Factor (f2). To compare the dissolution behavior of the reference and test formulations, f2was calculated as follows: 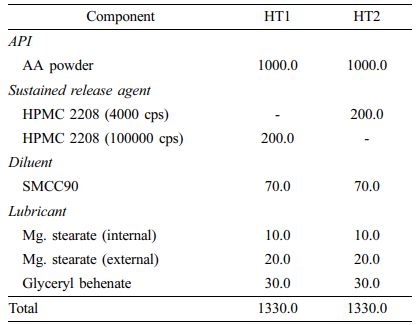 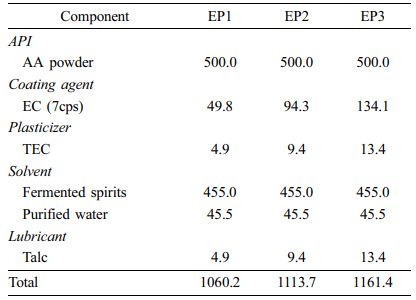 where C0 is the initial concentration of the drug and Ct is the concentration of the drug at time t. Q0 is the initial amount of drug loaded in the matrix, and Qt is the amount of drug that remains in the matrix at time t. Mt/M∞ is the fraction of the drug released at time t. n valueis the release exponent. k1, kKP,and kHCare the rate constants of the first-order model, Korsmeyer-Peppas, and Hixson-Crowell equations, respectively. The first-order kinetic model predicts a dependence of drug release on the concentration gradient between the static aqueous layer adjacent to the solid surface and the bulk liquid.28 Korsmeyer-Peppas model describes the diffusion-controlled drug release from a polymeric system, evaluating the release exponent (n value) of a time-dependent process.28 The Hixson-Crowell cube root law characterizes the release if there is a change in surface area and diameter of particles or tablets, indicating the erosion and diffusion mechanism.28 We applied the time points at which the dissolution rates plateaued (around 80-90%) for kinetic analyses. The correlation coefficients of determination and release rate constants are listed in Table 6. In the case of the reference curve, the coefficient of determination (r2)values were 0.819, 0.994, and 0.967 for the first-order, Korsmeyer-Peppas, and Hixson-Crowell equations, respectively. Similar trends were observed with the HT7 and ET1 formulations. Thus, the Korsmeyer-Peppas model provided the best fit regarding release kinetics.
The drug release mechanism from the polymeric matrix including the polymer erosion has been reported to follow three steps: first, the dissolution medium penetrates the matrix; then, matrix swelling with dissolution or matrix erosion occurs; finally, the dissolved drug is released into the surrounding dissolution medium.29 Drug release is controlled by the rate of penetration of the dissolution fluid into the matrix, in which aqueous front formation depends on the compressed structure.30 The release exponents (n value) of HT7 and ET1 were 0.787 and 0.714, respectively. As the values were in the range of 0.5 < n < 1, we noticed that the drug releases were followed by non-Fickian diffusion, which indicates the mechanism of diffusion- and/or erosion-controlled dissolution. 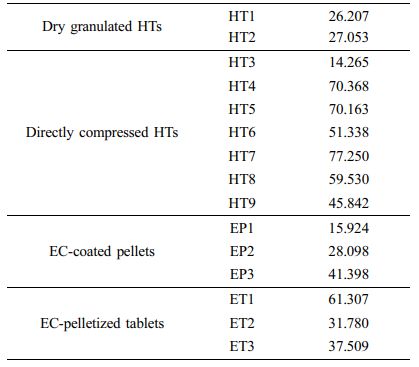 In this study, we successfully developed sustained release AA tablets in the form of HTs and ETs using direct compression and/or fluidized coating. We obtained a dissolution reference curve from the average data of three commercial tablets and used it to calculate the similarity factor. We thus suggest dissolution tolerances of 15-40% (1 h), 25-70% (3 h), 50-90% (5 h), and ≥80% (8 h). The drug release rates of two selected formulations (HT7 and ET1) were within the limit of ±15% of the reference curve, when using the Korsmeyer-Peppas model.