Vanillin (VA) was extracted from cotton stalk lignin by UV photocatalysis method using Co2+/Ni2+ as a catalyst, the yield of which was quantitative analyzed through gas chromatography-mass spectrometer and high performance liquid chromatography. The structure and thermal properties were compared between extracted and standard VA, which showed basically consistent. PP/VA materials characterized by fourier transform infrared spectroscopy were prepared by melt intercalation and subjected to 20 days thermal oxygen aging. Thermal gravimetric analysis and oxidation induction time results showed VA (0.9 wt%) could improve the thermal stability of polypropylene (PP) by 33.4 ℃ and 49.03%. Differential scanning calorimetry confirmed that VA increased the crystallinity of PP reaching to 15.70%. After 20 days aging, mechanical test showed the impact strength and breaking elongation retention of PV-3 (0.9 wt%) were 10.0% and 14.8% higher than those of PP; surface scanning electron microscopy showed that PV-3 had the most smooth surface.

This study provided a simple, environmentally friendly and high selectivity extraction method of vanillin (VA) with excellent yield; it also showed a new choice of natural and harmless antioxidant for improving the antioxidant capacity of polypropylene (PP). Moreover, it was of great significance to the recycling of bio-based resources and the sustainable development of natural environment. 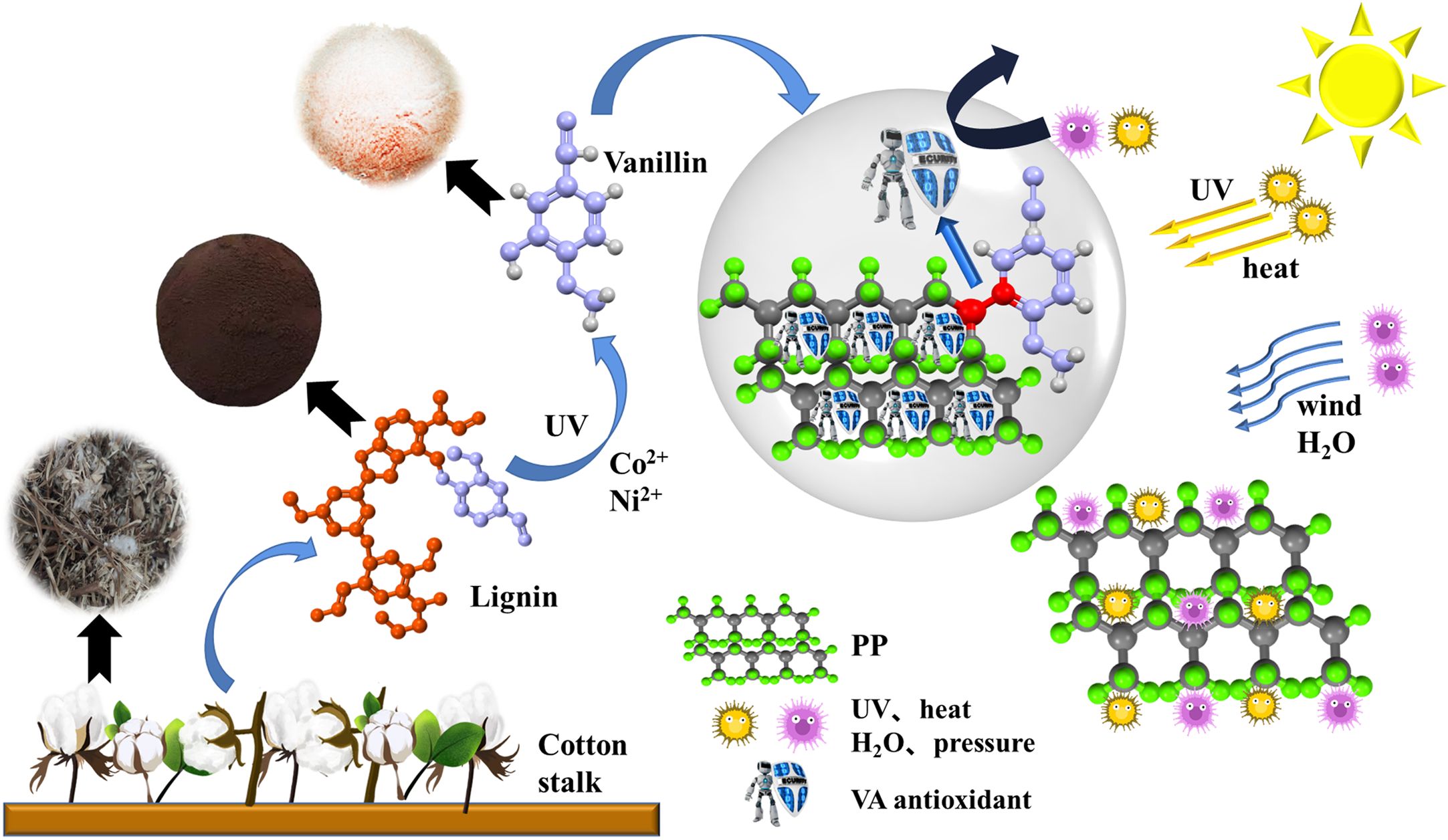 This work was funded by the National Natural Science Foundation of China (No. 21764013) and the Postgraduate Research Innovation Project of Xinjiang Uygur Autonomous Region (XJ2020G033 and XJ2021G032).

Information is available regarding the experimental procedure for the extraction of LG from cotton stalk, extraction of VA by UV photocatalysis from LG, and characterization between exracted VA and standard VA. The materials are available via the Internet at http://journal.polymer-korea.or.kr

Polypropylene (PP) is one of the five most widely used general plastics in the world, which is white granules, odorless and non-toxic.1 While because of the special tertiary carbon structure, the tertiary hydrogen reaction activity of PP is very reactive, so that PP is easy to be degraded by thermal oxygen and light in processing, storage and using.2 Antioxidants are often added to avoid this phenomenon during the processing of PP.3 At present, the most commonly used antioxidants are mainly blocked phenols.4 However, in recent years more and more safety problems such as easy migration and toxicity of antioxidants have appeared in food packaging materials. It is of great significance to find a kind of healthy and safe natural antioxidants with good antioxidant capacity for PP.5 Nanni et al.6,7 studied the effects of natural extracts from grape skins, seeds and stems produced in the process of wine production on the thermal stability of PP through UV and thermal aging, and compared them with common industrial antioxidants. The results showed natural extracts from grape seeds, which was able to protect PP against UV aging, presented the best antioxidant effect, and the oxidation induction time (OIT) value of which had been the highest among all the investigated samples. This had been due by the ability of working both as radical scavenging and UV absorber.
Cotton stalk lignin (LG) is a kind of complex polyphenolic natural amorphous polymer compound, which is composed of phenylpropane structural unit connected by ether bond and C-C single bond and has an amorphous three-dimensional network molecular structure.8 Because of many phenolic hydroxyl groups and alcohol hydroxyl groups, LG structure produces strong hydrogen bond and intermolecular force, which has thermoplasticity and high glass transition temperature.9 In the molecular structure of LG, there are phenolic hydroxyl groups and other active groups, so it can produce downstream aromatic products such as syringyl, guaiacyl, p-hydroxyphenyl and vanillin through redox, alcoholysis, photolysis, sulfonation, alkylation or graft copolymerization reaction. These active groups and reaction performance of LG are the important way to expand its application. He et al.10 prepared PP/LG composite materials and carried out artificial accelerated aging test on it to explore the influence of LG as the antioxidant on PP. The results showed LG could effectively prevent the surface cracks and furrows of PP after aging, and the mechanical properties of PP were well preserved. China is a big producer of cotton and Xinjiang's cotton output accounts for about 70% of the national cotton output. However, the comprehensive utilization rate of cotton stalk in China is low, and a large amount of cotton stalk is burned, which pollutes the environment and wastes resources.11 If the cotton stalk rich in LG could be fully utilized, its economic and social benefits are very great. With the speeding up of industrialization and resources crisis, LG as a kind of green biomass resources would get to be studied in depth.
Vanillin (VA, 4-hydroxy-3-methoxy-benzaldehyde) is one of the most important degradation product of LG and widely used spices nowadays, which is cheap and easy to obtain. Because of the phenolic hydroxyl group, aldehyde group and other chemical functional groups, VA has good thermal stability, oxidation resistance and reactivity, which it is not easy to decompose after heating sublimation.12 The demand for VA is increasing rapidly due to its wide application prospects in antioxidant, anticancer, and anti-mutagenic activities. Nowadays, the main source of VA is the conversion of natural biomass resources, such as eugenol, guaiacol and ferulic acid, into VA by chemical conversion and synthesis,13 besides, there are a few reports on the extraction of VA by UV photocatalysis method from LG. Kansal et al.14 used TiO2 and ZnO as two kinds of catalysts to degrade LG, and found that ZnO had better photocatalytic effect. The combination of catalyst and oxidant could promote the degradation of LG and the experimental results showed the laden ZnO could also effectively catalyze the degradation of LG in pulp and paper waster. Erdocia et al.15 used 320 W UV lamp and nano TiO2 as a catalyst to photodegrade LG in the presence of NaOH, to explore the effects of reaction time on the molecular weight of LG and the distribution of degradation products. The results found the degradation products were mainly VA, syringaldehyde, catechol, and p-hydroxyphenylbutanone. However, the selectivity of the above studies was not good, the yield of VA did not exceed 50%.
In this work, VA was extracted from LG by UV photocatalysis method using Co2+/Ni2+ as a catalyst with the yield of 84.01%. The antioxidant capacity and mechanical properties of PP/VA materials subjected to 20 days thermal oxygen aging were researched. This study provided a simple, environmentally friendly and high selectivity extraction method of VA with excellent yield; at the same time, it showed a new choice of natural and harmless antioxidant for improving the antioxidant capacity of PP. Moreover, it was of great significance to the recycling of bio-based resources and the sustainable development of natural environment. 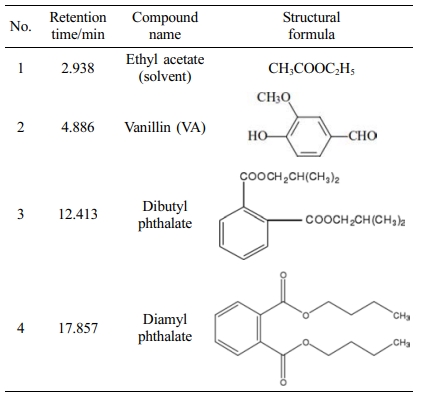 In the work, VA was extracted from cotton stalk LG by UV photocatalysis method using Co2+/Ni2+ as a catalyst, the yield of which was quantitative analyzed through GC-MS and HPLC. The orthogonal analysis results showed the optimum reaction conditions with the yield of 84.01% to be as followed: the reaction temperature of 55 ℃, the UV lamp wattage of 1000 W, the reaction time of 4 hours, and the catalyst mass ratio of 15 wt%. The structure and thermal properties of extracted and standard VA were studied by NMR, FTIR, XRD and TGA, which showed basically consistence. This demonstrated this method of UV photocatalysis using Co2+/Ni2+ as a catalyst had high selectivity and yield. The antioxidant capacity and mechanical properties of PP/VA materials were investigated. The results showed that the crystallinity of PP was improved due to the introduction of VA, thus enhancing the antioxidant capacity and mechanical properties of PP. After 20 days thermal oxygen aging, PV-3 (0.9 wt%) had the best performance in crystallinity, the mechanical properties retention and surface morphology, which still represented well in tensile properties after blowing molding into film, thus broadening the application range of PP membrane materials. This study provided a simple, environmentally friendly and high selectivity extraction method of VA with excellent yield; it also showed a new choice of natural and harmless antioxidant for improving the antioxidant capacity of PP. Moreover, it was of great significance to the recycling of bio-based resources and the sustainable development of natural environment.