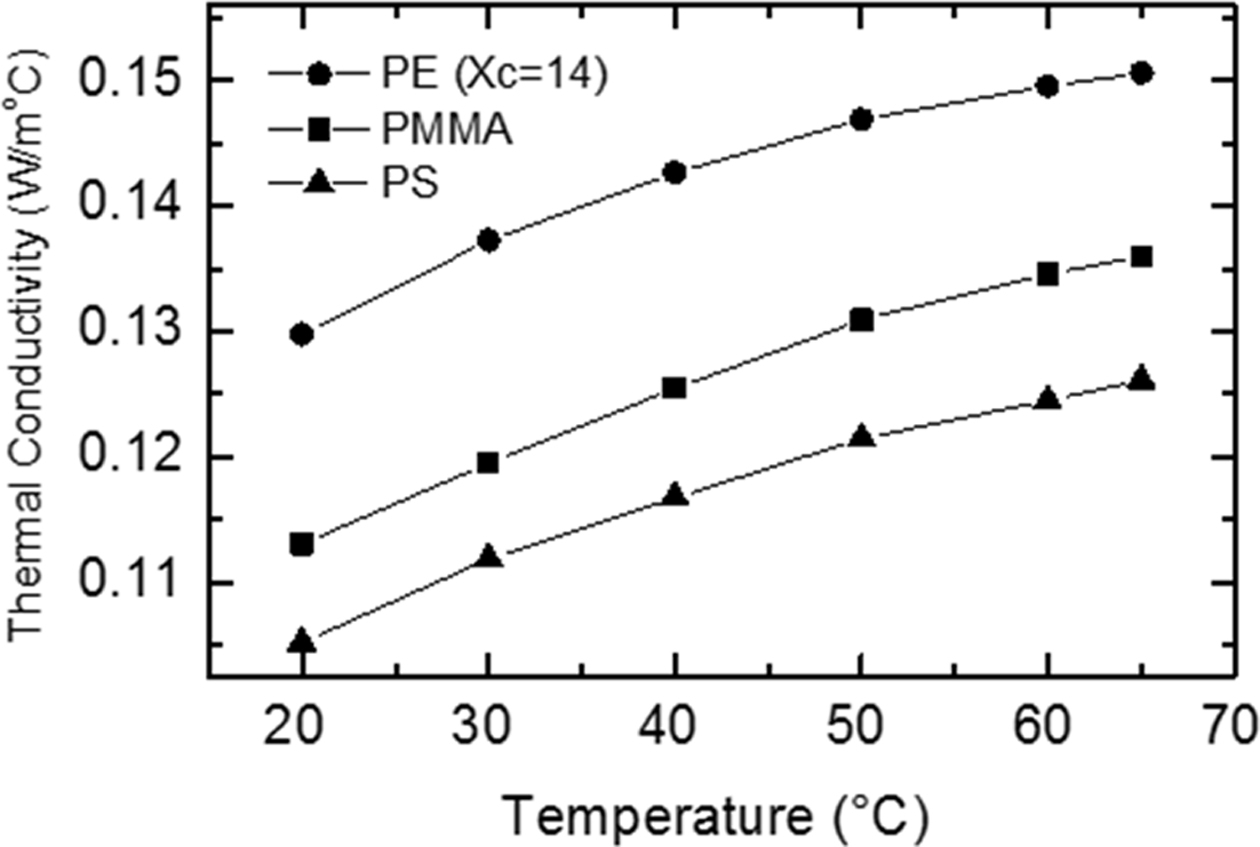 The authors thank the University of Applied Science (Jordan), and the Jordanian Pharmaceutical Manufacturing Company for their cooperation

Nowadays, polymeric materials play a crucial role in our daily life. They are widely used in various fields, including aeronautics and astronautics devices, thermal insulators, integrated circuit, environmental protection and biomedical science.1-4 The importance of polymers has become much more emphasized as its applications are numerous and varied. Poly (methyl methacrylate) (PMMA), polystyrene (PS) and polyethylene (PE) have several applications in different fields including aerospace, automotive, electronics, packaging and medical applications.5 They have several desirable properties, including high strength, excellent dimensional stability, and exceptional optical clarity. These materials are widely used in adhesives, lens, neon signs, automotive signal light, paper coatings, etc. However, just like most polymers, they are thermal insulation materials, which limits their applications. In order to maximize their performance, polymers are increasingly required in situations that challenge the thresholds of their thermal capabilities. It is therefore important to study the thermal properties of these materials under a wide range of conditions relevant to industrial processing and use.
Heat conduction in polymers is mediated mainly by the elastic wave of phonons only as the result of the molecular vibration of the lattice, where there are no free electrons.6 Thermal conductivity of polymers can be described by Debye and Eiermann model7-10 as:

where, K is the thermal conductivity, Cv is the heat capacity at constant volume, ρ is the density, v is the propagation speed of the phonons through the lattice (sound velocity) and λ is the mean free path of phonon. Under steady-state conditions when the temperature is constant, the thermal conductivity can be calculated using the relation10-12:

where Δq/Δt is the heat flow rate, A is the sample cross section area, ΔT is the temperature difference between the specimen faces, and ΔL is the specimen thickness. The thermal diffusivity D can be calculated from the thermal conductivity using the relation7: 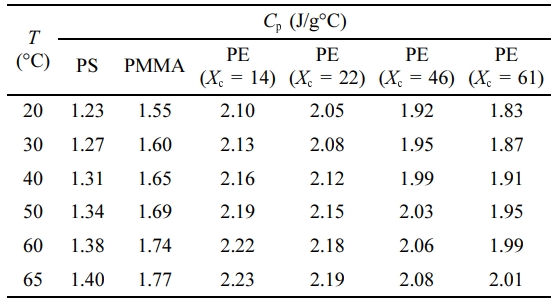 Sheet samples of PE (4, 5, 10 mm thick), PS (5 mm thick) and PMMA (4, 5 and 10 mm thick) were used. Each sample was cut as a square with 30 cm side length. In order to change the degree of crystallinity of the PE samples, three samples were heated up to 180 oC for 2 h after inserting each one in a square stainless steel mold with 30 cm side length. The first sample was cooled at 3 oC/min rate, the second at 1 oC/min rate and the third sample at 0.5 oC/min rate, and then the degree of crystallinity was measured for the three samples using differential scanning calorimeter (DSC).16 DSC analysis have shown that the original sample of PE (before heating) has a degree of crystallinity of 14% (more amorphous). The degree of crystallinity is found to increase with decreasing the cooling rate. The degree of the crystallinity for the three PE samples (after heating and cooling process) is found to be 22%, 46%, and 61% for a cooling rate of 3, 1, and 0.5 oC/min, respectively.
The measurements of the thermal conductivity have carried out using a computerized thermal conductivity apparatus (Figure 1). This apparatus measures the thermal conductivity using heat flowmeter steady-state method.17 The specimen was sandwiched between two rubber sheets to remove the air gaps, and then it was placed between a hot plate and the heat flowmeter which is attached to a cold plate. The hot and cold plates are maintained at constant temperatures, the temperature of the two plates was measured using surface thermocouples. The apparatus is surrounded by insulating jacket to minimize the heat loss.

where L is the sample thickness. This equation implies that a plot of the measured thermal resistance versus sample thickness should yield a straight line with slope (1/K) and intercept equals to the contact resistance.23,24 The calculated values of the contact resistance for PMMA and PE polymers from the intercepts of the lines in Figure 4 is listed in Table 2.
Degree of Crystallinty Dependence. The temperature dependence of the thermal conductivity was measured for four PE samples with different crystallinity (14, 22, 46, and 61%). As displayed in Figure 5, the thermal conductivity increases with increasing the degree of crystallinity. This is due to the higher ordered-structure in the samples with higher crystallinity; a case yields less boundary scattering and thus higher phonon mean free path.25,26 The results also show that the thermal conductivity for the first three samples (with crystallinity 14, 22 and 46%) increases with temperature, but for the fourth one (61% crystallinity) it decreases with temperature. This is because the amorphous content is larger than the crystalline one in the first three samples, so they behave similar to the amorphous polymers. In the fourth sample, the crystalline part is larger than the amorphous one, thus it behaves like a crystalline polymer and its thermal conductivity decreases with temperature. 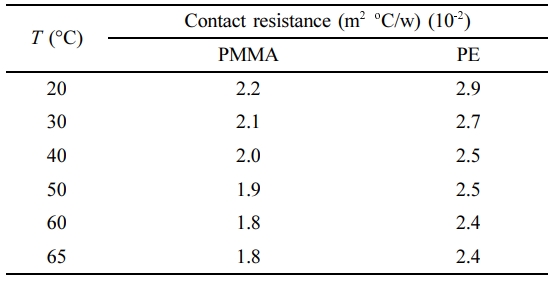