In this paper, two kinds of conductive hybrid free-standing films (polypyrrole (PPy)-SiO2 and PPy-poly(3,4-ethylenedioxythiophene) (PEDOT) hybrid) were successfully prepared by employing the consecutive vapor phase polymerization (c-VPP) technique. Through the spontaneous interface polymerization of the monomer gas molecules in the vapor/aqueous interface of the oxidant in water, free-standing films were synthesized via oxidative-coupling polymerization. The as-prepared free-standing films were flexible to a certain degree, robust, and can maintain their structure even without any support of donor substrates. Importantly, chemical compositional and morphological analyses on the top-side and bottom-side surface of the films provided evidence for a top-down growth mechanism in which the arriving monomer vapors diffuse to the initially formed polymer product layer to reach active oxidant film for chain growth. Intricate film morphology and the electrical properties of the films can be effectively adjusted by controlling the order of monomer polymerization, the type of monomers to be used, and the polymerization time in each monomer chamber

Two kinds of conductive hybrid free-standing films were successfully prepared by employing the consecutive vapor phase polymerization technique. The as-prepared free-standing films were flexible to certain degree, robust and can maintain its structure even without any support of donor substrates. Importantly, chemical compositional and morphological analyses on the top-side and bottom-side surface of the films provided evidence for a top-down growth mechanism.

Since the highly successful discovery of conducting polymers (CPs), also known as conjugated polymers, in the late 1970 s,1 widespread applications have been discovered due to their high conductivity, compatibility, and easy processability.2-4 Numerous types of CPs (e.g., poly(3,4-ethylenedioxythiophene) (PEDOT), polypyrrole (PPy), polythiophene, and polyaniline have been developed which opened a new array of possibilities for almost any desired applications such as in biomedical applications,5 strain sensors,6,7 chemical sensors,8-10 “green electronics”,11 and in solar cells.12 Regarding the conductive polymers, PEDOT and PPy, and their derivatives are frequently employed in various applications.13,14 Free-standing conductive films have attracted a great interest due to its high potential in various applications such as in high-performance energy devices,15 biomedical devices, for instance, bio-hybrid actuating devices,16 flexible thermoelectric devices,17 and nanowire films for supercapacitors.18 With these technological advancements, there is a need to have a deeper understanding of how conductive free-standing films propagate and grow during the fabrication process; in this case, the method employed in producing free-standing films is vapor phase polymerization (VPP). In this given the circumstances, there would be a question regarding the controversial layer growth mechanism on how conductive polymers grow, specifically on a vapor/water interface, during VPP. According to previous studies, there are two recognized growth mechanisms surrounding intrinsically CPs on thin films growth; top-down process19-21 and the bottom-up process.22-25 A top-down approach is a type of mechanism in which the polymerization takes place on the surface of the oxidant or the bulk oxidant, it is also called monomer diffusion because the monomer diffuses through the recently formed polymer layer to reach the oxidant for polymerization.20 While the bottom-up process, or oxidant diffusion, the oxidant layer migrates upward through the forming polymer layer by means of capillary action. The movement of this oxidant layer served as a replenishment to the spent oxidant used by the initially formed polymer layer.22,23
In this work, the growth mechanism of the fabricated free-standing PPy-SiO2 and PPy-PEDOT films polymerized on a vapor/water interface via the consecutive-VPP (c-VPP) method is demonstrated. The sequential polymerization of the PPy film followed the SiO2 film will provide the evidence as to what type of growth mechanism is occurring during the process. To provide a more coherent report, the procedure is repeated for reversed polymerization, tetraethyl orthosilicate (TEOS) followed by pyrrole (Py) monomer. Moreover, the growth mechanism organic-organic PPy-PEDOT free-standing film was also analyzed. The second aim of this paper is to provide a facile method to synthesize hybrid conductive free-standing films through the process of c-VPP. The free-standing films were analyzed for electrical properties, surface, and cross-sectional components and to further understand the formation mechanism, the films were characterized by energy dispersive spectroscopy (EDS) elemental mapping as well as surface morphological analysis.

Materials.TEOS (Samchun Pure Chemical Co., Seoul, Korea) as a precursor for silica-based inorganic network structure, Py (Acros Organics, New Jersey, USA) as a precursor for PPy, 3,4-ethylenedioxythiophene (EDOT) (Sigma-Aldrich, St. Louis, MO, USA) as the monomer for PEDOT, Iron (III) chloride hexahydrate (FeCl3∙6H2O) (Sigma-Aldrich, St. Louis, MO, USA) as the oxidizing agent and dopant were used without further purification.
Fabrication of PPy-SiO2 and PPy-PEDOT Free-standing Thin Films. To prepare PPy-SiO2 free-standing thin films, 0.41 g of FeCl3∙6H2O was diluted in 3 mL distilled water in a petri dish (31.5 mm in diameter) to prepare 0.5 M FeCl3 aqueous solution. Chemical polymerization of Py would be a reasonable approach when Iron (III) chloride and water are used as the oxidizing agent and solvent respectively in terms of conductivity characteristics.26-28 The prepared oxidant solution in the petri dish is sequentially polymerized with Py vapor at ambient conditions for 1 and 3 h and immediately thereafter exposed to TEOS vapor at 60 oC for 3 and 1 h respectively as described in Scheme 1(a). The total polymerization time in the two chambers is 4 h. To avoid conjectures and to closely analyze the growth mechanism of free-standing films prepared on a vapor/water interface via c-VPP, the order in which monomers are polymerized was also reversed in which TEOS was first polymerized immediately followed by Py polymerization (Scheme 1(b)). Apart from this, another type of monomer, EDOT monomer instead of TEOS, was used (Scheme 1(c), 1(d)). The same process was applied as well. Note the different temperature levels in each monomer chamber were necessary due to their different vapor pressures. Through the spontaneous interface polymerization of the monomer gas in the vapor/water interface of the FeCl3-oxidant in water,28 free-standing films PPy-SiO2 and PPy-PEDOT were developed. The generated free-standing films were carefully peeled off using a tweezer. The order of the monomer being polymerized as well as the polymerization time in the chambers will provide conclusive evidence as to what type of growth mechanism exists in preparing the free-standing films. Nomenclatures of the films are defined as shown in Scheme 1(e). P, T, and E stand for Py, TEOS, and EDOT monomer, respectively while the subscripts oo and xx are the polymerization time in each chamber. PT series are a set of films in which Py was first polymerized followed by TEOS and if the order of polymerization is reversed TP series films are produced. PE series is a set of films in which Py was first polymerized followed by EDOT and if the order of polymerization is reversed EP series films are produced.
Measurement and Analysis. The resistivity of the films was measured by a multi-meter (HIOKI 3280-10F, Japan) in which silver paste was used as electrodes on both sides of the film. Bending tests were conducted to confirm the mechanical robustness of the free standing films using an in-house multipurpose flexibility test machine (IPEN Co., Korea). The morphologies of the surface and cross-section of the thin films were observed using field emission scanning electron microscope (FE-SEM) systems (TESCAN, MIRA LMH, Czech). The chemical composition of each surface for various free-standing film was analyzed using Energy-dispersive spectroscopy elemental mapping (EDS, Bruker AXS XFlash detector 5010, USA). 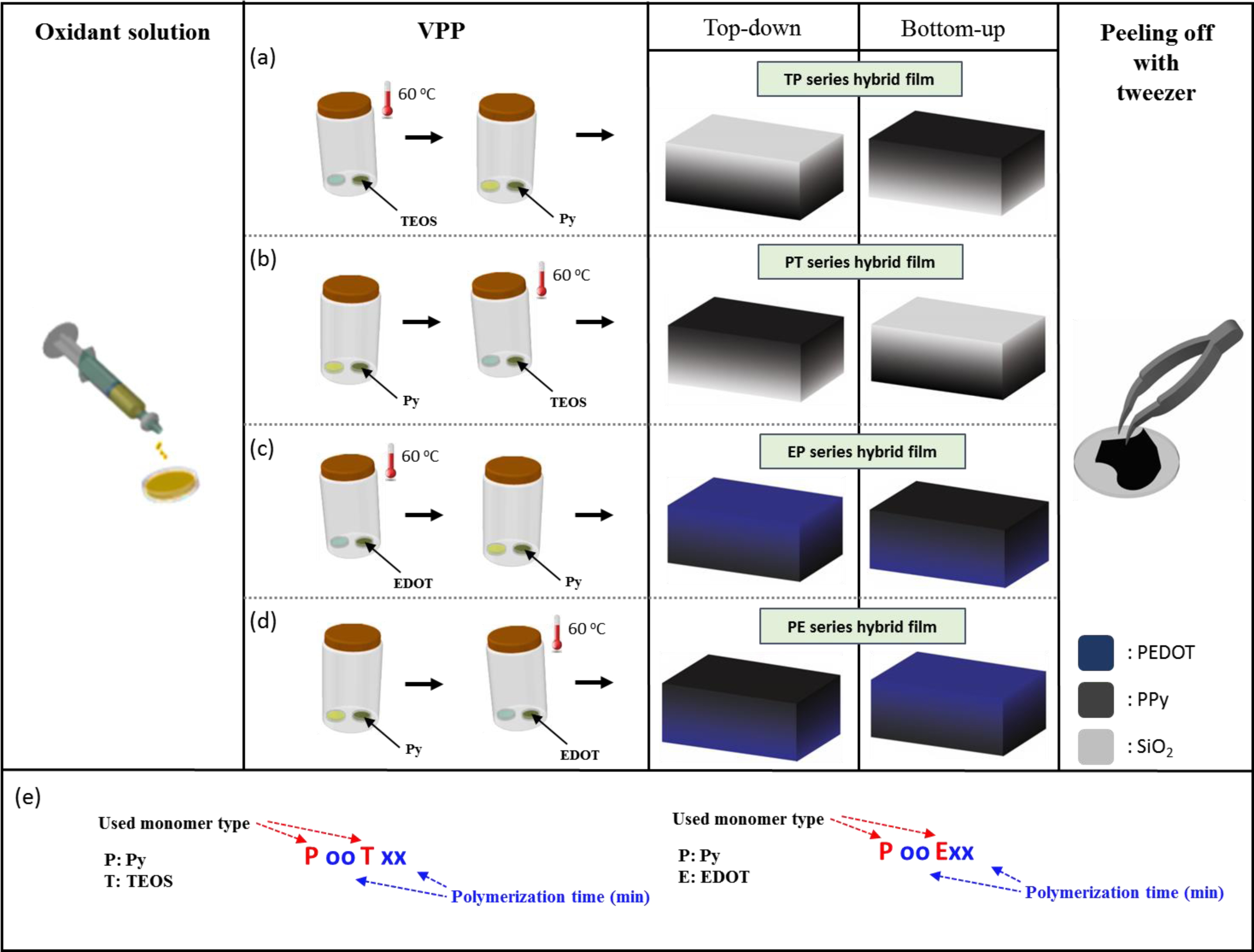 In conclusion, this paper has proposed a facile synthesis mechanism for the formation of hybrid conductive free-standing films at the interface of vapor monomers and oxidant solution. This type of method is a variation to the c-VPP technique in which PPy-SiO2 and PPy-PEDOT hybrid conductive films were successfully fabricated by sequentially polymerizing Py and TEOS and Py and EDOT, respectively on the FeCl3-oxidant in water. Tunable characteristics and film morphology have also been demonstrated. This approach would lend itself well for large-scale fabrication of uniform and large-area conductive free-standing films with intricate film architecture that are advantageous for numerous applications. In addition, the pieces of evidence from this study intimates a top-down growth mechanism, wherein the monomer vapor diffuses through the existing polymer layer to reach the oxidant film for chain growth by means of downward diffusion for the formation of free-standing films formed through the sequential polymerization of two monomers via c-VPP technique. Regardless of the type of monomers used, whether it’s an organic or inorganic monomer the same mechanism applies.