We prepared polymer aerogels based on a conducting polymer, poly(3,4-ethylenedioxythiophene) polystyrene sulfonate (PEDOT:PSS), and silane precursors, such as tetraethylorthosilicate (TEOS) and (3-glycidyloxypropyl)trimethoxysilane (GOPS), and investigated their specific resistance and stress–strain behaviors as a function of electron-beam dose. PEDOT:PSS/silane aerogels were easily made by homogenizing and freeze-drying from the aqueous mixtures. The composite aerogels were irradiated by the high-energy electron beams with a dose ranging from 1 to 50 kGy. Solvent vapor treatment was also used to see the effects of irradiation on the properties of the resulting aerogels. The resistance of high-conductivity aerogels increased when irradiated. PEDOT:PSS/TEOS aerogels became stiffer when irradiated, whereas PEDOT:PSS/GOPS samples peaked the stiffness at 1~5 kGy. Different behaviors were likely from two competitive mechanisms of chemical scission and cross-linking caused by electron beams

Electron beams were irradiated to conducting polymer/silane aerogels fabricated through a freeze-drying method with PEDOT:PSS and silane precursors (TEOS, GOPS). The specific resistance and mechanical stiffness was found to be a function of silane and dose of electron beams. 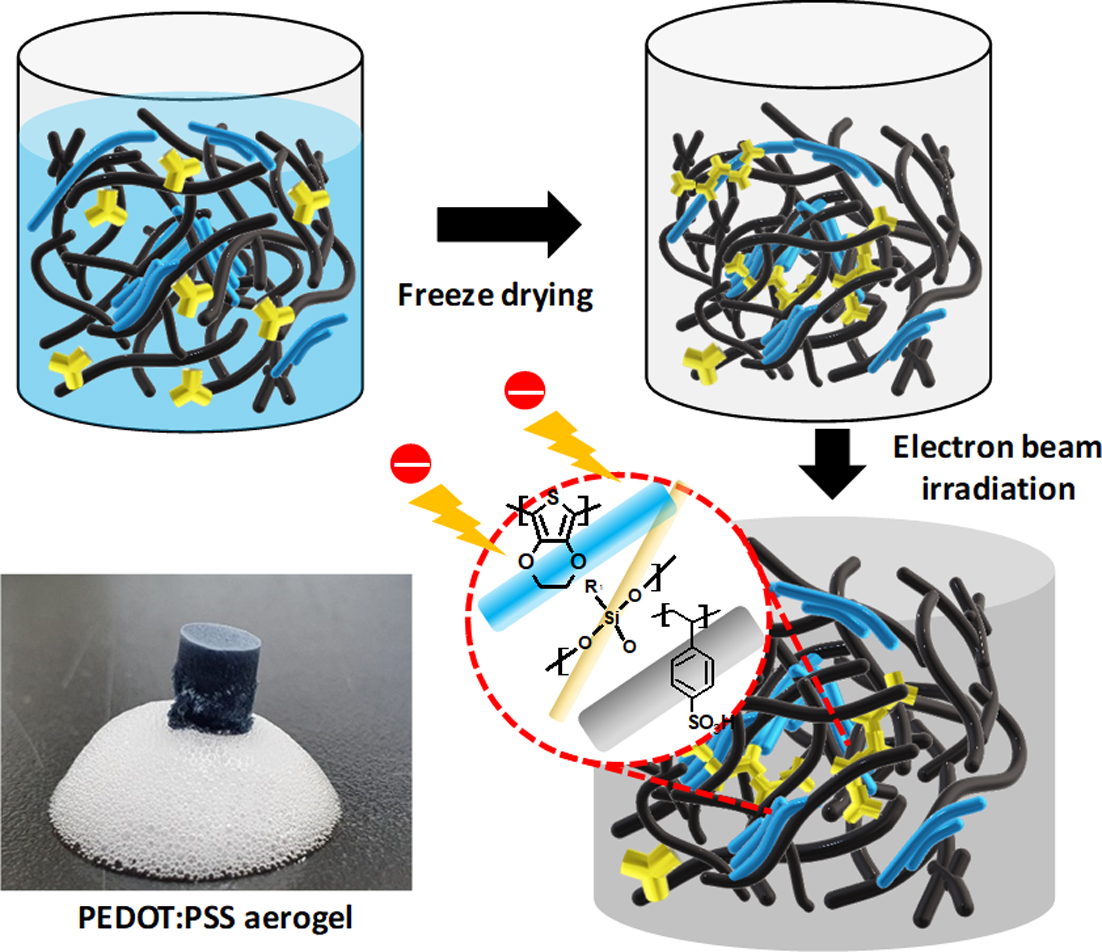 Poly(3,4-ethylenedioxythiophene):poly(styrenesulfonate) (PE-DOT:PSS) is an electrically conductive and water-dispersible polymer complex. The most remarkable feature of PEDOT: PSS is that the electrical conductivity of the PEDOT:PSS can be increased from ~1 to ~103 S/cm, when polar solvents, including ethylene glycol, glycerol, dimethyl sulfoxide, and chloroethanol, are applied.1,2 It has been intensively studied in a wide range of forms such as thin films, hydrogels, organo-gels, and aerogels.3-5 While thin films of PEDOT:PSS are promising for transparent electrodes, its aerogels can be used for energy-related and structural applications. Aerogel is a three-dimensional structure with a high porosity (~90%), a high surface area, and a light weight. It can be easily fabricated through a freeze-drying process.6-9 However, aerogel is often fragile without reinforcing components. For PEDOT:PSS-based aerogels, structural materials like polydimethylsiloxane, polyimide, and cellulose nanofibers have been incorporated to enhance the mechanical properties.9-12 Sol-gel silane precursors, for example, tetraethyl orthosilicate (TEOS), (3-glycidyloxypropyl) trimethoxysilane (GOPS), and aminopropyl triethoxysilane (APTES), can be added to the conducting polymers to reinforce the structures and enhance the robustness.13-18
Radiochemical processing with high-energy irradiation such as gamma rays or electron beams is a non-conventional protocol to induce chemical changes of materials. It has been used for various applications in food, cosmetic, and polymeric products, because the process is fast and versatile. Irradiation energy, rate, and time are the controlling parameters. High-energy irradiation ionizes materials and incudes the formation of free radicals, affecting the chemical bondings and structures of materials.19-22 One can get a large number of bond scissions and/or cross-links of chains through irradiation.
In this work, we investigated the effects of the high-energy electron-beam irradiation on the electrical and mechanical properties of conductive aerogels based on PEDOT:PSS and PEDOT:PSS/silane composites. Aerogels were made through simple mixing of PEDOT:PSS and silane precursors (TEOS or GOPS) as an aqueous dispersion and then freeze drying of the mixtures. We varied the processing parameters, such as the silane precursors (TEOS or GOPS), post-fabrication processing, and electron-beam doses (0–50 kGy), and compared the sheet resistance and strain–stress behaviors. Depending on the sample conditions, electron beams affected the aerogel systems by chemical scission and cross-linking in different degrees. The specific resistance of the aerogels was increased by two orders of magnitude to 1 Ωm when irradiated by electron beams. We observed from compression tests that a high dose of electron-beam induced enhancement of mechanical stiffness of the PEDOT:PSS/TEOS.

An aqueous dispersion of poly(3,4-ethylenedioxythiophene): poly(4-styrenesulfonate) (PEDOT:PSS; Clevios PH1000) was purchased from Heraeus Epurio (USA). Tetraethylorthosilicate (TEOS), (3-glycidyloxypropyl)trimethoxysilane (GOPS), and dimethyl sulfoxide (DMSO) were obtained from Sigma-Aldrich, Inc. (USA). The PEDOT:PSS dispersion and silane precursor (0.2 vol%) were mixed and homogenized at 10000 rpm for 1 h by a homogenizer (IKA Ultra-turrax T-25). The mixture of PEDOT:PSS/silane was placed in a polystyrene culture plate and frozen on liquid nitrogen for 20 min. The water solvent was then sublimed at -45 °C in a freeze dryer (Eyela FDU-1200) for 1 day. The resulting aerogels have a cylindrical shape with a typical height of 5–8 mm and diameter of 5–6 mm. For DMSO treatment, the aerogels were placed in a vacuum-tight desiccator containing 10 mL of DMSO. The container was then evacuated by using a vacuum pump for 15 min and heated at 150 °C on a hotplate for 30 min. After the DMSO-vapor annealing, the aerogels were dried in a vacuum oven in 80 °C for at least 2 h. For high-energy irradiation, the aerogel composites were placed in a vacuum-sealed plastic bag and exposed to electron beam with an energy of 2.5 MeV at the Advanced Radiation Technology Institute, an affiliate of the Korea Atomic Energy Research Institute. The irradiation doses were 1, 5, 10, and 50  kGy at the rate of 10  kGy/h. Scanning electron microscopy (SEM) images were obtained using a Hitachi S-3400N microscope (Japan). Electrical resistance was measured with either a potentiostat (Zivelab SP1) or a digital multimeter (Agilent 34401A). Compression force was measured with a force-gauge equipment (Mark-10 Advanced Digital Force Gauges Series 5) and a compressed machine (Mark-10 Motorized Compression Test Stand) operating at 15 mm/min.

We prepared various PEDOT:PSS and PEDOT:PSS/silane aerogels with various processing methods and studied their electrical and mechanical properties as a function of the processing conditions. Synthesis of the composite aerogels was conducted by homogenizing and freeze-drying of the mixture of PEDOT:PSS dispersion and silane precursors. The samples were subjected to the formation of the covalent bonds by TEOS and GOPS, removal of excessive PSS components by DMSO treatment, and radiochemical modification of the composites by electron beams. Combinations of these processing factors resulted in changes in the specific resistance and stress–strain behaviors. The specific resistance of the aerogels with a high electrical conductivity suffered from a steep increase from ~10-2 Ωm to 1 Ωm when irradiated by high-energy electron beams up to 50 kGy, although the values of the low-conductivity samples were steady at 10 Ωm. PEDOT:PSS/TEOS aerogels became stiffer when irradiated at 50 kGy, while PEDOT:PSS/GOPS samples were the stiffest at 1~5 kGy. Competitions of two mechanisms of irradiation-induced changes in the structures of chemical bonding, chemical scission and cross-linking, seem to be responsible for the different behaviors of the aerogels.