Porous carbon nanofibers were prepared via electrospinning of polyacrylonitrile (PAN)-based blend solutions and effects of miscibility of the blended polymers on pore structure were investigated. Two sacrificial polymers, poly(vinylidene fluoride) (PVDF) and poly(styrene-co-acrylonitrile) (SAN), were chosen as a sacrificial component to yield porosity after carbonization. The miscibility of PAN with each sacrificial polymer was evaluated both theoretically and empirically. Analyzing solubility parameters revealed that PVDF had higher chemical affinity with PAN due to dipole-dipole interaction than SAN. Lower value of Flory-Huggins interaction parameter of PAN with PVDF (0.52) than with SAN (1.19) quantitatively confirmed the better miscibility of PAN-PVDF. In dynamic mechanical analysis of PAN/PVDF blend films, individual loss tangent (tan d) peaks (i.e., glass transition peak) for PAN and PVDF were observed but they were shifted to each other, indicating partial miscibility. In PAN/SAN films, however, the peak shift of PAN was negligible. These results coincided well with the theoretical analysis. After carbonization, the blend nanofibers exhibited high porosity with different pore structures; elongated shape for PVDF and round shape for SAN system. The pore structure discrepancy in the two systems was ascribed to the miscibility difference of each sacrificial polymer with PAN matrix.

Electrospun carbon nanofibers were prepared using polyacylonitrile (PAN)-based blend solutions and effects of miscibility of the blended polymers on pore structure was investigated. Poly(vinylidene fluoride) (PVDF) and poly(styrene-co-acrylonitrile) (SAN) were chosen as a sacrificial component. The carbonized blend fibers exhibited different pore structures due to miscibility difference with PAN; elongated shape for PVDF and round shape for SAN system. 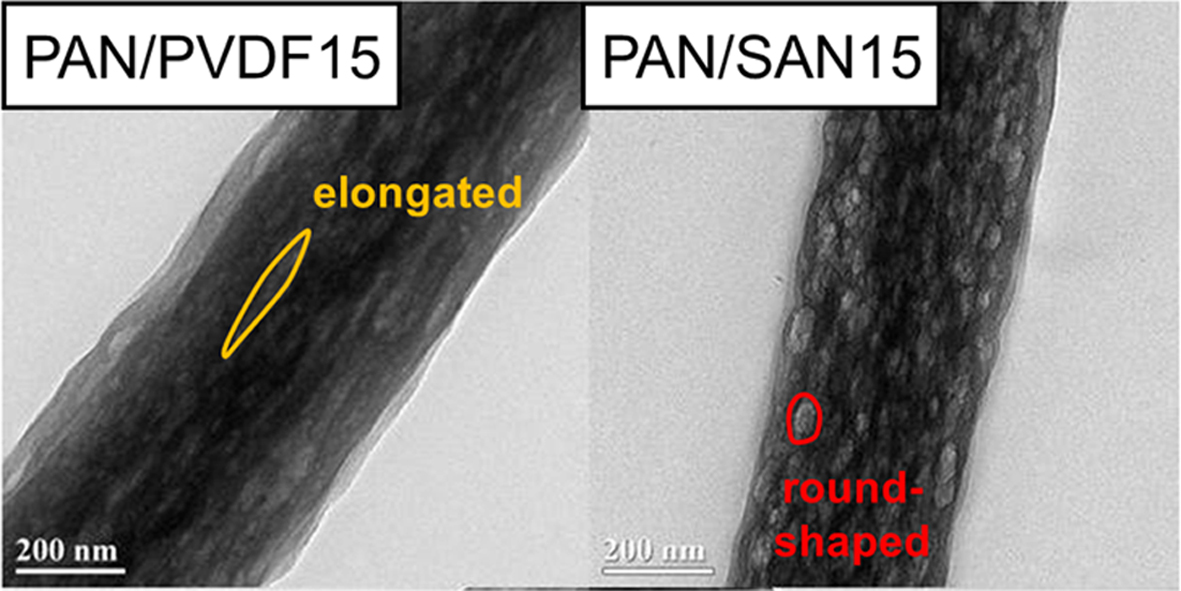 This research was supported by the National Research Foundation of Korea (NRF-2020R1C1C 1009340) and the Korea Institute of Energy Technology Evaluation and Planning (KETEP) and the Ministry of Trade, Industry & Energy (MOTIE) of the Republic of Korea (No. 20194010201840).

Porous carbon nanofiber is widely used in the fields of gas storage, separation and purification, catalyst carriers, and electrode materials due to its unique mechanical and thermal
properties, chemical inertness and high specific surface area.1-8 Its high specific surface area, one of the most distinguishing features of porous carbon nanofiber, is spotlighted mostly in the fields of adsorbent and electrochemical fields such as anode material for lithium ion batteries and cathode material for supercapacitor. The desired pore structure depends on its application. In the fields of adsorbent, El-Merraoui et al.9 suggested that the adsorbed amount is mainly dependent on particularly the structure of micropores. Lee et al.10 reported that the shallow micropores are advantageous in adsorbing formaldehyde. On the other hand, mesopores are desirable in the applications of lithium-ion batteries and supercapacitors due to trapping of the micropores.11
Several methods to prepare porous carbon nanofiber and to control the pore structure have been studied by many researchers. Generally used method is activation.12-14 However, the activation method has some drawbacks such as requirement for additional equipment set up and extra step when post-treated after carbonization. Thus, other methods that create pores directly during carbonization are also being explored. Wang et al.15 controlled the heating rate of stabilization and carbonization steps to prepare porous carbon nanofiber. The specific surface area of the resulting carbon nanofibers increased at higher heating rates. Other researchers blended inorganic materials into PAN solution as a sacrificial material.16,17
One of the most outstanding ways to drastically increase the specific surface area is to prepare the fiber with a polymer blend solution. The precursor polymer is blended with a sacrificial polymer which can be eliminated by pyrolysis or solvent extraction. The sacrificial polymer leaves pore throughout the fibers and increases the specific surface area after proper treatment. Tran et al.18 blended PAN with Nafion, where Nafion was used as a sacrificial polymer. The resultant porous carbon nanofibers exhibited specific surface area up to 1600 m2/g with a large fraction of mesopores, while that of the fibers spun from pristine PAN solution exhibited 339 m2/g. Other researchers used poly(acrylonitrile-co-methyl methacrylate) or poly(styrene-co-acrylonitrile) (SAN) as a sacrificial polymer.2,7 In the study by Zhang et al.,19 as-spun PAN fibers blended respectively with poly(ethylene oxide), cellulose acetate and poly (methyl methacrylate) were treated with solvent for the extraction of the sacrificial part prior to heat treatment. These methods are available not only for the PAN-based fibers but also the fibers based on other polymers.4
There have been many attempts to increase the specific surface area by spinning the polymer blend solution dope, but the resulting pore structure of the fibers was not discussed in terms of the polymer miscibility. Since the pore structure of the carbonized fiber is affected by the phase separation behavior of the precursor fiber, the polymer miscibility can be a useful parameter to predict and analyze the pore structure of the fiber. In this study, PAN-based blend solutions were electrospun to fabricate precursors for carbon nanofiber. PAN was blended with poly(vinylidene fluoride) (PVDF) and SAN, respectively. PAN is a widely used precursor which shows high carbon yield after carbonization. PVDF and SAN, on the other hand, decompose during heat treatment. The resultant carbon nanofibers were discussed in terms of solution miscibility and the morphology of the fibers.

Materials.PAN (Mw ~ 150000), PVDF (Mw ~ 275000) and SAN (Mw ~ 165000; AN content of 25 wt%) were purchased from Sigma Aldrich (USA). N,N-dimethyl formamide (DMF), purchased from Duksan (Korea), was used as a common solvent.
Solution Preparation and Electrospinning.The blend solutions were prepared by dissolving PAN and sacrificial component in DMF. The mixture was stirred at 60 °C for 6 h. The solution concentrations were fixed to 12 wt% and each blend was prepared in the ratio of 95:5, 90:10, 85:15 and 80:20 for PAN:PVDF or SAN. The solutions were coded as PAN/XY where X and Y are the sacrificial polymer and its weight fraction, respectively.
The blended solutions were then poured into the syringe. The solutions were pushed out through a needle with diameter of 0.5 mm at a flow rate of 3 mL/h. The fibers were collected on rotating drum under 17 kV while tip-to-collector distance was fixed at 15 cm.
Characterization of the Blend Solutions.Prepared solutions were optically analyzed with an optical microscope (Olympus BX51, Olympus, Japan) to ensure that the solution is stable during electrospinning process. A droplet of as-dissolved solution was taken on the slide glass. The droplet was observed at magnification of 50x. The diameter of the spherical domains of the sacrificial polymers was measured and average of 200 values was used as the representative value of each blend solution. Standard deviations of the diameters were also calculated. Same procedure was conducted after keeping the solution at room temperature for 4 h to evaluate the phase stability.
The solutions were casted in films for dynamic mechanical analysis (DMA) to measure the glass transition temperature (Tg) using Q800 (TA instruments, USA). The films were casted on the glass plate and dried at 60 °C for 48 h. The casted films were cut in size of 4 cm by 1 cm for the DMA measurement. The frequency and heating rate were 1 Hz and 5 °C/min, respectively.
Carbonization of the Electrospun Nanofibers. The as-spun fibers were stabilized under air atmosphere prior to carbonization. The flow rate of air and the heating rate were 200 cc/min and 1 °C/min, respectively. The fibers were held at 230 °C for 1 h and at 270 °C for 30 min. The stabilized fiber mats were then treated at 800 °C for 1 h at the heating rate of 5 °C/min for carbonization. The carbonization step was performed under N2 atmosphere with a flow rate of 200 cc/min.
Characterization of the As-spun and Carbonized Fibers.The surface morphology of the as-spun and heat-treated fibers was observed by field emission scanning electron microscopy (FE-SEM, JSM-6340F, JEOL, Japan). The as-spun and stabilized fibers were sputter-coated with Pt for 3 min prior to observation to enhance conductivity to the samples. The carbonized fibers were observed without any post-treatments.
The inner-pore and its morphology of the carbonized fibers were observed by transmission electron microscope (TEM, JEM-2100F, JEOL, Japan). The carbonized fibers were dispersed in ethanol by sonication for 5 min. The droplets of the fiber-containing solution were dropped on the grid and dried in a conventional oven for a day at 60 °C.
The nitrogen gas adsorption-desorption isotherms of the carbon nanofibers were measured using an automatic gas adsorption apparatus (ASAP 2000, Micromeritics, USA). Brunauer-Emmett-Teller (BET) specific surface areas were calculated from the adsorption isotherms.

Miscibility of the Blend Solutions.In order to impart the high porosity and eventually control the pore structure of the final PAN-based carbon fibers, two blend polymers having different miscibility with PAN, PVDF and SAN, were chosen as the sacrificial component during carbonization. Figure 1 shows the blend morphology of PAN/PVDF and PAN/SAN solutions at the blend ratios of 90:10 and 80:20, respectively. Both PVDF and SAN produce the domain structure in PAN/DMF solutions, indicating poor miscibility. The domain size of the sacrificial component determines the pore structure and resultant porosity of the PAN-based carbon nanofibers. The average diameter and standard deviation of the sacrificial polymer domains are optically measured and summarized in Table 1. At the blend ratio of 80:20, PAN/PVDF and PAN/SAN solutions give the diameter of 13.5±3.1 and 14.15±4.1 μm, respectively. Although the incorporation of the poorly miscible polymers is an effective way to afford the porosity in the resultant fiber, they are able to degrade the phase stability and related solution spinnability in the electrospinning process. Fortunately, the blend solutions exhibit similar phase morphology even after 4 h and the domain sizes of the sacrificial polymers remain almost constant. That is, it can be conjectured that the sacrificial polymers, PVDF and SAN, are limitedly miscible or compatible with PAN.
The miscibility of the polymeric components was theoretically evaluated using the solubility parameter. The overall and individual solubility parameters (Hansen solubility parameter) of each material are listed in Table 2. The solubility parameters for PAN and PVDF were calculated based on the Van Krevelen group contribution method,20 while that of the copolymer, SAN, was calculated according to the equation suggested by B. Schneier.21 As a rule, the closer solubility parameter values of two components indicate their stronger chemical affinity.22 Comparing the two sacrificial polymers, PVDF gives a lower value difference in the overall solubility parameter with PAN (4.2) than SAN (6.2), suggesting the better affinity of PAN-PVDF. Meanwhile, the previous study reported that the chemical affinity of highly polar PAN is dominantly governed by the polar term (δp) instead of the overall δ. The higher chemical affinity of PAN-PVDF than PAN-SAN can be further proven in the δp. The δp difference of PAN-PVDF (2.0) is much lower than that of PAN-SAN (8.0). In other words, PAN and PVDF are partially miscible due to the dipole-dipole interaction.
The interaction parameter calculated from the solubility parameters offers quantitative information on the miscibility of polymer-polymer system.23,24 The equation for interaction parameter is expressed as 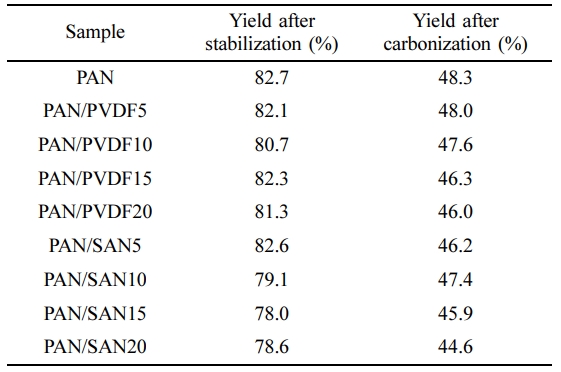 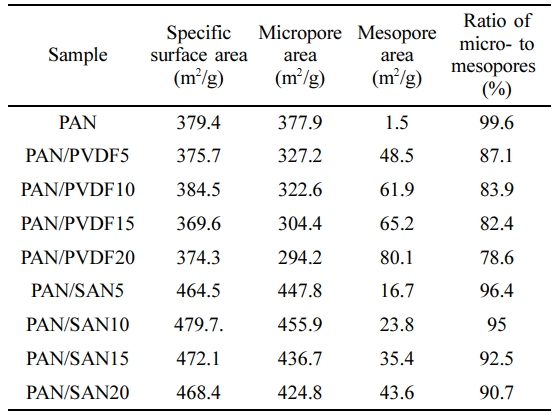 The pore structure of PAN-based carbon nanofibers blended with PVDF and SAN, respectively, was analyzed in terms of miscibility between polymers in the blend solutions. The miscibility of PAN matrix and the sacrificial polymer was investigated by several theoretical and experimental methods. The results showed that PVDF was partially miscible with PAN while SAN was almost immiscible. PAN/PVDF blended carbon nanofibers had elongated pore structures while oval-shaped pores were dominant in PAN/SAN blended carbon nanofibers. It was because the partially miscible PVDF domains were also stretched during the fiber formation process of the PAN matrix.