Biocomposite films made up of polyvinyl alcohol (PVA) and eggshell powder (ESP) were prepared by solution casting method. The physical propertiess, mechanical properties and biodegradability of biocomposites were studied based on various ESP loading (0 to 40 wt%). From raw material characterization, ESP was found to have similar composition to the calcium carbonate, which is widely used as filler in polymer composites. It was found that the tensile properties decreased with increasing ESP loading, attributed from poor interfacial adhesion and ESP agglomeration as proven by field emission scanning electron microscope (FE-SEM) micrographs. Water absorption and water vapour transmission were enhanced with addition of ESP. The biocomposite shows higher biodegradability in both soil burial and natural weathering with increasing ESP loading

A biocomposite films based from polyvinyl alcohol and eggshell powder was fabricated via solution casting method. Composition of eggshell powder is almost similar to commercial calcium carbonate. Biodegradability of biocomposite was enhanced with increasing filler content. 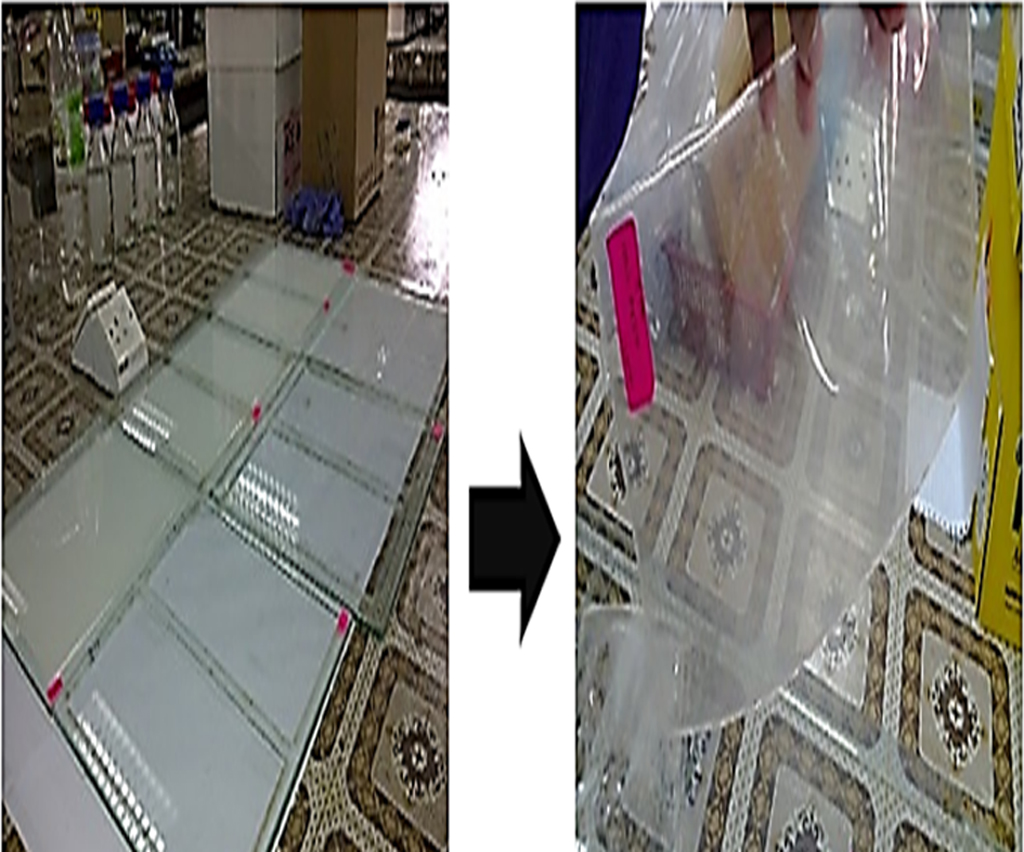 Authors would like to acknowledge the support from Universiti Sains Malaysia by permitting the utilization of analytical facilities available.

Over the year, polymer usage is growing wider in almost every sector due to the comparable properties, variability, and lightweight of polymer. However, commodity polymers such as polyethylene and polycarbonate persist for a long time after disposal, causing accumulation of solid waste of these materials. The inertness and long life time span of synthetic, petroleum based polymers are gaining environmental concern. Therefore, studies on biodegradable polymeric materials have been one of the interesting topics among researches and industries. Biodegradable polymers are classified into two major groups, according to the origin, which is from natural resources and from petroleum based. Even though the polymers are derived from crude oil, the chemical structure of the polymer affects biodegradability. For example, ester bonds in polycaprolactone and hydroxyl groups in polyvinyl alcohol is sensitive to hydrolysis, making them biodegradable.1,2
Polyvinyl alcohol (PVA) is one of the petrochemical thermoplastic, that is biodegradable due to the hydrophilic characteristic.3,4 PVA is commercially produced via hydrolysis of polyvinyl acetate (PVAc) and mostly used in textile, coatings, packaging, and printing industries.5 PVA offers several advantages such as good flexibility, excellent mechanical properties, transparency, nontoxicty and biocompatibility.6-8 Researches have been conducted to produce biocomposite utilizing biodegradable polymer as the matrix. This is due to the cost of biodegradable polymers are slightly higher compare to commodity plastics and usually the properties need to be tailored to meet the customers’ need. Several types of filler can be used in biocomposite such as natural fiber from plants, animals, and mineral filler.
Growing demands in global poultry have significant impact on the environment as the pollution and production of by-products are also increasing.9 One of the products in poultry is eggshell, which has been reported to be produced almost 72 million tons currently.10 The potential use of waste eggshell as bio-filler in polymer composite is widely studied by researchers.11-14 The shell contributes to 11% of the total weight, thus eggshell waste is nearly 7.92 million tons.15 Eggshell is composed of almost 95 wt% mineral phase of calcium carbonate and 5 wt% organic materials.16,17 Therefore, eggshell has high potential to be used as filler on polymer composite as another alternative to commercial calcium carbonate.
Hassan and co-workers studied the value-added biopolymer nanocomposites from waste eggshell-based calcium carbonate nanocomposite as filler, and it was found that addition of 2 wt% filler enhanced the flexural strength and thermal stability.18 Besides that, Sutapurn et al. utilized calcined eggshell powder (ESP) as filler in high density polyethylene. The mechanical properties such as ultimate stress and young modulus increased, but yield strength and thermal resistance were not improved. In order to further improve the properties, maleic anhydride was grafted on HDPE.19 Murugan et al. investigated the effect of filler loading on structure and properties of PVAc/chicken ESP composites. The decomposition temperature increased with addition of filler. However, tensile strength and elongation at break decreased.20
This work aims to produce a new biocomposite made up from ESP and PVA. The ESP will act as a natural filler in the polymer composite, which will affect its properties and also contribute to cost reduction. The effect of ESP loading is studied based on the mechanical properties, physical properties, and biodegradability of the biocomposite.

Materials. Polyvinyl alcohol (PVA) with average molecular weight of 7200 g/mol was purchased from Sigma- Aldrich (M) Sdn. Bhd (Kuala Lumpur, Malaysia). Eggshell was collected at Kafe Staf, Universiti Sains Malaysia (Penang, Malaysia), followed by cleaning and drying process. Merck (M) Sdn. Bhd (Selangor, Malaysia) supplied glycerol and Tween80, which act as plasticizer and non-ionic surfactant. Hexamethylenetetramine (HMTA) is a hardening reagent with average molecular weight of 140.19 g/mol was spplied by Sigma-Aldrich (M) Sfn. Bhd. De-ionized water is used as solvent. All of the chemicals were analytical grade reagents.
Preparation of Biocomposite. Prior to biocomposite preparation, eggshell powder (ESP) was obtained via grinding using mini crusher from Chyun Tseh Industrial Co. Ltd (Taiwan), followed by sieving. After that, ESP was dried for 24 h at 70 oC and was kept in dessicator until further use. PVA/ESP biocomposite was prepared by solution casting method accordingly to formulation in Table 1. 200 mL deionized water was used to dissolved PVA and stirred for 10 min at 95 oC. ESP was added, followed by another 10 min of stirring. The additives were added and stirring continued for another 10 min to ensure homogenous mixture. The solution was casted over glass plates and were dried for 24 h at room temperature. The biocomposite was further dried at 70 oC for 2 h in oven. Biocomposite film with thickness of 0.15 mm was peeled off and kept for futher testing.
Characterization of Biocomposite. Morphological Study: Field emission scanning electron microscopy (FE-SEM) was used to study the morphology of ESP and surface morphology of biocomposite. Prior to observation, the samples was mounted on aluminium stub with carbon tape, followed by thin gold sputtering to prevent charging and poor resolution.
Fourier-transform Infrared Spectroscopy (FTIR) Analysis: The functional groups present in ESP and PVA/ESP biocomposites were analyzed using Fourier transform infrared spectroscopy (FTIR). The scanning was carried out 16 times of range from 400 to 4000 cm-1. The chemical structure was determined by the means of peaks in FTIR spectrum.
Density and Void Measurement: The density measurement of each biocomposite composition was carried out using Precisa Gravimetrix Type 220A, Series 320 XB (Dietikon, Switzerland). The theoretical density was calculated using eq. (1). By comparing the actual density and theroretical density, the void content was calculated using eq. (2) according to ASTM D2734.

where wt% is the weight percentage, ρT is the theoretical density, ρE is the experimental density.
Tensile Properties: The biocomposite film was cut into dumbell-shaped (ASTM D638) and the average thickness of film was measured. Tensile properties were evaluated by Instron 3366 testing machine at crosshead speed of 50 mm/min and 10 kN load cell at room temperature. The gauge length was set at 50 mm. The test was repeated for five samples for each composition. The avearge value of tensile strength, elongation at break and tensile modulus were calculated respectively.
Water Absorption: Water absorption test was performed accordingly to ASTM D570. After recording the initial weight, the biocomposite films were immersed in distilled water at room temperature for 24 h. The water on the film surface was wiped and the weight was measured. Water absorption percentage of biocomposite film was calculated as:

where Wf is the final weight and Wi is the initial weight.

Water Vapour Transmisibillity (WVT) Test: WVT was mesured according to ASTM E96-80 (ASTM 1998), modified by Gontard et al.21 30 mL distilled water was filled in a container, followed by sealing the container with biocomposite film. The changes in weight of the set up was measured and recorded daily until constant weight was achieved. Five containers were prepared for each biocomposite composition. The WVT was calculated by:

where G is the changes in weight, t of time and A is the area of the cointainer sealed by biocomposite film.
Biodegradability Test via Soil Burial and Natural Weathering: Biodegradability of PVA/ESP biocomposite was determined via weight loss percentage after 14 days of soil burial and weathering (ASTM D1425) respectively. The samples were cut into dumbell shape Type IV according to ASTM D882 and the initial weight was recorded. The tests were carried out at School of Material and Mineral Resources Engineering, Universiti Sains Malaysia, Nibong Tebal, Penang.