Melt-mixed composites of poly(butylene adipate-co-terephthalate) (PBAT) with the waste gypsum and calcium carbonate were prepared and their properties were compared. Calcium carbonate and gypsum contain the same cation (Ca2+) but different anions i.e., smaller CO32- and larger SO42- respectively. According to the Fajans’ rule, CaCO3 is more ionic whereas gypsum is more polarizable. Because of the abundant polarizability, gypsum was well dispersed in the PBAT matrix through the filler-matrix electrostatic interaction. The gypsum/PBAT showed lower tensile strength but higher elongation at break at a filler to matrix ratio of 20: 80 than those of CaCO3/PBAT. Further, the addition of polylactic acid (PLA) enhanced both the tensile strength and elongation at break of the gypsum/PLA/PBAT while no such effective changes were observed for CaCO3/PLA/PBAT maybe due to the possibility of depolymerization of polymers in the presence CaCO3. Thermal, morphological, and crystallography studies well corroborate with the mechanical behavior of the composites.

Melt-mixed composite of PBAT with waste gypsum was found to exhibit better mechanical performance than that of the calcium carbonate (CaCO3), which may be due to the abundant polarizability of gypsum and its better dispersion within the PBAT matrix. Further, addition of PLA enhanced both the tensile strength and elongation at break of gypsum/PLA/PBAT while no such effective changes were observed for CaCO3/PLA/PBAT. 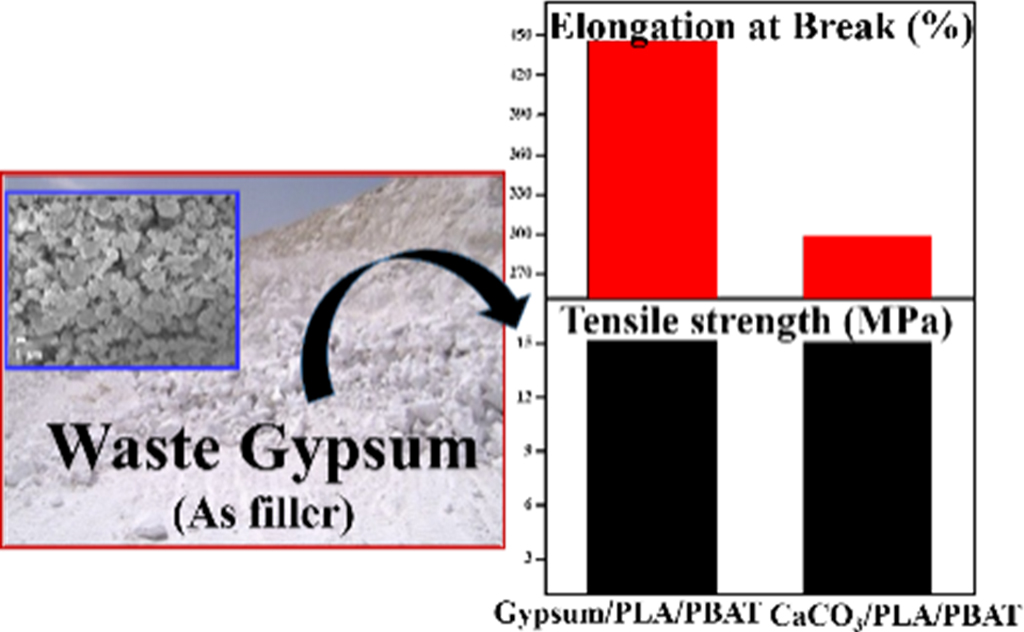 This work is results of a study on the Economic Cooperation and Development Project (P0002141), supported by the Ministry of Trade, Industry and Energy and the BK21 Plus Program (Future-oriented innovative brain raising type, 21A20151713274) funded by the Ministry of Education (MOE, Korea) and National Research Foundation of Korea (NRF).

Fast-spaced population growth significantly increases the use of petro-polymer derived plastic products in our society. But in consideration with the current environmental concerns e.g. environmental pollution, greenhouse gas emissions, and the depletion of fossil resources, different bio-polymers (e.g., starch, polylactic acid (PLA), polyhydroxyalkanoates, poly (butylene adipate-co-terephthalate) (PBAT), and poly(butylene succinate), etc.) are being considered as promising alternatives to the traditional petro-polymers.1-5 In this regard, attempts have been taken to develop different bio-degradable and bio-compatible polymers based disposal products such as bags, toys, cables, automotive parts, textile products (tees), packaging for food, medicine, cosmetic, hygiene products (nappies), foils for agriculture and cutlery, and etc. Among the numerous kinds of bio-polymers, PLA, a thermoplastic aliphatic polyester obtained from renewable resources e.g. corn starch and sugarcane, is currently considering as the most promising and popular material for developing ‘green’ eco-friendly material.4-10 However, the maximum of the bio-polymers is cost-intensive and mechanically poor.1,11 Particularly, the PLA has associated with different demerits e.g. brittleness, low heat distortion temperature, poor processability, etc., although possessing high modulus and strength comparable to that of many petro-polymers.4,7,8,12-14 Generally, plasticizers are required to improve the property of PLA,12,13 but there are some limitations regarding the processing of PLA with plasticizer (especially during melt mixing), and the safety of the food products when the PLA is used for packaging purpose. Instead of plasticizers, attempts are being taken to blend the PLA with other bio-polymers to improve its mechanical property. In this regard, immense attention has been paid to PBAT for blending with PLA.13-17 Basically, the PBAT is a commercially available aliphatic-aromatic co-polyester and exhibits high flexibility and toughness but low modulus. One more important property of PBAT is that it can fully degrade within a few weeks in the presence of an enzyme.17 Compared to the other polymers, PLA is still an expensive polymer.11,18 So, otherwise blending the PBAT with PLA matrix, it is supposed to be better to blend PLA with PBAT matrix to meet a bio-degradable PLA/PBAT composite of improved mechanical properties. Although both the PLA and PBAT are polyester in nature, they are incompatible. As a consequence, various attempts have been taken to make the blend using different compatibilizers.11-16 Other approaches improving the compatibility of the two components have been reported: Ultrasound irradiation, cross-linkers (e.g., dicummyl peroxide (DCP)), etc. However there is always a chance of chain scission (or depolymerization) which may reduce the intrinsic properties of the polymers.15 In spite of all these aforementioned pros and cons, the production cost of these polymers limits their large scale industrial upscaling for different applications e.g. in the area of agriculture and cutlery, where the bio-degradability of the polymer products are typically advantageous.4 Although the petro-polymers based agricultural plastics (e.g., low-density polyethylene (LDPE)) used for greenhouses, mulching, and silage become a popular and economically beneficial technique, longer lifetime of these waste plastics causes pollution in the environment and damages the soil quality. Also, their yearly removal and disposal cause the whole agricultural process more cost-intensive. In this regard, the production of low-cost bio-degradable polymer composite is being attempted through low-cost reinforcements by different fillers e.g. natural fibers, common minerals, etc.4,18 For mineral reinforced polymer composite based agricultural plastic, one additional achievement may be the enrichment of minerals in the soil after bio-degradation. Among different reinforcing minerals, calcium carbonate (CaCO3) became popular because of its low-cost and abundant availability.4 Because of its ionic characteristic, CaCO3 is expected to well mix with both the PLA and PBAT through polar-polar interaction and act as a compatibilizer between the incompatible PLA and PBAT. But, its catalytic efficacy during melt mixing of the polymers results in depolymerization, causing deterioration of the polymer’s intrinsic property.4 Another expected disadvantage is that during biodegradation, the pH of the soil can be altered due to presence of the CaCO3.19,20 In contrast to CaCO3, another mineral with the same cation (i.e., Ca2+) is gypsum (CaSO4). The gypsum is produced in a huge amount as a by-product from the phosphoric acid production industry.21 Being a waste material, it may cause serious ecological problems, and its conservation can be very much unpleasant to the society. Therefore, it is necessary to use this waste material for developing some value-added products. In contrast to CaCO3, its anion size is bigger. According to Fajans’ rule, thus it will be less ionic and more polarizable.22,23 Also, it has no such catalytic efficacy on the depolymerization process, so that the intrinsic property of the polymers seems to be unaltered. Another additional advantage is that the gypsum may upgrade the soil quality.24 Considering these advantages, herein we have investigated the effect of gypsum on formulating the composites of PBAT with or without the PLA towards the production of low-cost biodegradable polymer products with improved mechanical properties, which shows promising for the industrial upgrading of gypsum-based polymer composites.

Materials. The polybutylene adipate terephthalate (PBAT) (Solpol 1000) was purchased from GIOSOL Ltd. (Korea). The polylactic acid (PLA; 2003D) was purchased from Nature Works LLC. (Korea). The by-product gypsum was first treated with inorganic acid, adjusted the neutral pH by washing with water and dried to remove the impurities and water content, and then supplied by Namhae Chemical Co.Ltd. (Korea). The CaCO3 was purchased from Omya Co.Ltd. (Korea). Gypsum was found to be regular in shape and size, whereas CaCO3 was irregular in shape and size, as observed by the field emission scanning electron microscopy (shown in Figure 1).
Preparation of the Composites. At first, the dried polymers were premixed with the dried CaCO3 and gypsum powder of various quantity (20, 30, and 40 wt% of total quantity) by tumbling. Then, the mixtures were compounded by a co-rotating twin screw extruder (BA-19, BauTek). The screw rotation velocity was 80 rpm, and the temperature of zones from hopper to die were 130, 140, 150, 160, 170, 180, 190, and 190°C during preparation of the composites made of only PBAT and the PLA mixed PBAT. The extruded blends were cooled in water bath and pelletized. The pelletized blends were then injection-molded by an injection-molding machine (WL-HV-80, Wonil Hydraulic). The injecting temperature of zones from hopper to nozzle were 130, 140, 150, and 150°C, and 160, 165, 170, and 170°C for the PBAT and PLA/PBAT composites, respectively. The filler contents were kept constant i.e., 20 wt% for PLA/PBAT composite whereas the PLA content was varied as 5, 7.5, and 10wt% of the total quantity.
Characterizations. The universal tensile tester (Tensometer 2000, Myung Ji tech, Korea) was used to investigate the mechanical properties of the composites. The tensile strength and elongation at break were measured according to the ASTM D638 standard. All tests were carried out under crosshead speed of 50mm/min.
The thermal properties of composites were measured by using thermogravimetric analysis (TGA) and diffential scanning calorimetry (DSC). For TGA, the samples were heated to 600℃ with a heating rate of 20℃/min in nitrogen atmosphere. For DSC, the samples were heated to 200℃ with a heating rate of 10℃/min and held for 5 min to remove the thermal history. Then, the samples were cooled down with a cooling rate of 10℃/min to 30℃ and finally heated with a heating rate of 10℃ to 200℃. The degree of crystallinity of composites was calculated as follows (eq. (1)).

For each component in the composites, Xc is the degree of crystallinity of PBAT or PLA, respectively. The heat of fusion of 100% crystalline PBAT (ΔH0m)s 114, respectively. The heat required for melting the crystalline phase of polymers (ΔHm) was measured by DSC.
The field emission scanning electron microscopy (FE-SEM) (JSM-7610F, JEOL, Japan) was used to investigate the morphologies of the fillers and the composites. Further, to realize the dispersibility of the fillers in polymer matrix, X-ray micro-computed tomography (Skyscan 2214, Bruker Co., USA) was used. The X-ray source was applied at a voltage of 100 kV and a current of 60μA under normal pressure for an exposure time of 700 ms. The X-ray projections were recorded with the rotation increment of 0.15° within 360°.

Herein, we have investigated the usability of waste gypsum towards the production of low-cost biodegradable polymer composites to be used for developing different agricultural (e.g., mulching, green hose, etc.) or commodity products. Because of regular morphology and abundant polarizability, gypsum well intercalates in the flexible PBAT matrix through the filler-matrix electrostatic interaction. The addition of PLA, because of its better thermal and mechanical properties, enhances the mechanical performance and thermal stability of the composite. Compared to the composites of CaCO3, the gypsum composite exhibited superior mechanical properties, which can be considered potential for the industrial upscaling to develop different bio-degradable products in the future. In addition, this work may open a new strategy to formulate the polymer composites using different inorganic fillers and to manipulate their property depending on the polarizability (chemical formula) of the filler materials.