The foaming process of composites can be strongly influenced by the size, shape, and type of the applied reinforcing materials. In this paper, the structure of foamed polyvinyl chlorides (PVCs) filled with natural additives and 4,4'-diphenylmethane diisocyanate (MDI) were examined by a newly applied ultrasonic technique. The modulus of the composite can be calculated by the longitudinal wave propagation time using this ultrasonic technique. Since the longitudinal waves of ultrasound are strongly influenced by the orientation of the reinforcing materials, the orientation of the composites can be also investigated. Dynamic mechanical analysis (DMA) and bending tests were used to check the changes in modulus, which is comparable to the calculated ultrasonic modulus. Due to the differences in the measurement processes, the ultrasonic and the bending measurements gave opposite results. These opposite results clearly indicate the orientation of the natural filler.

Mechanical measurements of different types, - ultrasonic timer, dynamic mechanical analysis, bending test - were used to examine PVC-wood foamed composites. By comparing the results of the different methods, the orientation and effect of wood flour filler and 4'4-difhenylmethane diisocyanate (MDI) compatibilizer could be determined. In the case of all the foamed composites, surprisingly, a lower machine direction modulus was measured compared to the cross direction. 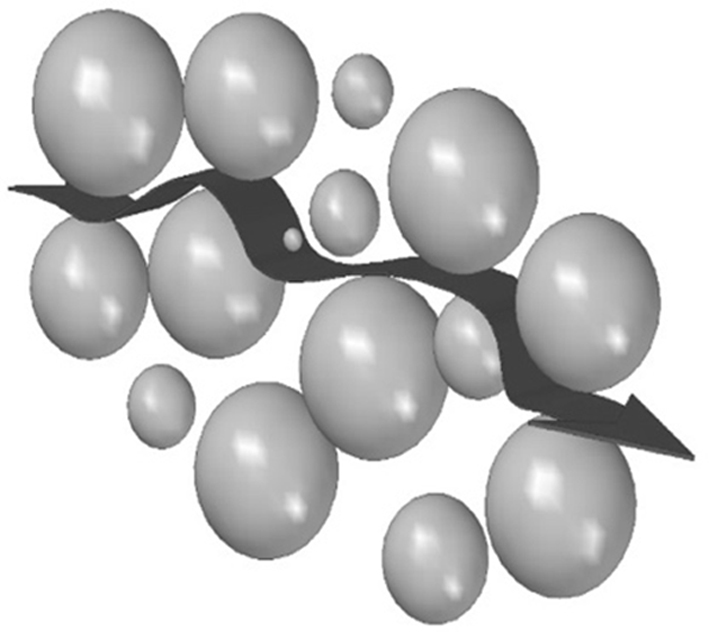 This research was supported by the European Union ant the Hungarian State, co-financed by the European Regional Development Fund in the framework of the GINOP – 2.3.4.-15-2016-00004 project, aimed to promote the cooperation between the higher education and the industry.

Due to their unique properties and structures, polymeric foams are often used as insulators and household products.1 In connection with industrial applications, plastic foams with fibrous or any reinforcing materials, are of great interest. Natural fibers such as sisal, pineapple leaf fibers, wood fiber, etc. show promising property enhancing effects in polymers, such as reduction in weight and improved dimensional stability. The combination of a polymer matrix and a dispersed (reinforcing) phase results in outstanding performance in relation to the mechanical and thermal properties of the composites. The properties of the final composite structure can be determined by the morphology and homogeneity of the matrix and the relative amount, geometry, and orientation of the dispersed phase. Polymers with natural and renewable sourced fillers are more environment friendly, are bio-degradable, and lower in cost than the neat polymer itself.2 The disadvantage of fibers is that they can cause inconvenient properties in strength, and can make processing more difficult. Sometimes tooling and maintenance costs increase due to the abrasive nature of the natural filler that was used.3,4
The frequent problem of composites is that the fibers do not effectively bond with the matrix due to poor adhesion at the fiber-matrix interface. Natural fibers are usually incompatible with the hydrophobic polymer matrix and tend to form aggregates. The efficiency of dispersity increases with surface treatment or pre-treatment before processing.5-7 Treatment with 4'4-diphenylmethane diisocyanate (MDI) results in better adhesion between the PVC matrix and the fibers. Due to the chemical reaction of isocyanates N=C=O with the natural filler’s -OH groups, adhesion can be increased. Fiber-based polymer composites treated with isocyanates have good mechanical properties, thermal conductivities, and melt flows.8,9
In the last two decades, ultrasonic waves have been used to study the structure of materials. The characteristics of the production process, structure morphology, measurement of the density and viscosity of solid and molten polymers can all be achieved by ultrasonic measurements. The conditions of processing foamed plastics and the cell formation mechanism during the foaming were also investigated. Two main types of ultrasound waves, longitudinal and transverse, can be differentiated and can be used to test the above mentioned properties. While the motion of longitudinal waves is parallel with the direction of the main motion, the motion of shear waves is perpendicular.10,11
The possibility to use ultrasonic analysis has already been studied in many areas.12 The ultrasonic method can be used in real time, online, and is a non-destructive measurement. Ultrasonic characterization of materials is often achieved by measuring the damping coefficient and propagation velocity.13 Xia and co-workers14 studied the suitability of ultrasonic technology for interpreting the process of polymer processing. Michaeli and Stark15 used this method for online monitoring during microinjection. Zhao et al.16 developed ultrasonic methods for measuring the structure of crystalline fractions of polymers. Zhao et al.17 were also able to examine the cell size, surface roughness and thickness of skin layer during the microcellular injection molding (MIM) technology process via ultrasonic technique. Ultrasonic waves are often used for polymer surface treatment. Ghose and Isayev18 studied the ultrasonic surface treatments of polyurethane with rubber powder. The properties of porous materials have also been described using acoustic wave propagation.19 Ultrasonic reflectance can be recommended for porosity measurements. Determining the porosity parameter is important in the propagation of frequencies, especially of the acoustic properties of porous materials.20 Based on published results of other researchers, the aim of this study is to quantitively characterize the orientation of natural filler and modulus of foamed PVC – wood composites. The effect of the ratio of the wood flour and MDI were evaluated by the results of the density, ultrasounic waves propagation, elastic modulus and bending tests. The cell morphology affects the ultrasound waves propagation in the PVC matrix, which wood flour can further modify. The effect of a surface treatment was also investigated.

Materials and Method. The polymer matrix was polyvinyl chloride (PVC, K-value=58) provided by BorsodChem Zrt. In Table 1 all of the components and material types of the composites are summarized.
The natural filler used was beech wood flour having an average particle size of 200 to 300 µm. The L/D ratio of filler was 1.4. The wood flour was obtained at a local trader. To increase the adhesion between PVC and the natural filler, the natural filler was treated with 4,4'-diphenylmethane diisocyanate (MDI). The MDI was also provided by BorsodChem Zrt. The used quantities were 1, 2, 5phr (compared to the 20phr amount of the natural filler) respectively. The density of the MDI is 1.21 g/cm3. The foaming agent was a catalyzed azodicarbonamide, with a blowing temperature of 140oC.
Sample Preparation and Production Conditions. In the first step the base PVC mixture was prepared, after this the wood flour and the surface treated wood flour filler was mixed in the matrix according to Table 2. The surface treatment of the natural additive was done by spraying it with MDI during continuous mixing. The mixtures were homogenized in a high-speed mixer – MTI20FU type 20l. Mixing was carried out to a temperature of 110°C and the cooling temperature was 40°C. The dry powder mixtures were processed on a Göttfert Extrusiometer 30 equipment. The extruder’s temperature variation from feeder to tool was between 175-190°C. The extruder’s tool was a wide slot tool with dimensions of 100×3mm. Pressed, compact samples were also prepared for analysis. Five different composites were made. The composition of each is shown in Table 2.
The powder mixture was rolled at 170°C using a Schwabenthan 150UL electrically heated roll mill. The rolled sheets were pressed using a Bürkle LA 160-type press at 175°C. The pressed thicknesses were 1 and 4 mm, respectively, at a pressure of about 100 bar.
Experimental Approach. Based on Archimedes’ principle, density measurements were carried out with an analytical balance. The dry and in water immersed masses were measured to calculate the density. The results of 3 samples per type were averaged.
The ultrasonic characterization was carried out using a Fakopp Ultrasonic timer.21 The test is non-destructive, and it is an important tool for evaluating the structure of wood, veneer, wood panels, and concrete materials. The defect locations or cellular morphology of the wood, in this case of the wood composite, can be determined by the longitudinal ultrasound waves. The method is based on measuring the time of ultrasound wave propagation at a specified distance. Based on Figure 1, two identical piezoelectric transducers are connected to the material during the tests. A short ultrasonic pulse is generated by the electronic excitation of one of transmitters. The sound spreads in the material and reaches the second transmitter, which is used as a converter. The second signal from the receiver stops the timer.
The propagation time is displayed on the device’s screen in microseconds. From the ultrasound’s propagation time between the transmitter and receiver, the propagation speed can be determined by the following eq. (1):22

where: C – propagation speed [m/s], λ – distance between the transmitter and receiver [m] and, t – time [sec].
The modulus of elasticity is calculated from the ultrasound’s speed as follows:22

where: E – modulus of elasticity [Pa], ν – Poisson factor [-], and ρ – density [kg/m3].
According to the literature, the Poisson factor used for the pressed PVC/wood composites was 0.4, while for the foamed samples the Poisson factor was 0.3.23,24
The dynamic mechanical analysis (DMA) technique was used to check the results of the modulus calculated by ultrasonic measurements. The measurements were carried out using a Rheometric Scientific MK-III instrument in dual cantilever deformation mode. The deformation frequency was 1 Hz with less than 0.2% deformation. The heating rate was set to 2°C/min, and the temperature range was 20-100°C.
Bending tests, using an INSTRON 5566 type universal materials tester, were also carried out to verify the modulus. The bending type was three-point bending; the bending speed was 50mm/min; the support width was 80mm. The measured results of the 7 samples per type in machine and cross directions were averaged.

In this article, the moduli of the samples were determined by ultrasonic timer, DMA measurement, and bending tests. The measurements were already based on different measurement procedures, and therefore the orientation of the natural additives and the foam of all the structures could also be examined from the differences and similarities of the results. From the results of the ultrasonic measurements, the orientation of the reinforcing materials in the composites could be determined. In the case of compression molded samples, it was observed that the modulus values of the samples increase (measured by ultrasonic) until 5phr MDI application. MDI improves the connection between the filler and the matrix, which further increased the modulus of the composites (for samples WM1, WM2). In the case of composite MDI 5, the layer of isocyanate is thicker at the surface of the wood particle, which by its lower modulus hinders the transfer of longitudinal waves between the particles and the matrix, artificially lowering the observed modulus. For the foamed samples, the addition of MDI usually lowered the ultrasonic observed modulus in the machine direction. Due to the complicated path taken by the sound waves, the effect of the lower modulus MDI was more pronounced. In the case of all the foamed composites, surprisingly, a lower machine direction modulus was measured compared to the cross direction. This phenomenon is supported by the measurement results of pure beech wood and PVC. From the results of both ultrasonic measurement and the bending test, it can be concluded that the orientation is in the machine direction in the composite. Mechanical testing always showed a higher modulus in the machine direction, and, therefore, this odd behavior can be explained by the way ultrasound propagates and interacts with the material.