The traditional reactive dyeing of cotton has the disadvantage of poor fastness. In order to improve the fastness, a novel environment-friendly cationic waterborne polyurethane (CWPU) was successfully synthesized via step-by-step polymerization. The CWPU was prepared from isophorone diisocyanate (IPDI), polypropylene glycol (PPG-1000), methyl ethyl ketone oxime and hydrophilic monomer (EGDEA). The chemical structure of CWPU was characterized by Fourier transform infrared spectroscopy. Effects of n (IPDI/PPG-1000), EGDEA dosage, and the neutralizational degree on the properties of the waterborne polyurethane emulsion and the fastness of the treated dyed cotton fabrics were investigated. Particle size and zeta potential were tested to evaluate the emulsion stability. Scanning electron microscope showed that CWPU had been successfully finished on the fabric. Compared with the untreated cotton fabric, the dry and wet rubbing fastness of the treated cotton fabric dyed with reactive dyes increase 0~0.5 and 0.5~1 level, respectively, and the wash fastness increases 0.5~1 level.

The hydrophilic monomer (EGDEA) synthesized by the reaction of ethylene glycol diglycidyl ether (EGDE) and diethylamine (DEA) as a cationic chain extender is introduced into the polyurethane primary polymer to synthesize cationic waterborne polyurethane. The dry rubbing fastness, wet rubbing fastness, and soaping fastness of cotton fabrics dyed with reactive dyes can be increased by 0~0.5, 0.5~1, and 0.5~1 after treatment with a fixing agent. 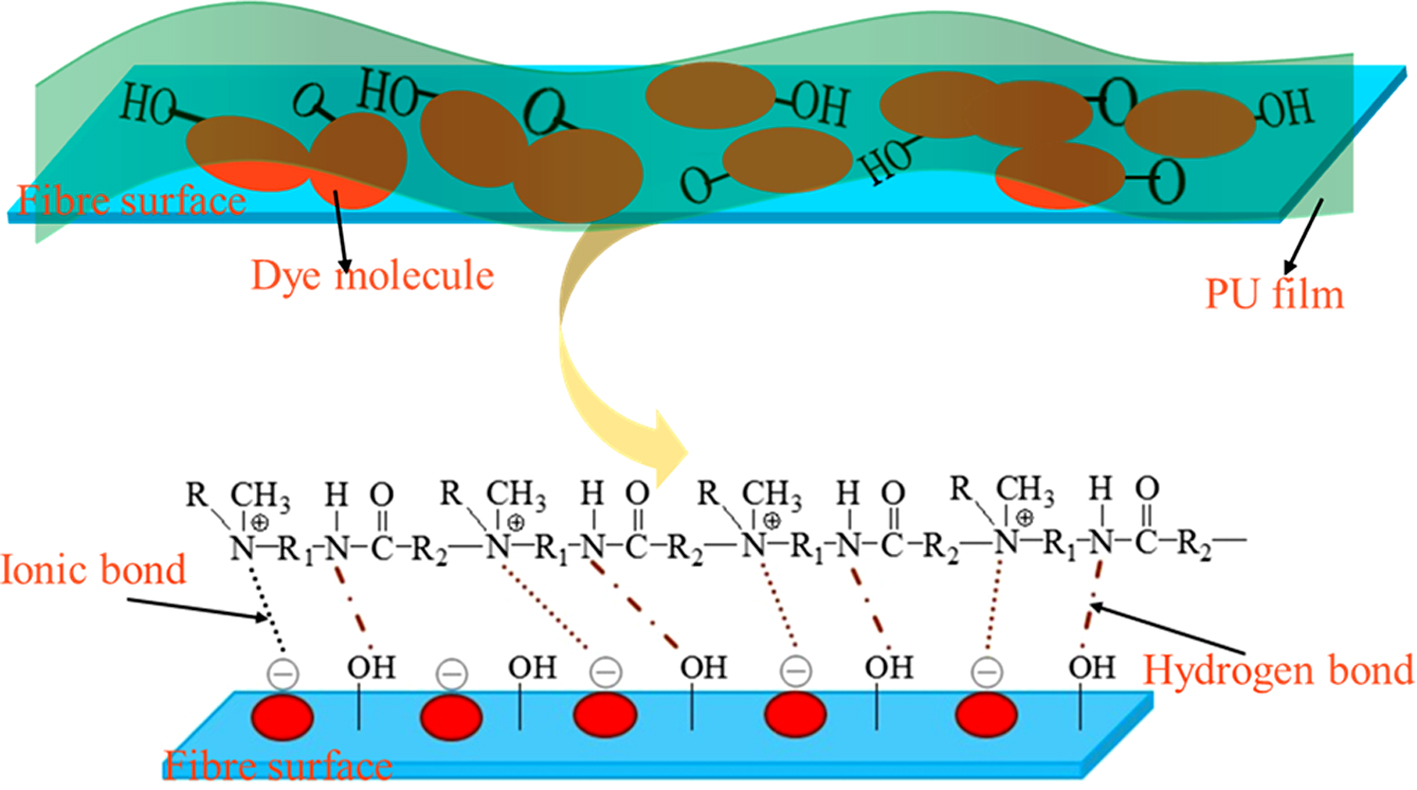 This study was supported by the National Natural Science Foundation of China (NO. 21774085).

Reactive dyes are most preferred dyes for dyeing of cellulosic fibres as they can occur chemically bonded to the fibres which are being dyed,1,2 present bright and brilliant colour in various shade ranges and also inexpensive to apply.3-5 Under alkaline conditions, reactive dyes react with hydroxyl groups of cellulose, mostly by nucleophilic substitution or addition, to form the covalent bonds.6-8 However, the following problems exist with reactive dyed cotton fabrics: 1) Some reactive groups are hydrolyzed and inactivated during the dyeing process, resulting in a low dyeing rate.9,10 2) The chemical stability of the covalent bond formed between the dye and cellulose is poor.11 Under humid and hot conditions, it is easy to break the bond and fade, and the fixation rate is low. According to statistics, about half of the dye is lost with the drainage. The distribution of dye on the fibers is shown in Figure 1. As a result, there are a large number of unfixed dyes on the dyed fabric and the dyeing fastness is unqualified. So, it must be treated with a fixing agent.
Notable improvements in the fastness properties of anionic dyes can be brought about by pretreatment or after treatment of textile fibers.12-14 The use of pretreatments or after treatments to improve the fastness properties of dyeing has a long and prolific history. The traditional fixing agent Y has the problem of formaldehyde release and has been banned.15 Polyamine-based fixing agents have good color fixing effects, but this type of fixing agents contains more free amines in addition to quaternary ammonium salt groups, which can cause discoloration on fabrics.16 Polycationic fixing agents have excellent color fixing effects, but the raw material diallylamine is difficult to purchase due to environmental regulations.17 As a fixing agent, water-based polyurethane has the advantages of good film-forming property and less harm to people and the environment, and has become one of the research hotspots.18-20 However, most researchers use N-methyldiethanolamine, triethanolamine, etc. as hydrophilic monomers.21-23 Such tertiary amine-based diols are primary alcohols. They react violently during the prepolymerization stage, tend to gelled, and require more solvent, resulting in an increase in the VOC content of the emulsion.24,25 At the same time, the hydrophilic group is on the main chain of the polyurethane molecule. It not only has low degree of freedom, but also can easily wrap hydrophilic groups in the particles of polyurethane dispersions, which cannot well combine with anionic static electricity on dyes to form insoluble lakes.26,27
In this study, tertiary amino cationic hydrophilic monomer containing a secondary alcohol was synthesized with ethylene glycol diglycidyl ether and diethylamine. Hydrophilic monomers were introduced into the polyurethane as side chain to form a cationic aqueous polyurethane fixing agent. The synthesis of cationic polyurethane fixing agent was optimized by taking polyurethane emulsion performance and fixing performance as indicators. Then, the fixing agent synthesized by the optimized process was compared with the traditional commercial fixing agent.﻿

Synthesis of Cationic Waterborne Polyurethane Fixing Agent: First, a certain amount of PPG-1000 (vacuum dehydrated), DBTDL as catalyst and acetone as solvent were charged into a 250 mL round-bottom and four-necked ﬂask equipped with a mechanical stirrer, a condenser, a nitrogen inlet and outlet, and a dropping funnel. Second, the stoichiometric amount of IPDI was slowly dropped into the ﬂask and the temperature was raised to 70°C under nitrogen protection, the reaction was kept for 2 h. When the -NCO reached the theoretical value, the temperature was reduced to 45℃, certain amount of EGDEA was added dropwise, and the reaction was kept for about 1.5 h. After that, the calculated MEKO was added into the four-neck ﬂask over a period of 0.5h. Acetic acid was used to neutralize the reaction in the after 0.5 h. Finally, the reaction was emulsified with deionized water under vigorous stirring and the CWPU emulsion was achieved after acetone was distilled under reduced pressure. The synthesis equation of CWPU was shown in Scheme 2. 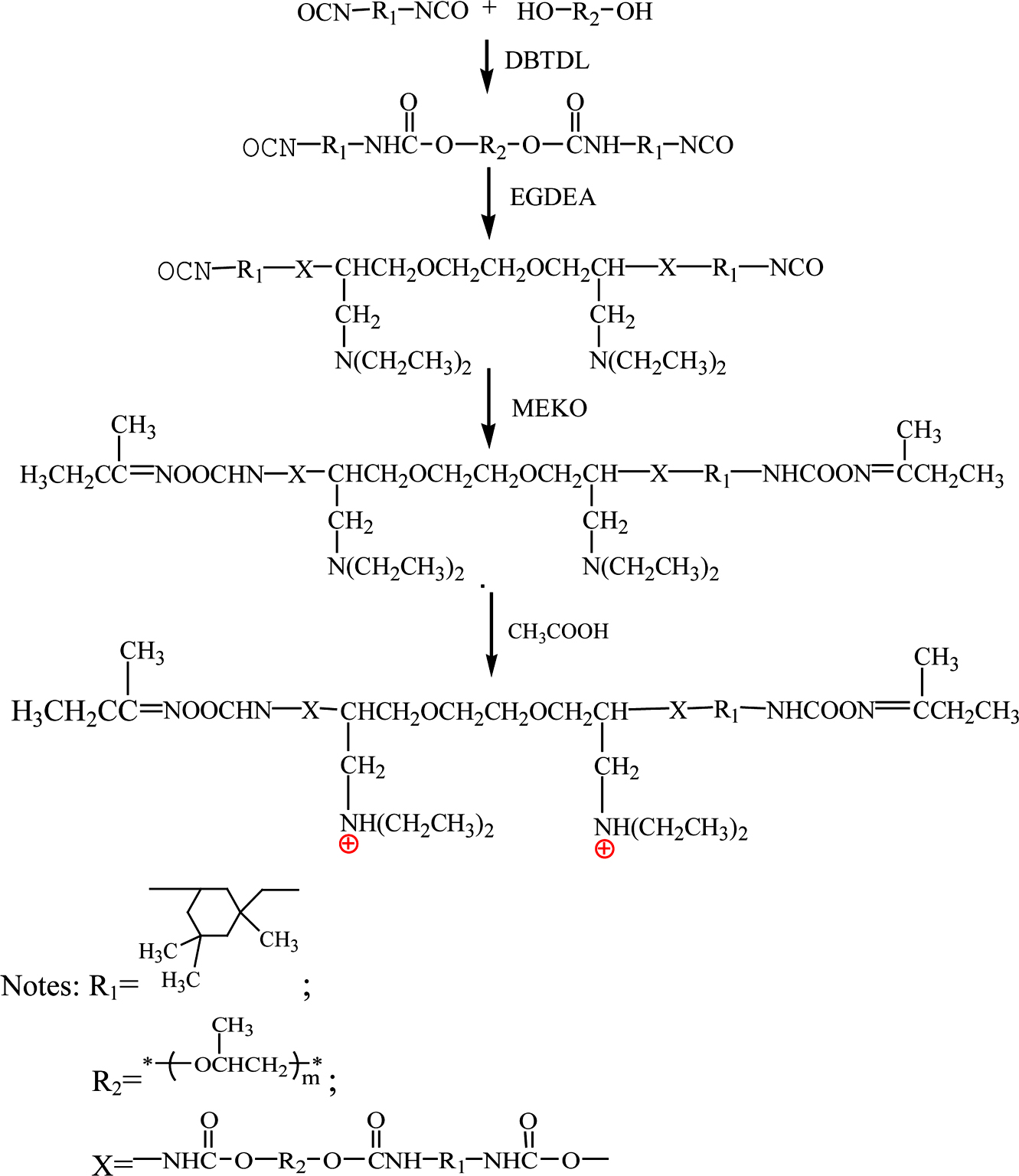 Dyeing of Cotton Fabrics. After the cotton fabric samples had been wetted in cold deionized water. Fabrics were dyed with reactive red 3BS, reactive golden yellow BES, reactive blue SPD in a laboratory dyeing machine at a liquor ratio of 30:1, respectively. The dyeing process formula was shown in Table 1. The process curve was shown in Figure 3.
Dipping Cotton Fabrics in CWPU. Dyed cotton fabric samples were dipped in ﬁnishing solution which contained fixing agents (2% o.w.f), at a liquor ratio of 1: 30 for 60 s. Wet pickup was kept about 75% after two-dips, two-nips. The fabric was dried in a heat-setting stenter at 60℃ for 150 s, and then cured at 120℃ for 180s.
Characterization. The FTIR spectra were used to detect the chemical structures of EGDE, EGDEA and CWPU. Measurements were recorded on a Nicolet 5700 FTIR spectrometer with KBr pellet method. The ATR-FTIR spectra of bleached cotton fabrics, dyed fabrics and fixed-color fabrics samples were performed between 4000 and 500 cm-1 on a Nicolet 8700 FTIR spectrometer. The resolution for all the infrared spectra was 4cm-1 and there were 32 scans for each spectrum.
Scanning electron microscope (SEM) images of the samples that had treated before and after were obtained by TM3030 table scanning electron microscope.
The sample was added in the centrifuge tube and the test condition was 3000 r/min. Centrifuge for 15 min to observe whether the CWPU is stratification or oil drift.
Particle size, particle size distribution and zeta potential of CWPU emulsions were measured by a Malvern Zetasizer Nano ZS90. The samples were prepared by diluting the emulsions with deionized water to adjust the solid content to 0.01wt%.
The water resistance of the film can be expressed by measuring the water absorption.28 The CWPU was formed into a film with a diameter of 50mm and a thickness of about 0.2mm on a glass surface with a known weight by rolling. The sample was air-dried at room temperature, baked for 2 h at 60℃ in an oven, and then dried for 1h at 100℃, until the weight had no change more. The obtained weight minus the weight of the glass piece is W1. The film-carrying glass piece was immersed in distilled water for 24 h, and the surface moisture was taken out by using a filter paper to absorb the moisture. The obtained weight minus the glass piece weight is W2. The water absorption rate was measured by eq. (1)

Cationic chain extender EGDEA was synthesized by ethylene glycol diglycidyl ether and diethylamine. Using the self-emulsifying method, the n (IPDI/PPG-1000) was 2.2, the EGDEA dosage was 7%, and the neutralizational degree was 100%, which can produce an aqueous polyurethane emulsion with excellent performance, good appearance and stability. FTIR indicates the synthesis of the target product, and SEM indicates that the target product is finished on the surface of the fabric. After CWPU treatment on cotton fabrics dyed with reactive dyes, the dry rubbing fastness can be improved by 0 to 0.5, the wet rubbing fastness can be improved by 0.5 to 1, and the soaping fastness can be improved by 0.5 to 1. Compared with two commercial fixing agents, the fixing agent has similar fixing, has less influence on the color of the fabric and environment-friendly.