Poloxamer 407 (PLX) hydrogel has been used as a drug delivery system for intravesical instillation, but it has a limitation of insufficient gel strength. Here, to modulate the viscosity and strength of hydrogel, various polymers were screened. Their effect on viscosity decreased in the following order: high molecular-weight hyaluronic acid (HHA; 33.524 Pa·s) > hydroxypropyl methylcellulose > chitosan > low-molecular weight HA > sodium alginate > carbopol (24.332 Pa·s). Polymer addition hardly altered the thermo-reversible property of hydrogels; the gelation temperature was 21.0–25.3 oC and gelation time was 17.28–28.32 s. With gemcitabine as a water-soluble ingredient, gel erosion and drug release were examined using an in vitro bladder simulation model. After four repeated cycles of filling and emptying, the remaining fraction of HHA-added hydrogel and PLX hydrogel was 74.6% and 57.8%, respectively. Furthermore, drug release was diffusion- and erosion-controlled. Thus, HHA-added hydrogel is a promising system for intravesical instillation. 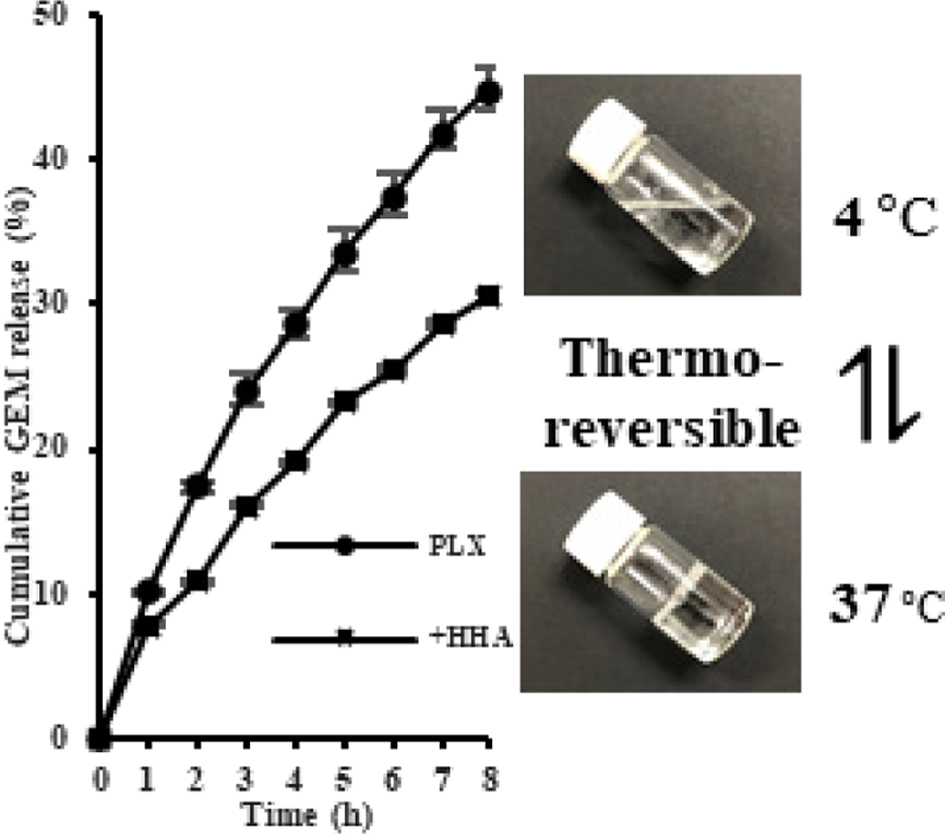 This research was funded by the Ministry of Health and Welfare, Republic of Korea through the Korea Health Industry Development Institute (KHIDI), grant number HI17C0710. This research was also supported by the Chung-Ang University Research Scholarship Grants in 2019.

Bladder cancer, one of the most common cancers worldwide,1 is a heterogeneous disease, and 70% of patients have a superficial tumor with a low risk of death and 30% have a life-threatening muscle-invasive tumor.2 The standard treatments for bladder cancer include radiotherapy, radical cystectomy, immunotherapy, and chemotherapy. Various chemotherapeutic agents such as paclitaxel, doxorubicin, and cisplatin are used as drugs of choice for bladder cancer treatment. Recently, gemcitabine (GEM) has been commonly used in combination or adjuvant chemotherapy for bladder cancer.3 However, these agents generally fail to reach the therapeutic range when injected intravenously. This limitation can be overcome by two strategies, namely, dose increment and intravesical instillation. Because the former leads to systemic adverse effects, the latter is a better option to treat bladder cancer. However, intravesical instillation of a drug into the bladder using a catheter has a limitation of dilution by urine and washout during urination. These challenges can be overcome by employing in-situ gelling systems with sol–gel transition property.
A hydrogel is a hydrophilic polymer network that contains a large amount of water while maintaining its gel form.4,5 It possesses several advantages such as diverse drug-incorporating capacity and in-situ sol–gel transition after instillation in the body cavity. The typical mechanism of sol–gel transition includes temperature- or pH-induced transition.6,7 Thermo-sensitive hydrogels exist in the hard-to-flow phase at the body temperature of 37 oC or free-flowing phase at low temperature (e.g., 4 oC).
Poloxamers, known as ABA-type triblock copolymers, consist of blocks of ethylene oxide (EO) and propylene oxide (PO) units.8 One of the most important characteristics of poloxamer is thermo-sensitiveness. Poloxamers have a unique sol–gel transition temperature, at which they are in a flowable fluid form, termed as sol. As the temperature increases, the poloxamer molecules aggregate to form micelles, owing to the dehydration of the hydrophobic PO blocks. The packing of these micelles, with the poly PO core and poly EO outer shell, contribute to gelation, resulting in an un-flowable fluid, termed as gel.9,10 Because of these characteristics, poloxamer hydrogel has advantages as a delivery system for intravesical instillation; it is also less toxic. Despite these merits, hydrogels composed of only poloxamers do not have sufficient gel strength.
The addition of various excipients can modulate the viscosity and strength of hydrogels.11 Neutral (carbopol, hydroxypropyl methylcellulose, and hyaluronic acid), anionic (alginate, sodium carboxymethylcellulose, and methacrylic acid copolymers), and cationic (chitosan, chitin, and polyethylenimine) biocompatible polymers are commonly used. The interactions between polymeric additives and poloxamers are known to change the gel microstructure and rheological and mechanical properties. These infrastructural and physicochemical changes could affect the gel-forming capacity and the movement of drugs entrapped within the gel structure, thereby changing the gel matrix erosion and drug release characteristics.12-16
In the present study, the strength of hydrogel was modulated by adding selective polymers such as polysaccharide, cellulose derivatives and carbohydrates. Mechanical properties of the modulated hydrogels were evaluated in terms of viscosity, hardness, compressibility, adhesiveness, and cohesiveness. Gel-forming capacity, in terms of gelation temperature and gelation time, was compared among the hydrogels. Moreover, by adopting an in vitro bladder simulation model, gel erosion and GEM release from the hydrogels were investigated. We expect that these characteristics would be favorable to develop a suitable drug delivery system for intravesical instillation in bladder cancer treatment.

where Mt/M∝ is the fraction of drug released at time t; Mt is the amount of the drug released at time t; M∝ is the initial amount of drug in the hydrogel; n is the diffusion exponent; and K0, K1, KH, KHC, and KRP are the rate constants for zero-order, first-order, Higuchi, Hixson–Crowell, and Ritger–Peppas equations, respectively.
Statistical Analysis. All data are expressed as mean ± standard deviation (n ³ 3). Significant differences were determined using the Student’s t-test, and the results with a p-value <0.05 were considered statically significant. 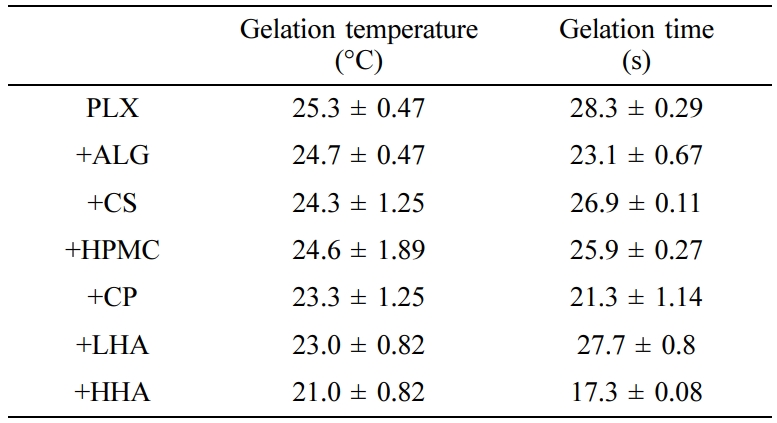 PLX-based hydrogels with or without polymer additives were successfully formulated while maintaining its thermo-reversible property. With excellent gel-forming capacity, the hydrogels revealed acceptable mechanical properties in terms of viscosity, gel strength, and adhesiveness. Drug release was diffusion and erosion controlled. Specifically, HHA-added hydrogel is a promising system for intravesical instillation in the treatment of bladder cancer. However, further in vivo assessments are still needed.