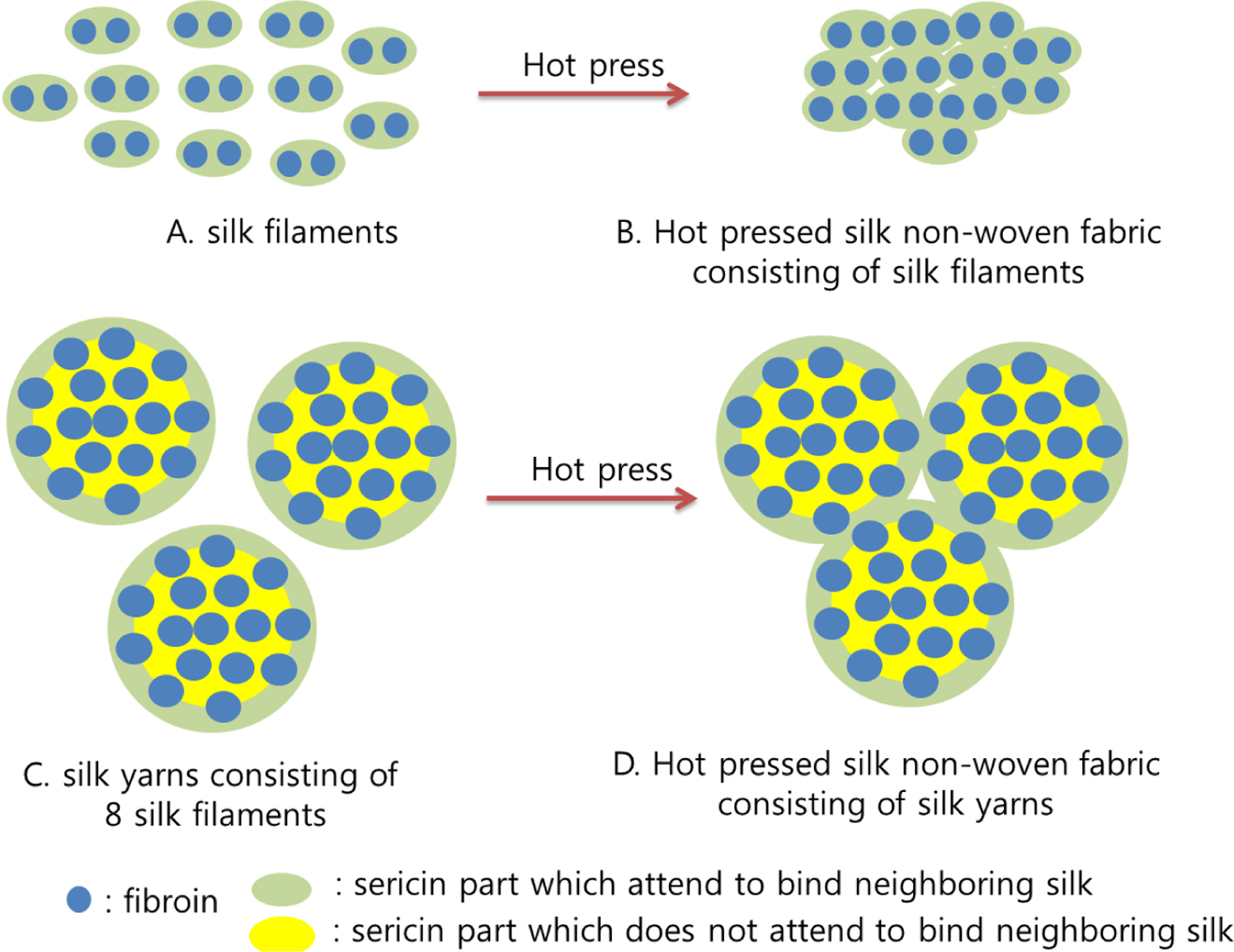 This study was supported by the Basic Science Research Program through the National Research Foundation of Korea (NRF) funded by the Ministry of Education (NRF-2020R1H1A2006573).

Silk is a naturally occurring biocomposite fiber in which sericin covers two fibroin strands. Recently, useful properties of silk, such as its blood compatibility,1 excellent cytocompatibility,2,3 and biodegradation,4-6 were reported. Discovery of these properties has prompted investigation into the applicability of silk in biomedical applications, such as in the fabrication of artificial bone substitute,7,8 wound dressing,9 artificial ear drums,10 membranes for guided bone regeneration,11,12 and nerve conduits.13
For biomedical and cosmetic applications, silk is fabricated in various forms including microsized fibers,14-16 webs,17-20 films,21-23 gel,24-27 sponge,3,26,28,29 nonwoven fabric,30-33 and beads/particles.34,35 Among these, the structure and performance of electrospun silk web have been extensively investigated for the past 20 years17-20 because silk web can be easily manufactured by electrospinning and its porous structure facilitates water-holding and promotes cell adhesion and proliferation.
However, the mass production of electrospun silk web is challenging owing to the low flow rate of electrospinning. Also, too many steps, including degumming, dissolution, dialysis, redissolution, and electrospinning, are required to obtain silk web. More importantly, the high molecular weight and crystallinity of raw silk deteriorate during degumming and dissolution.36-40 Therefore, the high production cost and limited mechanical properties of the electrospun silk web pose as obstacles to its extensive use.
Recently, it has been reported that a porous natural nonwoven silk fabric with good mechanical properties can be fabricated simply by utilizing the binding properties of sericin.31-33 In other words, a natural nonwoven silk fabric can be fabricated by winding (reeling) silk filaments and subsequently wetting and hot-pressing them. It was also reported that the porosity and mechanical properties of natural silk web can be adjusted by controlling process variables, suggesting the possibility of its use in various biomedical and cosmetic applications.
Although the existing method using winding, wetting, and hot-pressing succeeded in the fabrication of natural silk web, our research group has explored various alternative fabrication methods for producing natural nonwoven silk fabric because differently prepared nonwoven fabrics could lead to more diverse applications of silk. For example, the previous natural non-woven silk fabric was fabricated using winding silk filaments. Therefore, the silk filaments in the web was arranged regularly resulting in anisotropic properties. On the other hand, silk can be randomly arranged in the airlaid non-woven silk fabric providing isotropic properties. Thus, in this present study, airlaid non-woven silk fabric will be studied.
Based on previous studies,31-33 it was found to be convenient to first manually prepare nonwoven silk fabric on a small scale and later mechanically fabricate it on a large scale.
Owing to the above-mentioned findings, as a fundamental study, a small batch of the airlaid natural silk web was manually prepared and hot-pressed to fabricate the airlaid nonwoven silk fabric. Effects of the silk yarn length, press temperature, sericin solution addition to the preparation, molecular conformation, and mechanical properties of the nonwoven silk fabric were examined herein.

Preparation of the Airlaid Nonwoven Silk Fabric. Twenty eight denier raw silk yarns were provided by Sanju Myungju, South Korea, for this study. The raw silk yarns were arranged in a straight, disentangled manner and then cut into 0.5, 1, and 2 cm raw silk yarns. To prepare an airlaid silk web, 0.2 g of the short raw silk yarns were randomly dropped into an open cylinder.
The airlaid silk web was wetted and hot-pressed to bind the short silk yarns and manufacture the airlaid nonwoven silk fabric. The silk web was wetted by spraying distilled water or an aqueous sericin solution. Distilled water was sprayed on the airlaid silk web for 5 min to steep the whole silk web to facilitate swelling of the sericin in the raw silk prior to hot-pressing. In the case of wetting with the aqueous sericin solution, different amounts (1-12 mL) of a 2.5% (w/w) aqueous sericin solution were sprayed on the airlaid silk web to improve the binding between silk fibers. The 2.5% (w/w) aqueous sericin solution was obtained by treating silkworm cocoons at 120 oC for 30 min in an autoclave (JSAC-60, JSR, Japan) with a liquor ratio of 1:10.28
The wetted silk web was pressed twice in a flat, smooth-surface hot-presser (HK 2008-1-5, Hankuk Industry Co., South Korea) at 150–250 oC for 10 s to fabricate the nonwoven silk fabric. Nonwoven polyester fabric was placed over and under the silk web to prevent the silk web from sticking to the plate of the hot-presser (Figure 1).
Measurement and Characterization. A photograph of the nonwoven silk fabric was captured with a digital camera (Canon PowerShot A2000 IS, Canon Inc., Japan). Fourier transform infrared (FTIR, Nicolet 380, Thermo Fisher Scientific, USA) spectroscopy was employed in the attenuated total reflection mode to examine the molecular conformation of the airlaid nonwoven silk fabric.41-44
The tensile strength and elongation of the airlaid nonwoven silk fabric were measured using a universal testing machine (UTM) (OTT-03, Oriental TM, South Korea) to evaluate the mechanical properties of the nonwoven silk fabric.32,33 The tensile tests were performed using a 3 kgf load cell at an extension rate of 10 mm/min. The nonwoven silk fabric was cut into 50×5 mm2 pieces and the gauge length was 30 mm. All samples were preconditioned at 20 oC and 65% R.H. for 24 h. Seven samples were tested for each condition and the average and standard deviation of the measurements were obtained.