A network of cross-linking filler particles is theoretically designed by combining ends of grafting chains onto fillers. Molecular simulation study shows that the mechanical and heat generation properties of polymer composites are significantly improved by filling such network into polymer. Simulation study explored a potential way to fabricate strong and low heat generation rubber materials.

The authors acknowledge the support from National Key R&D Program of China (No. 2017YFB 0406204), National Natural Science Foundation of China (No. 51973002) and University Institution of High Performance Rubber Materials of Anhui Province.

We performed classical molecular dynamics simulation methods to study the polymer composites. The polymer chain is represented by a bead spring model developed by Kremer and Grest,17 individual beads are connected by a finite expandable nonlinear elastic (FENE) potential.18 Interaction between nonbonding beads are represented by expended Lennard-Jones potential. To distinguish coarse-grained beads of filler and polymer segment, we set the diameter of polymer and grafted chain beads are s and mass of them to be m respectively, while the diameter and mass of filler beads are 4s and 64m respectively. Due to the dimensionless units setting, m and s are 1 in the simulation. Liu et al. once performed molecular dynamic simulation on polymer composites, and their simulation results are reasonable and accordant to experimental observation. In this study, we set up the parameters which are the same in reference.19 We constructed a three-dimensional polymer network and each lattice of the polymer network is composed of 10 polymer beads. The cross-linking degree of such network is calculated as number of cross-linking beads over number of polymer beads, which is 6.43% for all composites. Filler particles are imposed into the polymer networks. Filling degree represented by n is defined as n=N/M, where N is the total number of filler beads and M is the total number of polymer beads, keep the number of filler beads and polymer beads unchanged to make the filling degree equal in different systems. We considered three kinds of filler particles in the simulation as shown in Scheme 1, those are (a) native particle (nP) without surface modification; (b) surface grafted particle (gP) whose surface is grafted with polymer beads; (c) a network of particles (cP) by cross-linking grafting chain at surfaces of adjacent particles.
NPT ensemble and periodic boundaries were employed in simulation. The simulated temperature is fixed at T*=1.0 and the pressure is fixed at P*=0 through the Nose-Hoover hot bath. The system are fully equilibrated (more than 107 cycles). The model was equilibrated and then stretched at strain ratio of 327% (εmax=3.27) at NVT ensemble to get stress-strain curves of polymer composites. The stress σ is calculated as the same with that in reference.19 To calculate heat generation of polymer composites during cyclic deformation, we imposed cyclically tensile loading processes at strain ratio of 20% (εmax=0.2) for equilibrated composites, which will produce a hysteresis loop of loading and unloading stress-strain curves. The area of hysteresis loop of stress-strain curves is calculated to represent the energy loss during dynamic process, which will be released in the form of heat in the experiment and correspond to the heat generation of polymer composites during dynamic process. More simulation details are consistent with those in reference.19 The simulation process was implemented using a large-scale atom/molecule integrated parallel simulator (LAMMPS) developed by Sandia National Laboratory.20 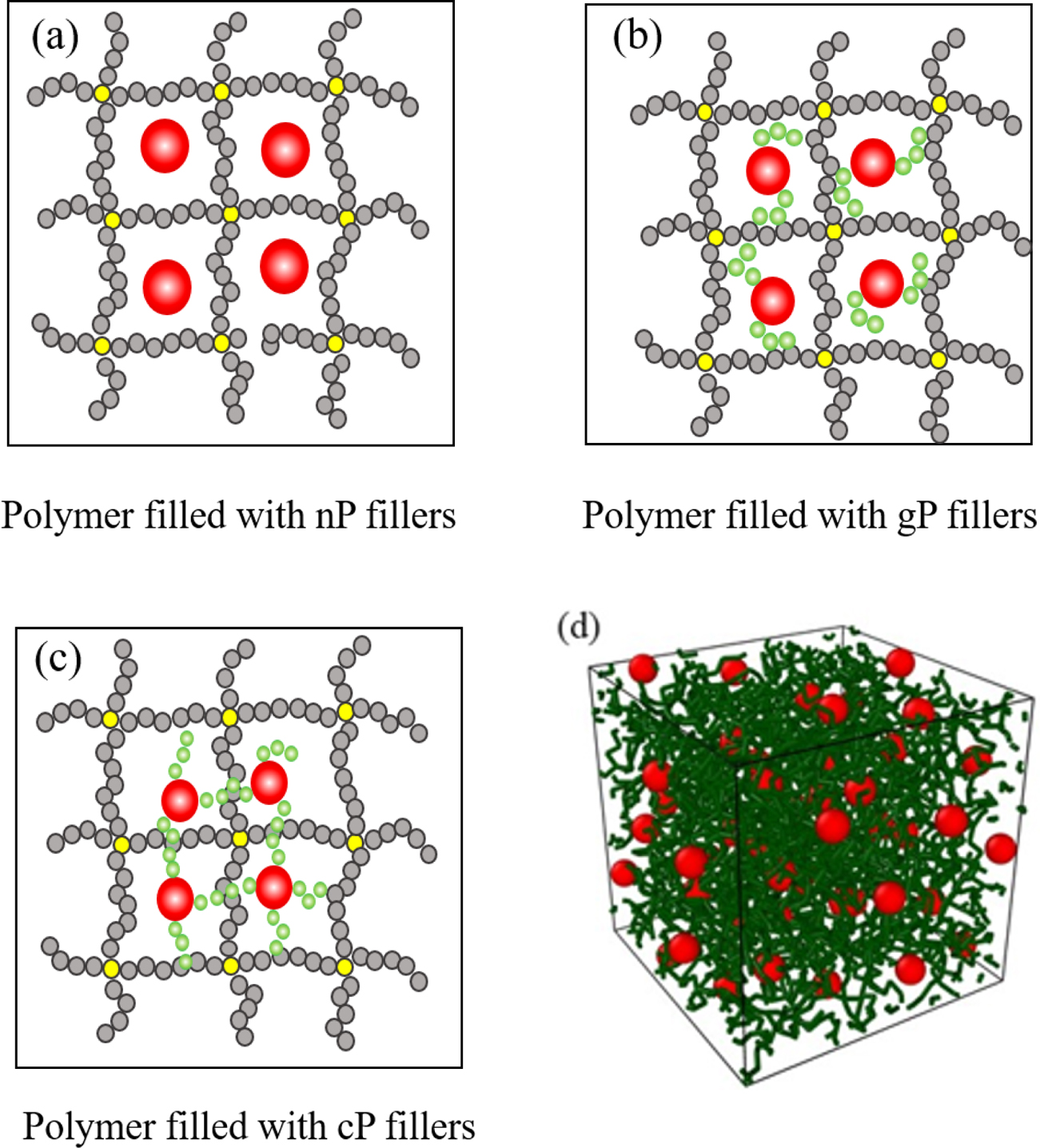