An asymmetric nonfullerene small molecule, TF-ORH, containing a nonfused electron-donating core of thiophene, furan and electron-withdrawing octylrhodanine (ORH) end groups was designed as an acceptor for polymer solar cells (PSCs). TF-ORH was synthesized via Knoevenagel condensation and the Suzuki coupling reaction. TF-ORH exhibited sufficient thermal stability and solubility for device fabrication. Compared to solution, TF-ORH film showed a red-shifted UV–Vis absorption with an absorption maximum at 596 nm (J-aggregation), which is complementary with that of the low bandgap polymer donor of poly[4,8-bis(5-(2-ethylhexyl)thiophen-2-yl)benzo[1,2-b:4,5-b']dithiophene-co-3-fluorothieno[3,4-b]thiophene-2-carboxylate] (PTB7-Th). The introduction of furan elevated the molecular orbital energy levels of TF-ORH compared to the thiophene analog, T2-ORH. Finally, a PSC fabricated using a PTB7-Th:TF-ORH blend film as the active layer exhibited a power conversion efficiency of 1.21% with an open-circuit voltage of 0.88 V and a small energy loss of 0.70 eV.

A power conversion efficiency of 1.21% was achieved in polymer solar cells based on low bandgap polymer donor, PTB7-Th, and an nonfused asymmetric nonfullerene acceptor, TF-ORH. 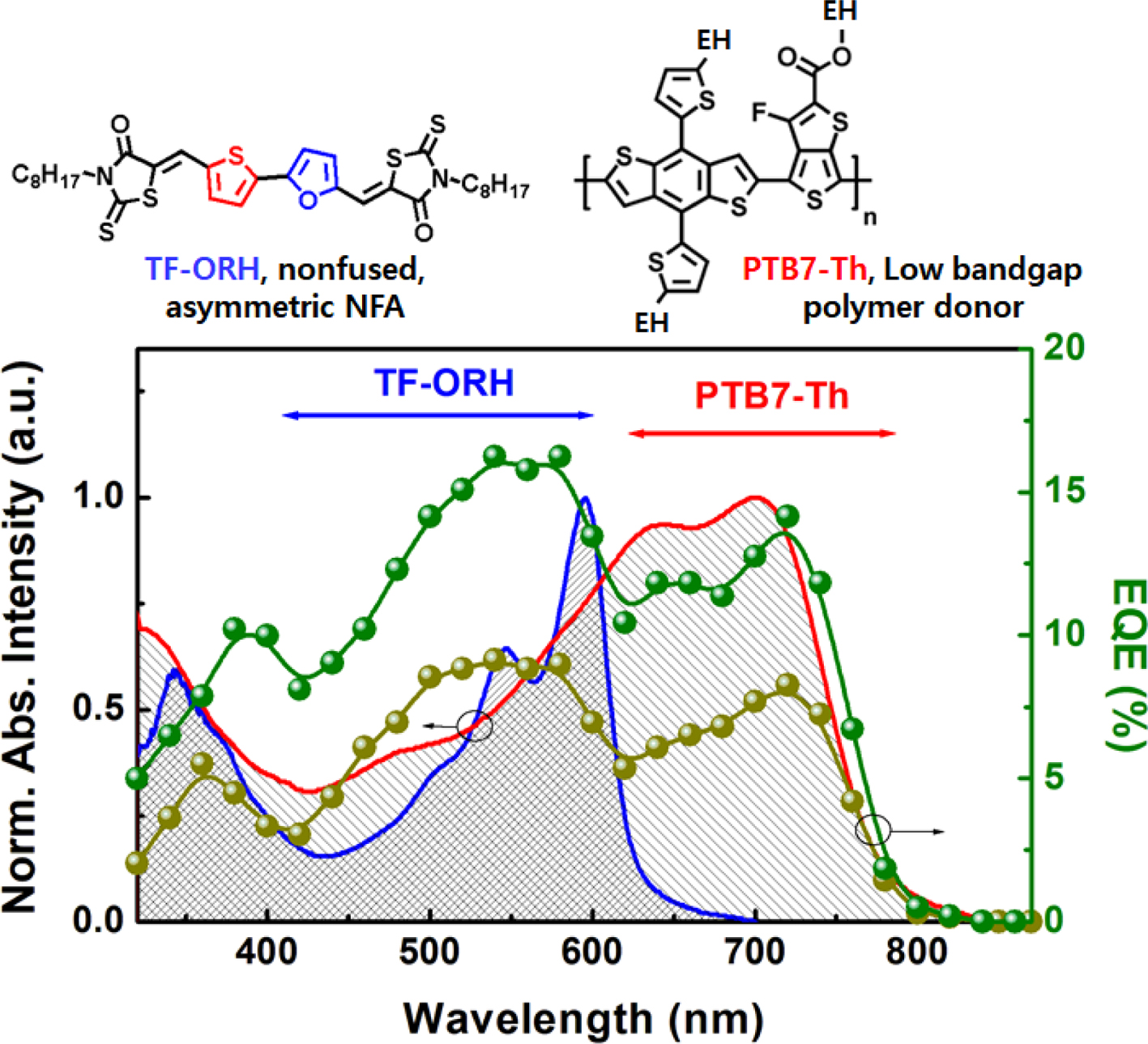 This work was financially supported by the Korea Institute of Energy Technology Evaluation & Planning (KETEP) and the Ministry of Trade, Industry & Energy (No. 20173010012960) and by the National Research Foundation of Korea (NRF) Grant funded by the Ministry of Science & ICT (NRF-2019R1A2C1003679) of the Republic of Korea. This work was supported by Kyonggi University’s Graduate Research Assistantship 2019.

Polymer solar cells (PSCs) have considered as a renewable energy source owing to their advantages, which include low weight, flexibility, ease of processability, and low cost.1-5 Much effort has been devoted to exploiting new donor and acceptor materials as well as to optimize device fabrication. From the standpoint of material synthesis, in recent years there has been a shift from using fullerene derivatives, such as [6,6]-phenyl-C61-butyric acid methyl ester (PC60BM), to using non-fullerene acceptors (NFAs) as acceptor materials. The use of NFAs solves key intrinsic drawbacks of fullerenes, which include difficult chemical structure modification, weak UV–vis absorption, fixed energy levels, low stability, and large energy losses (Elosss). The relatively easy synthesis of NFAs with various molecular structures enables the control of their physical properties, allowing the development of various electron acceptors with desirable properties. These acceptors can be used for highly efficient and stable PSCs for future practical applications.6
Acceptor–donor–acceptor (A–D–A)-type NFAs have been considered promising candidates for high efficiency PSC acceptors.7,8 In particular, remarkable power conversion efficiencies (PCEs) more than 15% have been realized in devices using ladder-type fused ring electron acceptors (FREAs) with large π-conjugated cores including indacenodithiophene and indacenodithieno[3,2-b]thiophene.9,10 Two representative A–D–A-structured low bandgap acceptors are IT-4F and Y6, both of which provide high efficiencies of >14% when combined with various wide bandgap polymer donors.11 Various synthetic strategies have been used to adjust the chemical structure of NFAs with a view to maximizing PSC efficiency, including side-chain engineering and introduction of electron-rich or electron-poor substituents into the backbones. Recently, the development of asymmetric NFAs has made significant progress toward higher PCEs, with asymmetric NFAs showing superior performance to their symmetric counterparts.12-15 Various NFAs with asymmetric cores, side-chains, and terminal groups have been designed;16-18 however, most successful asymmetric NFAs have been based on asymmetric FREA cores. Possible reasons for the superiority of asymmetric NFAs are that their structures may give rise to stronger intermolecular interactions, higher electron mobility in the film, and higher charge carrier transport. For greater detail, refer to recent reviews on the structure and characteristics of high-efficiency asymmetric acceptors.16 Meanwhile, thiophene analogs, such as selenophene,19-21 thiazole,22-24 and furan,25-27 have been utilized to develop π-conjugated polymers and small molecules. Some of these thiophene analogs of furan or selenophene have recently been introduced into asymmetric NFAs.28,29
In this study, we applied the “asymmetric core” strategy to our previously reported A–D–A-type NFA, T2-ORH, containing a nonfused bithiophene core as an electron-donating (D) unit and octylrhodanine end groups as electron-accepting (A) units.30 In the current work, one thiophene of the bithiophene core of T2-ORH was replaced with a furan moiety, resulting in a simple asymmetric NFA, TF-ORH, based on a nonfused thiophene-furan core. The synthesis and physical properties, including thermal, optical, and electrochemical properties, of TF-ORH were investigated in detail and a PSC was fabricated using TF-ORH and the low bandgap polymer donor poly[4,8-bis(5-(2-ethylhexyl)thiophen-2-yl)benzo[1,2-b:4, 5-b']dithiophene-co-3-fluorothieno[3,4-b]thiophene-2-carboxylate] (PTB7-Th).

Synthesis. The syntheses of octylrhodanine (ORH) and B-T-ORH (Scheme 1) were described in our previous literatures.18,30 Br-F-ORH and TF-ORH were synthesized via Suzuki coupling and Knoevenagel condensation reaction, respectively.

We synthesized a nonfused NFA with a simple structure, TF-ORH, containing a nonfused asymmetrical thiophene-furan core flanked by octyl-substituted rhodanine end groups. TF-ORH had sufficient solubility and thermal stability for PSC applications, and exhibited physical properties complementary to those of the low bandgap polymer donor PTB7-Th. A PSC fabricated using PTB7-Th:TF-ORH blend film exhibited a PCE of 1.21% with a VOC of 0.88 V and a small Eloss of 0.70 eV.