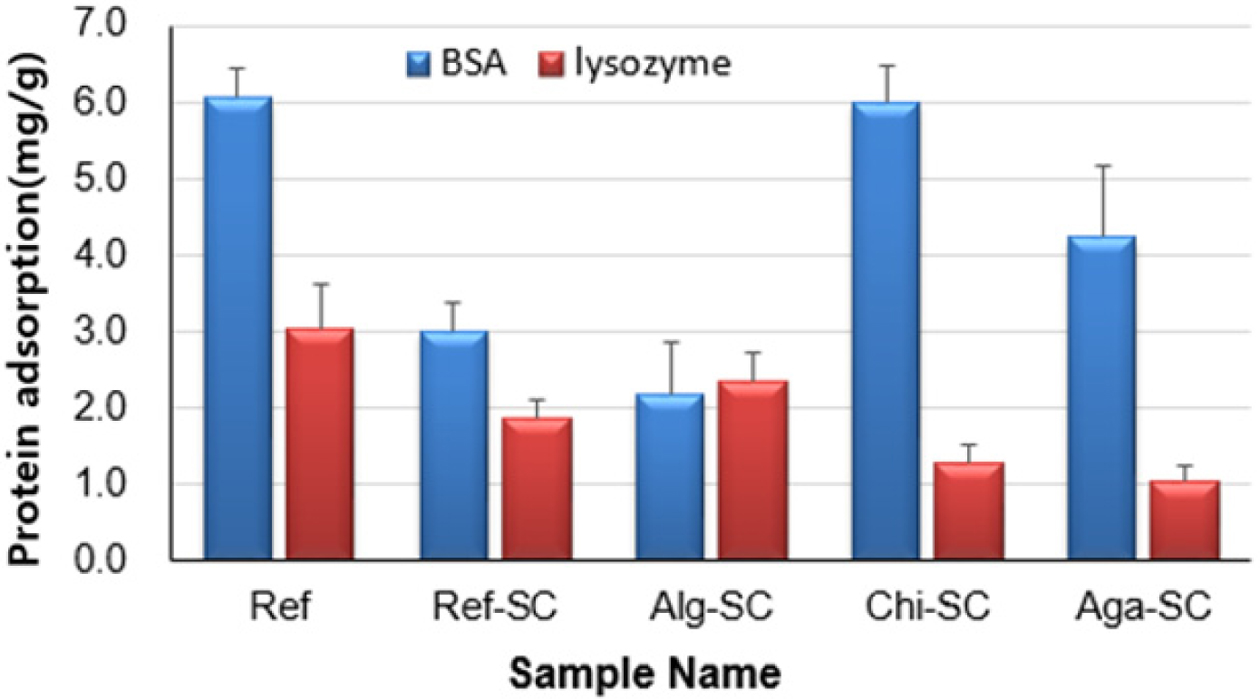 This work was supported by research grants from Daegu Catholic University in 2018.

Superporous hydrogel (SPH) has an ‘open channel’ system interconnected by a 3D hydrophilic polymer network with multiple pores with diameters from µm to mm. Therefore, when a part of the hydrogel is exposed to water or aqueous fluids, the fluids are absorbed immediately through the open space.1,2 Consequently, SPH has a very fast swelling rate and absorbs a large amount of water compared to general hydrogels. However, because SPH has weak mechanical properties due to the high expansion rate, polysaccharides including hydrophilic polymers such as sodium alginate, pectin, and chitosan or hybrid agents such as polyvinyl and alcohol are added to increase the mechanical strength.3
Recently, due to the growing interest in natural polysaccharides, they are being used to develop hydrogels for biomedical and pharmaceutical applications.4 Natural polysaccharides have various compositions and properties that cannot be easily imitated compared to synthetic polymers. Hydrogels based on natural polysaccharides are being used for various applications due to properties such as biocompatibility, biodegradability, and irritation reaction.5 The polysaccharides, which are now widely used in biomedical and pharmaceutical fields, include alginate, chitosan, dextran, carrageenan, and agarose.6,7
Alginate is a seaweed polysaccharide which is a natural anionic polymer extracted from brown algae or produced by bacteria and consists of (1-4)-linked b-D-mannuronate (M) and its C-5 epimer a-L-guluronate (G) residues.8 Alginate is a natural polysaccharide that is widely used because of its gelling properties due to the interaction between carboxylic groups and metal ions. Hydrogels obtained from alginate have properties similar to the extracellular matrix and are used in tissue engineering and regenerative medicine applications due to their biocompatibility and low toxicity.9
Chitosan is a cationic polysaccharide made from alkaline N-deacetylation of natural polysaccharide chitin extracted from the outer coverings of crustaceans, and is composed of glucosamine and N-acetyl glucosamine.10 Chitosan is widely studied in the fields of wound dressing, anticoagulants, drug delivery systems, biomedicine, and pharmaceutical research due to properties such as antimicrobial activity,11 biodegradability,12 and biocompatibility.13 In addition, as chitosan contains a large number of hydroxy groups (-OH), which helps hydrophilicity and nucleophilic amine groups (-NH) to facilitate bonding with other functional groups, it is used for various biomedical applications.14
Agarose is a linear polysaccharide extracted from red seaweed, and is composed of alternating D-galactose and 3,6-anhydro-L-galactopyranose linked by α-(1→3) and β-(1→4) glycosidic bonds and includes several ionized sulfate groups. Agarose is widely used as an agar culture medium in gel-type microbiology and in the food industry, and is utilized in biomedical applications, jellification, biocompatibility, and natural biodegradability.15
These natural polysaccharides have useful functions but are difficult to apply to hydrogel production because of the limitations in reactivity and processability.16 To overcome this problem, there is a method of bridging natural polysaccharides to existing polymers by an interpenetrating polymer network (IPN).
An IPN is a polymer comprising two or more networks which are at least partially interlaced on a polymer scale but not covalently bonded to each other. As a polymer chain from one network is physically intertwined with another network, it is difficult to separate each network.17 An IPN can produce highly incompatible polymers in a homogeneous form, such as organic-inorganic mixtures,18 and can increase the mechanical strength and toughness of the final product by using the individual properties of each network.19
Hydrogel contact lenses are preferred by many because of their flexible and comfortable fit, but low oxygen permeability can cause eye health problems. Silicone hydrogels containing silicone monomers have higher oxygen permeability compared to hydrogel contact lenses, but have limitations such as reduced wettability due to hydrophobic surfaces and easy adsorption of proteins and lipids. Accordingly, there is a need to develop high-performance contact lens materials to overcome problems such as low oxygen permeability of conventional hydrogel contact lenses and reduced surface wettability of silicone hydrogel contact lenses.
The purpose of this study is to prepare a porous contact lens using a foaming agent in order to compensate for the disadvantages of the hydrogel and silicone hydrogel contact lenses and make use of the advantages. In order to improve the function of the porous hydrogel, ionic natural polysaccharides are introduced. In addition, the effects of the ionic properties of natural polysaccharides on the physical properties of contact lenses were also investigated.

Reagent and Sample Preparation. This study used 2-hydroxyethylmethacrylate (HEMA, Sigma-Aldrich) which is a basic monomer, methacrylic acid (MAA, JUNSEI) which is a hydrophilic monomer, and styrene (Sigma-Aldrich) which is a hydrophobic monomer as the reagents to make the hydrogel contact lenses. In addition, sodium carbonate (SC, Sigma-Aldrich) was used as the foaming agent, ethylene glycol dimethacrylate (EGDMA, Sigma-Aldrich) as the cross-linking agent, and 2,2-azobis(isobutyronitrile) (AIBN, JUNSEI) as the initiator (Figure 1). Natural polysaccharides such as anionic alginate, neutral agarose, and cationic water-soluble chitosan were used to improve the function of the fabricated porous hydrogel. The water-soluble chitosan was supplied by BIOPOLYTECH Co., Ltd. (Figure 2). In terms of IPN, N,N'-methylenebisacrylamide (MBAA) was used as the cross-linking agent and ammonium persulfate (APS) as the initiator, which are Sigma-Aldrich products.
Thermal polymerization was performed on the polymacon contact lens without the foaming agent and on the porous hydrogel contact lens with the foaming agent at 80 °C for two hours according to the casting mold method. The general hydrogel contact lens without the foaming agent was referred to as Ref, and the contact lens with sodium carbonate as the foaming agent was referred to as Ref-SC (Table 1).
The IPN solutions were prepared by producing alginate, agarose, and water-soluble chitosan as a 1% solution, respectively, and adding 0.3% of MBAA (cross-linking agent) and APS (initiator). The IPN procedure was performed by immersing Ref-SC contact lenses in each IPN solution for 24 h at 37 oC (Figure 3). The samples that were IPN-treated with alginate, agarose, and chitosan were referred to as Alg-SC, Aga-SC, and Chi-SC, respectively.
Physical Properties. The physical and chemical properties of the fabricated samples such as the water content, refractive index, contact angle, light transmittance, and oxygen permeability were measured according to ISO 18369-4:2017. For each measurement item, we averaged five measurements for each sample.
The refractive index was measured by an Abbe Refractometer (ATAGO DR-A1) after washing each IPN-treated sample twice in phosphate-buffered saline (PBS) and removing water with a wiper.
The water content was measured according to ISO 18369-4:2017 and was calculated by using the following eq. (1).

WC(%) is the water content in an equilibrium state, Wswell is the weight of the sample swelled for 24 h, and Wdry is the weight of the sample dried in an oven for 16 h.
The contact angle of the samples hydrated for 24 h was measured by using a DSA30 from Kruss GmbH by the sessile drop method. We dropped PBS solution 3 µL on the surface of the lens to measure the angle of the water droplet twice per second for 10 s.
The light transmittance was measured in the range of 200~800 nm, and we used Agilent’s Cary 60 UV-Vis as the measuring instrument.
The oxygen permeability was measured by the polarographic method and we calculated the DK/t by measuring the current value using Rehder’s 201T. The thickness of the samples was measured by using a low-pressure dial gauge (Mitutoyo, VL-50-B). The curvature radius of the polarographic cell was 8.7 mm and the current value was measured after stabilizing at 35±0.5 oC (equal to the temperature of the eye) for at least one hour.
Protein Quantification. In terms of protein, this study used anionic protein bovine serum albumin (BSA) and cationic protein lysozyme, which are similar in shape and chemical properties to human albumin. First, we measured the hydrated weight of each sample to absorb protein and prepared each protein in a solution of 5 mg/mL in PBS. Then, we poured the protein solution into vials and immersed each sample at 37 oC for an incubation time of 24 h to absorb the protein. Next, each sample was washed twice with PBS and added to a solution of 3% sodium dodecyl sulfate (SDS) dissolved in distilled water and heated to 95 oC for 15 min. The proteins attached to the samples were desorbed by shaking the solution gently with a vortex for three minutes. The absorbance was measured by using Agilent’s Cary 60 UV-Vis, and we confirmed the absorbance value at 280 nm, which is the maximum absorption wavelength of protein. The molar extinction coefficient e of BSA is 3.35 (mg-cm/g), and the e of lysozyme is 13.2 (mg-cm/g), and the amount of protein adsorbed was calculated by using eq. (2) below.20

Antimicrobial Activity. This study used E. coli (ATCC 10536) to examine the antimicrobial activity of the natural polysaccharides with ionic properties. The strain was provided by the Korea culture center of microorganisms (KCCM). The liquid medium used for the antimicrobial activity test was prepared by mixing 2 g of peptone and 1.2 g of beef in 40 mL of distilled water and performing an autoclave sterilization treatment at pH 7.0, and the E. coli was primary cultured in the liquid medium. Each sample was added to the vial containing the liquid medium, and 1 µL of the cultured E. coli was added and incubated at 35 oC for 16 h, and subsequently diluted 10000 times. 1 mL of the diluted solution was smeared to dry film and incubated at 35 oC for 24 h. E. coli 3M petrifilmTM was used as the dry film medium. The antibacterial test was repeated three times and expressed as an average value.