The properties of rubber composites depend strongly on the compatibility of the rubber matrix and particulate filler. The polarity difference between the two phases has always been the main concern. Natural rubber (NR) and halloysite nanotubes (HNT) are one of the examples of the incompatible system. In this regard, a suitable compatibilizer is recommended to mediate the interactions. In this study, the maleated natural rubber (MNR) with various amounts of maleic anhydride (MA) was introduced as a compatibilizer to this composite. By increasing MA contents, scorch and curing times were increased whereas the maximum torque and the torque differences exhibited the highest values at the MA content of 2 phr. Payne effect was also implemented to monitor their rubber-filler interactions. The MNR with 2 phr of MA exhibited the lowest filler-filler interaction as shown by a lower decrement of storage modulus at high strain. This rubber composite also exhibited the optimum tensile and tear strengths. It is clearly highlighted that application of the MNR with a suitable MA amount enables to increase the rubber-filler interaction significantly and therefore improve a HNT dispersion. Hence, the use of MNR provided the great potential to compatibilize NR and HNT.

The Maleated Natural Rubber (MNR) was prepared and introduced as a compatibilizer to the composites based on Natural Rubber (NR) and Halloysite Nanotubes (HNT). From the results obtained, it is clear that MNR has greatly influenced the enhancement of the mechanical properties. MNR enables to mediate the rubber-filler interaction which was verified by the Payne effect. 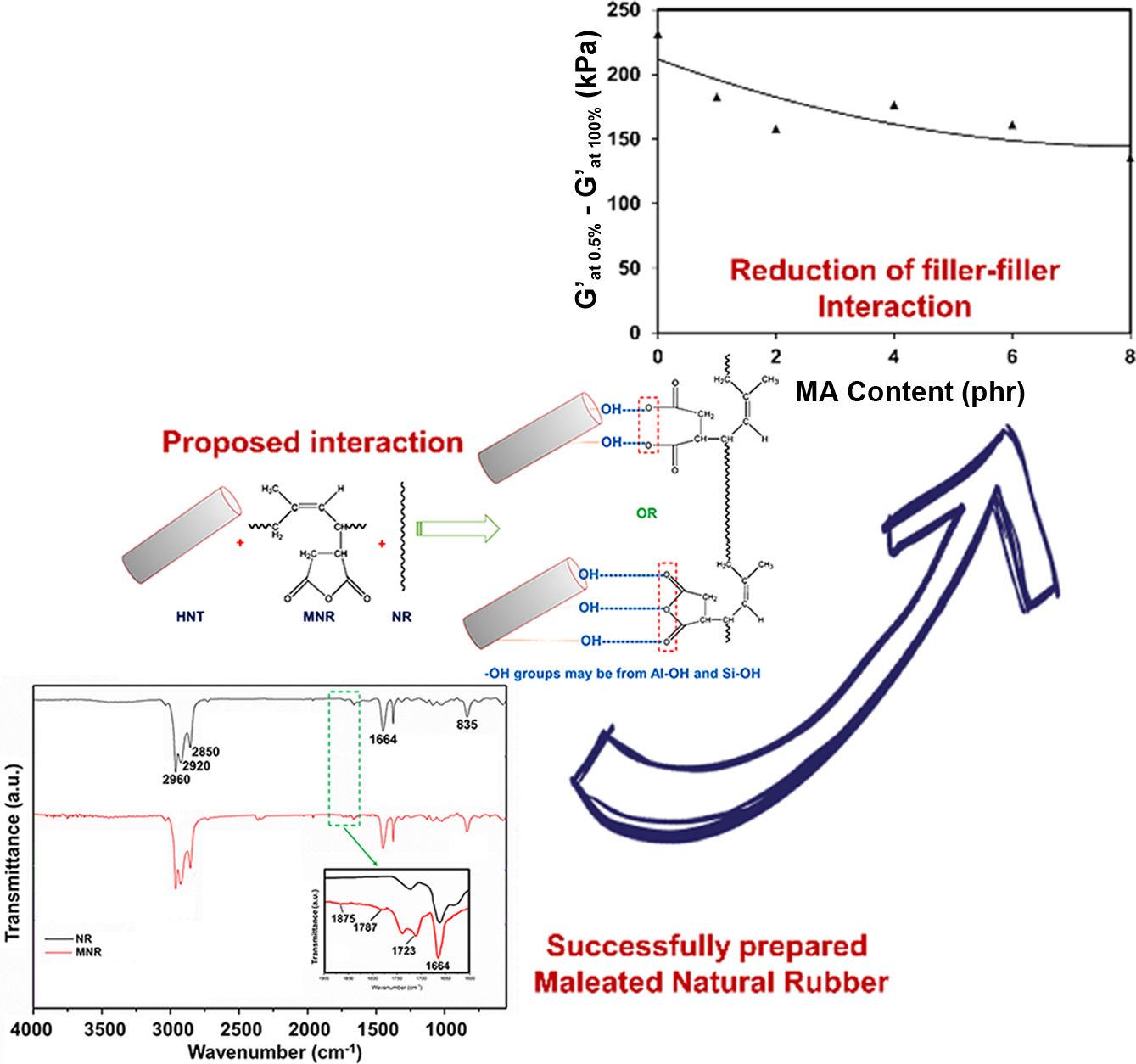 We gratefully acknowledge the financial support by Prince of Songkla University through a Research Grant for New Scholar (Grant No. SAT590650S).

Improving the performance of rubber can be achieved by adding small amount of nanofillers and this technique has drawn considerable attention during the last decades.1-3 An obvious enhancement of physical and other related properties of rubber depends greatly on several factors such as the filler aspect ratio, the degree of dispersion, and the alignment of the particulates. Halloysite nanotube (HNT) is the nanofiller that has been recently available in many types of matrix.4-7 This is because of the very special characteristic that is formed by surface weathering of aluminosilicate minerals. The surface chemistry of HNT is similar to clay, making this material incompatible with the non-polar rubber such as NR. Scientists have been trying to solve this drawback by several approaches in order to improve their compatibility. These included a very common method like using the silane coupling agents8 as well as using the compatibilizers,9 and adjusting the methods of preparation.10
Addition of compatibilizer to incompatible system has greatly influenced the overall structure of the composites. Most used compatibilizers were based on modified rubber which is prepared by introducing some functional groups to increase its polarity. In this regards, higher polarity of rubber is achieved and it is expected to increase the compatibility between non-polar rubber and HNT. One of the well-known methods has been the grafting of maleic anhydride (MA) onto the rubber molecule. For example, Pasbakhsh et al.11 utilized EPDM-g-MA to compatibilize between EPDM and HNT. It was obvious that EPDM-g-MA reduced a tendency of HNT agglomeration and hence improved the HNT dispersion. This was described to be due to a better interaction between the hydroxyl groups on HNT surface and succinic anhydride groups of the EPDM-g-MA. Similar approach was also carried and found in the literature.12,13 They also proposed possible interaction gained between the filler and modifier. Another example of using modified rubber to improve the compatibility between non-polar rubber and HNT was the use of carboxylated styrene butadiene rubber reported by Du et al..10 It was shown that strong interfacial bonding of rubber and HNT was formed, making the HNT dispersed uniformly and even individually in the rubber matrix. The mechanical properties, especially the modulus and hardness, are significantly increased by introducing this technique. From these examples together with the structure’s point of view, the interaction between NR and HNT can be made possible by introduction of the modified rubber.
In this study, modified rubber was specially focused towards the use of maleated natural rubber or MNR. Based on the chemical structure of MNR, it was anticipated to enhance the compatibility of these two components especially at the outer layers of HNT (silanol and/or siloxane groups). To date, no reports have been published concerning to the use of MNR as a compatibilizer in the HNT filled NR composites. The study focused mainly on the curing, mechanical properties and dynamic properties of the composites. The findings obtained in this work will lead to the scientific perspective on the role of MNR as a compatibilizer for NR/HNT composites and extend to be source of detailed information for manufacturing the rubber products containing the HNT in the system.

Materials. STR 5 L was the grade of NR used as a main matrix both in compounding the composite and preparing the MNR, it was manufactured by Chalong Latex Industry Co., Ltd., Thailand. MA was used to graft it onto NR molecule, it was obtained from Sigma-Aldrich (Thailand) Co., Ltd. Bangkok, Thailand. HNT was mined and supplied by Imerys Ceramics, New Zealand. HNT consists of the following components, e.g., SiO2 (51.415 wt%), Al2O3 (34.15 wt%), Fe2O3 (0.3 wt%), TiO2 (0.08 wt%) as well as MnO, CaO, MgO, K2O and Na2O as traces. Other related properties of this HNT are listed in Table 1.14 The curing activators namely ZnO and stearic acid were purchased from Global Chemical Co., Ltd., Samut Prakan, Thailand and Imperial Chemical Co., Ltd., Bangkok, Thailand respectively. N-cyclohexyl-2-benzothiazole sulfenamide (CBS) as accelerator, was purchased from Flexsys America L.P., West Virginia, USA, and sulfur as vulcanizing agent, was purchased from Siam Chemical Co., Ltd., Samut Prakan, Thailand.
Preparation of MNR. Grafting of MA e.g., 1-8 phr onto NR was done by mixing the NR with MA in a Brabender Plasticorder at 145 °C at a rotor speed of 60 rpm under normal atmosphere. The mixing was last for 10 min. The resulting rubber was purified by reprecipitation only for the purpose of characterization by FTIR. The resulting MNR was then purified to confirm grafting of MA onto NR. This was carried out by dissolving the rubber sample in toluene at room temperature for 24 h and then at 60 °C for 2 h, the soluble part was collected and precipitated in acetone. The sample was dried in a vacuum oven at 40 °C for 24 h. The purified MNR was finally characterized for FTIR spectrum.
Preparation of NR/HNT Composites. Table 2 lists the main ingredients used for preparing the rubber composites, in which the main matrix used was separate accordingly. The entire amounts of additives were mixed in a Brabender (Plastograph® EC Plus, Mixer W50EHT 3Z) and just after the dumping, the compounds were passed through a two-roll mill to avoid excess heat. The compounds were then compressed into certain shapes using a hydraulic hot press, with the vulcanizing times obtained by a moving-die rheometer (MDR) as described later.
Attenuated Total Reflection-Fourier Transform Infrared Spectroscopy (ATR-FTIR). The FTIR spectra of MNR were analyzed using a Bruker FTIR spectrometer (Tensor27) with a smart durable single bounce diamond in the ATR cell. Each spectrum was recorded in transmission mode after 32 scans per spectrum, with 4 cm-1 resolutions from 4000 to 400 cm-1.
Measurement of Curing Characteristics. The curing characteristics of the composites were determined using an MDR (Rheoline, Mini MDR Lite) at 150 oC. Torque, scorch time (ts2) and curing time (tc90) were determined according to ASTM D5289.
Measurement of Mechanical Properties. The samples were cut into a dumbbell shape according to ASTM D412. The tensile tests were carried out with a universal tensile machine (Tinius Olsen, H10KS) at a cross-head speed of 500 mm/min. This is to determine 100% modulus, 300% modulus, tensile strength and elongation at break. Further, the tear strength of the composites was also tested using the same machine by following the ASTM D624 with a cross-head speed of 500 mm/min. The tear strength recorded was the average of five repeated tests for each compound.
Dynamic Properties. The dynamic properties of the NR/HNT and MNR compatibilized NR/HNT composites were studied using a Rubber Process Analyzer model D-RPA 3000 (MonTech Werkstoffprüfmaschinen GmbH, Buchen, Germany). The composite sample was cured at 150 oC based on the curing time observed from Rheoline Mini MDR Lite (Prescott Instrument Ltd., UK). Then, temperature was cooled down until 60 oC, frequency 10 Hz and varying strains in the range of 0.56 to 90%. The raw outputs in term of storage modulus (G') and damping characteristic (tan d) were recorded whereby the rubber-filler interaction of the composites were monitored through the Payne effect. Payne effect can be calculated according to the equation below;

Where G'i is the G' at 0.5% strain and G'f is the G' at 90% strain. Higher Payne effect indicates lower rubber-filler interaction.
Scanning Electron Microscopy. The morphology of the rubber sample was screened by a scanning electron microscope (Quanta 400) to gain the detailed information on the dispersion of HNT filler in both NR and MNR. To electrostatic charge during scanning, fractured samples were coated with gold palladium prior to be scanned. 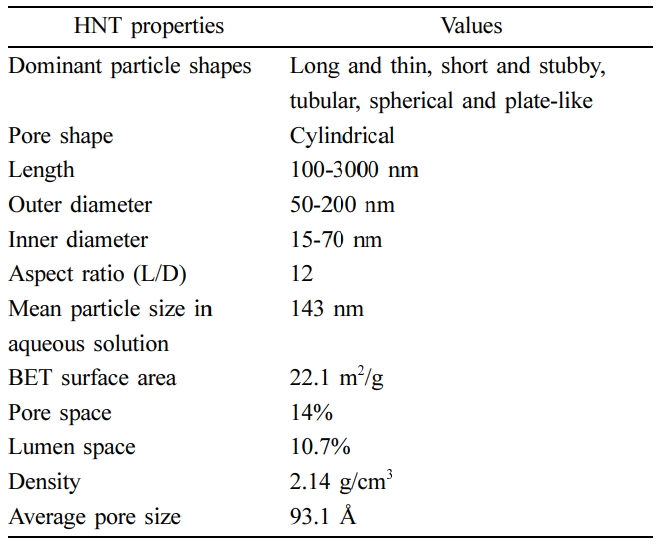 The aim of this study was to use MNR as compatiblizer for NR/HNT composites. It can be seen that the overall properties of the composites were clearly enhanced when MNR was used as a compatibilizer. MNR has very special functional group that can form hydrogen bonding with the hydroxyl groups available on the HNT inner and outer surface. The obtained interaction is possible to enhance the mechanical properties such as tensile strength, modulus and tear strength of the composites which is again verified by the reduction of Payne effect observed from the dynamic properties. It has been clearly highlighted in this present work that the use of MNR resulted in an enhanced rubber-HNT interaction and reduced filler-filler interaction which provides great benefit to the mechanical and dynamical properties. This finding will lead to the scientific understanding on the role of MNR as a compatibilizer for NR/HNT composites and can be source of useful information for manufacturing the rubber products based on this composites. To some extent, this could lead to a modification of processing method without requiring the use of silane coupling agent which is complicated and costly.