In this study, a way to reinforce the properties of ultrahigh molecular weight polyethylene (UHMWPE)/vitamin E (VE) nanocomposites was put to use by adding graphene oxide (GO) combined with gamma-ray irradiation cross-linking. The influences of adding GO and irradiation cross-linking treatment on the thermal and mechanical properties were studied, especially the effect of GO doping on irradiation cross-linked UHMWPE/VE nanocomposites. The results show that GO filling has no significant effect on melting temperature and gel content decreased at a small degree, but the crystallinity has been improved obviously. In addition, the ball indentation hardness and scratch resistance were enhanced as well. The comprehensive effects of improved crystallinity and reduced cross-linking degree as well as the good mechanical properties of GO doping were responsible for this result.

A way to reinforce the properties of ultrahigh molecular weight polyethylene (UHMWPE)/Vitamin E (VE) nanocomposites was put to use by adding graphene oxide (GO) combine with gamma-ray irradiation crosslinking. GO filling has no significant effect on melting temperature and gel content decreased at a small degree, but the crystallinity has been improved obviously. In addition, the ball indentation hardness and scratch resistance were enhanced as well. 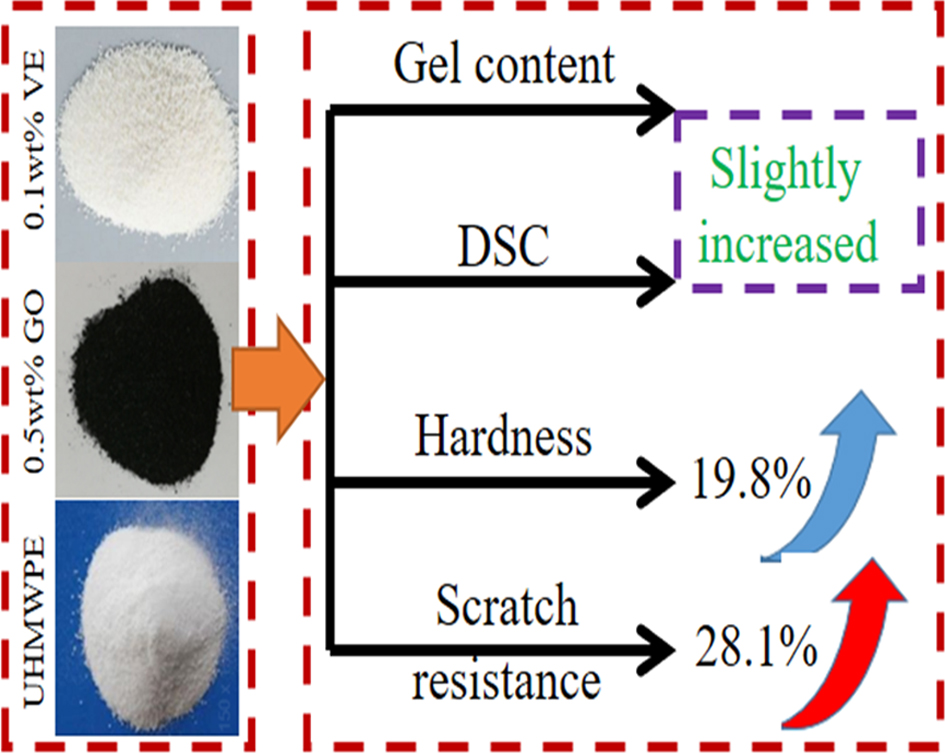 This study is supported by the Additive Manufacturing Products Supervision and Inspection Center of Jiangsu Province, Wuxi Institution of Supervision & Testing on Product Quality, Wuxi, China.

Materials and Materials Preparation. Powdered UHMWPE (GUR1050) has a density of 0.93 g·cm-3 with an average molecular weight of five million and the mean particle diameter of about 140 μm, and was purchased from American Ticina Company. High-purity graphite powder (99.9 wt%, 325 mesh) was provided by Qingdao Jinrilai Co. Ltd. China, and was used to prepare GO. Other chemical reagents were analytical grade and were supplied by Sinopharm Chemical Reagent Beijing Co., Ltd.
GO was prepared in accordance with the modified Hummers method.20 The irradiation cross-linked UHMWPE/VE/GO composites with the concentration of 0.1 wt% VE and 0.5 wt% GO was fabricated by means of liquid ultrasonic dispersion, high speed ball milling, hot pressing molding and irradiation cross-linked by γ-ray, the detailed steps are as follows: First of all, 0.1 g VE and 0.5 g GO powder were placed in a beaker with 100 mL alcohol solution and ultrasonic treated for 0.5 h, then 99.4 g UHMWPE powder was added into the beaker and continue ultrasonic treated for 1 h to obtain a homogeneous solution. Secondly, the mixed solution was treated by high speed ball milling at a speed of 400 rpm for 2 h and then kept in a water bath at 60 oC to remove the ethanol until the alcohol was completely evaporated. Thirdly, the mixture powder was pressed in a model at 5 MPa for 0.25 h followed by heating treatment at 200 oC for 2 h in a hot air oven, and then pressed at 10 MPa until reached room temperature. Finally, the specimens were cut into different sizes of samples then vacuum packed and irradiated by γ-ray at a rate of 0.5 KGy/h at room temperature, the total irradiation dose was 100 KGy.
Gel Content. According to ASTM D2765-01,21 the gel content after irradaition cross-linking of UHMWPE/VE/GO composites was calculated in terms of the following formula.

where f is the filler content, DH is the melting enthalpy of samples and DH0 is the enthalpy of melting of a 100% crystalline UHMWPE with the data of 293 J/g.22
Ball Indentation Hardness. The ball indentation hardness of different composites were measured by the MFT-5000 tribometer and calculated by the following equation according to the standard ISO2 039-73.23

where H is the indentation hardness of samples (N/mm2); p is the maximum experimental force (N); D is the diameter of the ball (mm); h is the maximum indentation depth (mm). The diagrammatic sketch of ball indentation hardness test is shown in Figure 1.
Scratch Test. Scratch resistance is also a way to evaluate the mechanical properties of materials. In this paper, the scratch test of different composites was also measured by the MFT-5000 tribometer, the scratch coefficient is calculated by the following equation.

where μ is scratch coefficient; FT is the scratch resistance; FN is normal pressure. The diagrammatic sketch of scratch test is shown in Figure 2.
The experimental load is 1 N with 12 mm scratching length at a speed of 0.2 mm/s, MFD-D profilometer was used to scan the scratch morphology after test. Diagrammatic sketch of parameters for scratch test is shown in Figure 3.