In this study, two small-molecules, p- and o-DPP-F-PhCN, were synthesized via a Suzuki coupling reaction and used as nonfullerene acceptors (NFAs) for poly(3-hexylthiophene) (P3HT)-based polymer solar cells (PSCs). The physical properties of the molecules were examined in terms of the substituent position and the effect of the furan moiety. The introduction of a furan moiety resulted in higher phase-transition temperatures and higher-lying molecular orbital energy levels of the molecules. Substitution at the ortho position also elevated the energy levels of the molecules, resulting in the highest-lying values for o-DPP-F-PhCN. A relatively enhanced and red-shifted UV–vis absorption of o-DPP-F-PhCN indicated its stronger molecular aggregation. PSCs based on two DPP-F-PhCNs exhibited similar device efficiencies. The stronger aggregation behavior of o-DPP-F-PhCN led to a device with a better external quantum efficiency profile; however, the enhanced orbital interactions and resulting stabilized the lowest unoccupied molecular orbital level of o-DPP-F-PhCN led to a relatively low open-circuit voltage.

Two DPP-based small molecules of p- and o-DPP-F-PhCNs were synthesized via a Suzuki coupling reactions and showed similar device efficiencies when used as nonfullerene acceptors for poly(3-hexylthiophene)-based polymer solar cells. 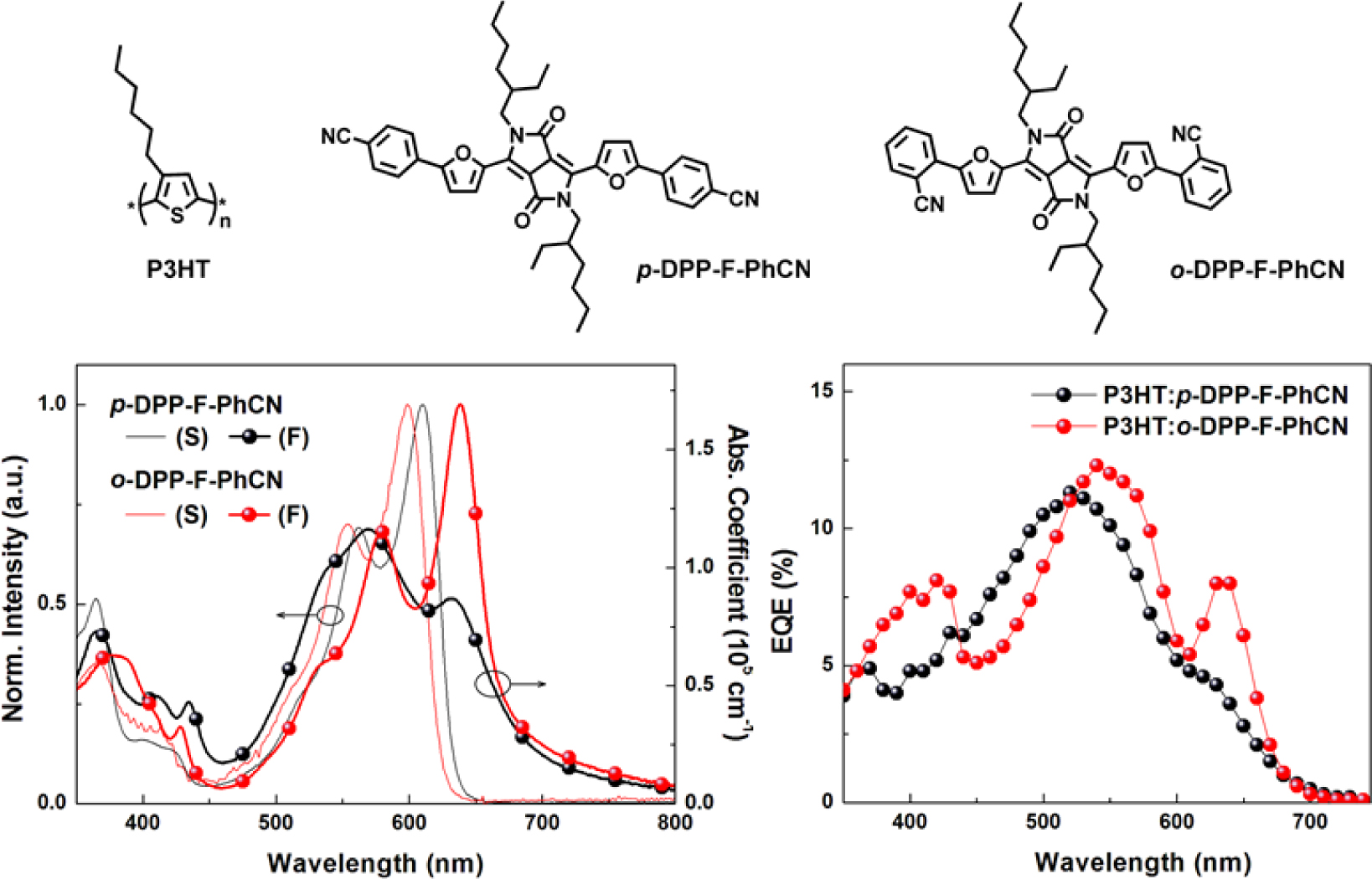 This work was supported by Kyonggi University Research Grant 2017.

Information is available regarding 1H and 13C NMR spectra, UV-vis absorption, and all-OSC characterization. The materials are available via the Internet at http://journal.polymer-korea.or.kr.

Recently, nonfullerene acceptors (NFAs) have been spotlighted as replacements for the traditional fullerene acceptors in polymer solar cells (PSCs). Most successful examples are acceptor–donor–acceptor (A–D–A)-type small-molecule NFAs composed of ladder-type electron-donating cores (e.g., indacenodithiophene or indacenodithieno[3,2-b]thiophene) and electron-withdrawing dye end groups (e.g., rhodanine (RH) or 1,1-dicyanomethylene-3-indanone).1,2 Continuous and intensive efforts toward the development of various A–D–A-type NFAs has opened a path to the development of high-efficiency PSCs. A certified power conversion efficiency (PCE) of 17.29% was achieved in 2018 using a solution-processed tandem PSC in which two NFAs (F-M and COi8DFIC) were used in the rear (PBDB-T:F-M) and front (PTB7-Th:COi8DFIC:PC71BM) subcells, respectively, resulting in high external quantum efficiency (EQE) responses greater than 70% in the whole UV–vis and infrared absorption ranges covering wavelengths as long as 1000 nm.3 More recently, a high PCE of 17.0% was also demonstrated in single-junction PSCs composed of PBDBTF and BTP-4Cl-12 as a polymer donor and an NFA, respectively, through side-chain engineering.4 However, most of the reported high-efficiency NFAs have been composed of ladder-type aromatic rings with extended p-conjugation, which requires multiple synthesis steps and inevitably involves high synthesis costs; thus, this approach is not applicable to the future commercialization of PSCs. Consequently, NFAs based on nonfused core systems have recently been attracting increasing interest.1,5-8
Side-chain engineering (i.e., length and bulkiness) and/or substituent effects (i.e., electron-donating or -withdrawing groups) have been explored to fine-tune the physical properties of organic semiconducting materials, including their solubility and molecular aggregation behavior.1,4,9 The position of side chains and substituents can also affect the physical properties of the resultant molecules. For example, Janssen et al. systematically investigated the influence of the position of the alkyl side chain on the photovoltaic properties of 2,5-diketopyrrolo[3,4-c]pyrrole (DPP)-based small molecules10 and found that the morphology and crystallization of the small molecules varied according to the side-chain position. In addition, our group has reported the effect of hexyl or cyanide (CN) groups on the photovoltaic properties of benzothiadiazole–thiophene-based small molecules (2-, 3-, and 4-hexyl-substituted DH5TBs)11 or DPP–thiophene-based small molecules (p-, m-, and o-DPP-PhCNs), respectively.12
In the present work, we developed two small molecules, p- and o-DPP-F-PhCN, in which electron-withdrawing CN groups were introduced at different positions (para and ortho, respectively) on the phenyl end groups, and observed their different molecular packing behaviors and photovoltaic properties. In particular, we used differential scanning calorimetry (DSC), UV–vis absorption spectroscopy, and cyclic voltammetry (CV) measurements to systematically investigate how the introduction of a furan moiety altered the physical properties of the molecules.

Synthesis and Thermal Properties. The two small molecules p- and o-DPP-F-PhCN were synthesized via a Suzuki coupling reaction between the dibromides of a DPP-furan-based core (DPP-F-Br) and two corresponding boronic esters (4- and 2-cyanophenylboronic acid pinacol ester, respectively) using a Pd catalyst (Scheme 1). The synthesized small molecules were successfully characterized by 1H- and 13C NMR spectroscopy (Figures S1–S2) and elemental analysis.
The thermal characteristics of the small molecules are summarized in Table 1. The two compounds were thermally stable, showing 5% weight losses upon being heated to 380 °C in TGA analysis (Figure 1(a)). The phase-transition temperatures were measured by DSC (Figure 1(b)). The melting temperatures (Tm) of p- and o-DPP-F-PhCN were 300 and 206 oC, respectively. We likewise observed a higher Tm for the para-substituted analogue in our previous work with DPP-PhCNs,12 where p-DPP-PhCN exhibited a higher Tm (251 °C) than o-DPP-PhCN (Tm = 187 °C). In addition, the introduction of furan resulted in higher Tm values; for example, the Tm of p-DPP-F-PhCN (300 °C) was higher than that of the thiophene analogue p-DPP-PhCN (Tm = 251 °C) by approximately 50 °C. Notably, o-DPP-F-PhCN exhibited an enthalpy change (ΔHm = −100 J/g) more negative than that of p-DPP-F-PhCN (−85 J/g), reflecting the relatively better crystallinity of o-DPP-F-PhCN. By contrast, in our previous work on DPP-PhCNs, p-DPP-PhCN exhibited a ΔHm (−111 J/g) more negative than that of o-DPP-PhCN (−86 J/g).12

Optical and Electrochemical Properties. The UV–vis absorption spectra of p- and o-DPP-F-PhCN in the solution and film states are shown in Figure 2. In the solution state, p- and o-DPP-F-PhCN exhibited similar UV–vis absorption profiles; however, the absorption maximum of p-DPP-F-PhCN (lmax = 601 nm) was slightly red-shifted compared with that of o-DPP-F-PhCN (lmax = 599 nm), in agreement with the trend observed for DPP-PhCNs. That is, the conjugation in the para-substituted analogue might be slightly longer than that in the ortho-substituted analogue. In the spectra of p- and o-DPP-F-PhCN films, the absorption peaks were broader than those in the spectra of the solution state samples. In particular, as shown in Figure S3, the absorption maximum of o-DPP-F-PhCN was dramatically red-shifted by approximately 40 nm from its position in the solution-state spectrum (lmax = 599 nm) to that in the film-state spectrum (lmax = 638 nm). We observed a similar phenomenon in our previous experiments with p-DPP-PhCN (but not o-DPP-PhCN),12 where the greater red-shift in the absorption of p-DPP-PhCN (lmax = 670 nm) was explained by its high degree of molecular aggregation. Interestingly, the film aggregation behavior and absorption profiles of the small molecules used in the present study were controlled by the nature of the p-bridge (i.e., thiophene vs. furan) as well as by the position of the substituents (i.e., para vs. ortho). In addition, the optical bandgaps (Eg,opt) of the small molecules were calculated to be 1.80 and 1.86 eV for p- and o-DPP-F-PhCN, respectively, using the following equation: Eg,opt = 1240/lonset (eV), where lonset is the wavelength of the absorption onset of the small molecule films.
The highest occupied molecular orbital (HOMOelec) and the lowest unoccupied molecular orbital (LUMOelec) energy levels were estimated from the CV, as shown in Figure 3, using the following equations: HOMOelec = (Eonset,ox − E1/2,ferrocene + 4.8) eV and LUMOelec = (Eonset,red − E1/2,ferrocene + 4.8) eV, where Eonset,ox and Eonset,red are the onset potentials of oxidation and reduction, respectively, assuming that the energy level of ferrocene (Fc) is 4.8 eV below the vacuum level.6,16-18 The position of the substituent (CN) affects the energy levels of the small molecules: para-substitution resulted in relatively low-lying HOMOelec/LUMOelec energy levels for p-DPP-F-PhCN (−5.37/−3.57 eV) relative to those of o-DPP-F-PhCN (−5.32/−3.53 eV). Both small molecules have sufficient HOMO and LUMO offsets with respect to the P3HT polymer used as a donor in PSC fabrication, enabling not only electron transfer from the P3HT to the small molecules but also hole transfer from the small molecules to the P3HT (i.e., Channel II charge generation).12
Figure 2(c) compares the energy levels of DPP-F-PhCNs with those of the DPP-PhCN thiophene analogues to illustrate how the incorporation of the furan moiety affects the electrochemical properties of the small molecules; the optical LUMO energy levels (LUMOopt) were estimated from the HOMOelec energy levels and the optical Eg,opt (LUMOopt = HOMOelec + Eg,opt). The furan substitution elevated both the HOMO and LUMO energy levels of the small molecules, where it exerted a slightly stronger effect on the LUMO levels than on the HOMO levels.
Photovoltaic Performances. PSCs were fabricated with the configuration ITO/PEDOT:PSS/active layer/LiF/Al. Both small molecules could act as acceptors when combined with regioregular P3HT as a polymer donor because of the sufficient HOMO and LUMO offsets between the donor and acceptors, as previously discussed (Figure 3). Moderate PCEs of ~0.3% were obtained with the P3HT:DPP-F-PhCN devices. The J–V and EQE curves were recorded in air under white-light AM 1.5G illumination (100 mW cm−2) and are shown in Figure 4. The active area (i.e., the aperture area in a mask) was defined as 9 mm2. The optimized photovoltaic properties are summarized in Table 2.
The short-circuit current density (JSC) values were found to be similar between the devices with the two DPP-F-PhCNs as well as between the devices with the two DPP-PhCNs. The maximum EQE intensities of the DPP-F-PhCN-based devices were also similar; however, we note that the EQE profile of the o-DPP-F-PhCN-based device was red-shifted relative to that of the p-DPP-F-PhCN-based device, consistent with the absorption profiles of the two DPP-F-PhCN films. In particular, the additional sharp EQE response at 635 nm coincides with the absorption maximum of the o-DPP-F-PhCN film (λmax = 638 nm). Interestingly, the EQE and absorption profiles of o-DPP-F-PhCN are similar to those of p-DPP-PhCN, not those of o-DPP-PhCN. Among the thiophene analogues of DPP-PhCNs, p-DPP-PhCN exhibited the highest degree of molecular aggregation, whereas the introduction of a furan moiety altered the aggregation behavior of the molecules and the ortho-substitution resulted in greater molecular aggregation and a red-shift of the absorption maximum, leading to the additional EQE response at long wavelengths.
The slightly higher PCE of p-DPP-F-PhCN originated from its higher open-circuit voltage (VOC) of 0.83 V compared with that of o-DPP-F-PhCN (VOC = 0.54 V). This result is inconsistent with the general understanding that the VOC values of the devices generally depend on the energy difference between the HOMO level of the donor and the LUMO level of the acceptor.19 For a given HOMO level of the donor, o-DPP-F-PhCN, which has a higher LUMO level than p-DPP-F-PhCN, is expected to result in a device with a higher VOC; however, the VOC of the o-DPP-F-PhCN-based device (VOC = 0.54 V) was lower than expected. This result is attributable to the strong aggregation of o-DPP-F-PhCN, as confirmed by its absorption spectrum (Figure 2) and high DHm, where the enhanced orbital interactions could destabilize/stabilize the HOMO/LUMO levels of the aggregates.12 Further improvements of photovoltaic properties could be achieved by optimizing device fabrication conditions and introducing a low bandgap polymer donor or a third component for ternary cells.)

The p- and o-DPP-F-PhCN were synthesized for use as NFAs in PSCs. The optical and electrochemical properties of the small molecules varied according to both the substituent position and the furan effect. Among the DPP-F-PhCNs and DPP-PhCNs, the highest-lying HOMO and LUMO levels were observed in o-DPP-F-PhCN because of both the furan introduction and the ortho-substitution. The relatively red-shifted and enhanced λmax in the UV–vis absorption spectra and greater enthalpy change of o-DPP-F-PhCN relative to that of p-DPP-F-PhCN indicated stronger molecular aggregation behavior of o-DPP-F-PhCN, leading to the observed EQE response at long wavelengths. Such strong aggregation of o-DPP-F-PhCN resulted in a relatively low VOC value in the device despite its highest-lying LUMO level, which can be explained by the enhanced orbital interactions and thus stabilized LUMO level of o-DPP-F-PhCN.