We present the dispersion properties of alkylated zinc-phthalocyanine (R-ZnPc) for single-walled carbon nanotubes (SWCNTs), which finds useful for the β-phase formation of a polyvinylidene fluoride (PVDF) matrix. The R-ZnPc was prepared by direct tetramerization of alkylated phthalonitrile with zinc salts. Due to the presence of long peripheral alkyl-substituents, the prepared R-ZnPc exhibited controllable solubility in selected solvents. Taking advantage of the hydrophobic interactions of alkyl chains and flat structural features of Pc macrocycles, molecular wrapping of R-ZnPc around the SWCNTs was intended to produce noncovalent supramolecular complexes. The prepared Pc-CNT complexes were analyzed by various characterization methods, including UV-Vis, FTIR, Raman, TGA, SEM, and XPS measurements. Furthermore, the Pc-CNT/PVDF composite films were prepared using the Pc-CNT complex as effective nanofillers for the PVDF matrix. The dielectric constants of the Pc-CNT/PVDF composite films were significantly increased as a consequence of the promoted b-phase formation in the PVDF matrix, as evidenced by FTIR and XRD measurements. Current results suggested that the R-ZnPc functionalized SWCNTs have affected the crystalline structure of the PVDF matrix, which can be a useful tool for producing nano-fillers for hybrid polymer composites.

Noncovalent functionalization of single-walled carbon nanotube (SWCNT) using alkylated zinc-phthalocyanine (R-ZnPc) is presented, which finds useful for the  β-phase formation of a polyvinylidene fluoride (PVDF). Current result suggests that the presence of R-ZnPc functionalized SWCNT has significantly affected the crystalline structure of the PVDF matrix. 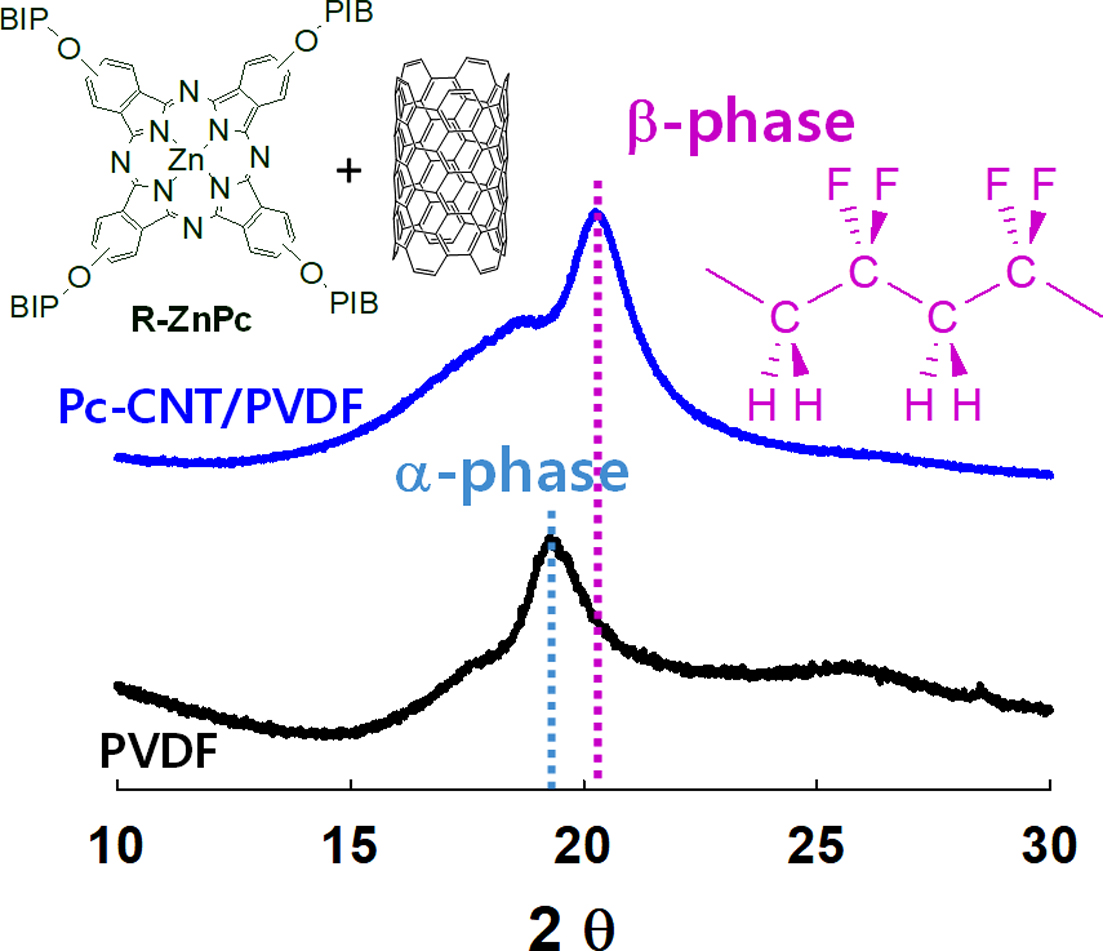 This work was supported by the Technology Innovation Program (10047756 and 10052838) funded by the Ministry of Trade, Industry, and Energy (MOTIE, Korea).

Polyvinylidene fluoride (PVDF) and its copolymers have been widely used in many application fields because of their superior piezoelectric, ferroelectric properties and dielectric constants.1-4 The electrical properties were closely related to various semi-crystalline polymorphs of PVDF.5,6 Among semi-crystalline phases, β-phase showed outstanding electrical properties owing to its all-trans (TTT) configuration.7,8 The experimental techniques and strategies to induce the β-phase structure have been investigated in particular conditions, such as drawing films, applying an extremely high electric field, and crystallization from a solution or melt.9,10
As a measure to enhance the electrical properties of PVDF and facilitate the β-phase formation, the polymer nanocomposites combined with inorganic nano-fillers have been widely investigated.11-13 Inorganic fillers, such as BaTiO3, Ti4O12, and Pb(Zr,Ti)O3, have been combined with PVDF, which effectively enhanced the physical, mechanical and electrical properties.14-17 However, these nanocomposites with inorganic fillers created processing problems because these fillers made PVDF significantly dense and brittle. Meanwhile, organic fillers are useful in maintaining the flexibility of PVDF nanocomposites. Notably, carbon nanotubes (CNTs) have been extensively investigated because of their electrical properties, low mass density, and large aspect ratio, which effectively enhanced the electrical, ferroelectric, and piezoelectric properties of the PVDF composites.18-22 However, since CNTs are tightly entangled with each other by secure van der Waals forces, appropriate surface treatment and pre-milling procedures needed to be applied to distribute CNTs uniformly inside the PVDF matrix.
In order to disperse CNT bundles effectively inside the polymer matrix, numerous surface modification methods have been employed. Covalent functionalization of CNTs with a polymer matrix was tried, and, in this case, the polymer covering on the CNT surface provided adhesion and dispersion to the polymer matrix so that the prepared polymer composites had enhanced electrical and mechanical performances.23-25 However, the covalent approach mostly disrupted the well-ordered π-conjugated system and deteriorated the electrical and mechanical properties of the CNTs. To overcome the destruction of the structural nature, the non-covalent approach, which is weak and long-range interactions, can be used to maintain the inherent properties of CNTs. Among various methods, we have been especially intrigued by noncovalent functionalization with metallophthalocyanines (MPcs).26 Due to excellent chemical, thermal, and light stability, the polymer composites including MPc have provided high electrical conductivity and superior mechanical and chemical stability, along with superb electrochemical activities.27-29
Meanwhile, several polymers have been employed as matrix materials for preparing polymer-based nanocomposites.30-33 PVDF and its copolymers have exhibited relatively high dielectric permittivity and breakdown strength, compared to other commodity polymers. However, despite many approaches, the dielectric constant values are still low, and thus the practical applications for energy storage capacitors are quite limited.
In this article we present the preparation and applications of alkylated zinc-phthalocyanine (R-ZnPc) for noncovalent functionalization of single-walled carbon nanotubes (SWCNTs), which we then use as a nanofiller for PVDF composites. Peripherally substituted ZnPcs are suitable for SWCNT modification due to hydrophobic interactions of alkyl chains and flat molecular structure of the Pc macrocycles. Furthermore, alkyl chains at peripheral sites of ZnPc allowed the molecular wrapping of Pcs around the SWCNTs. Thus, we expected that a large amount of ZnPcs would firmly adhere to the CNTs surface and that the enhanced compatibility would increase the dispersing nature of the SWCNTs inside the PVDF polymer matrix. Furthermore, Pc-functionalized SWCNTs affected the crystalline structure of the PVDF, inducing more β-phase during nucleation inside the matrix. The prepared ZnPc and Pc-CNT complex was fully examined using various characterization methods. The effect of the Pc-CNT filler on the β-phase formation of the polymer matrix was examined, and the resulting dielectric properties of ZnPc-CNT/PVDF composite film were presented.

Chemicals. Lithium metal, zinc(II) acetate, 1-hexanol, 1,8-diazabicyclo[5.4.0]undec-7-ene, polyvinylidene fluoride (PVDF), tetrahydrofuran (THF), dichloromethane (DCM), and N,N-dimethylacetamide (DMAc) were purchased from Sigma-Aldrich. 4-Nitrophthalonitrile was purchased from TCI, and vinyl terminated polyisobutylene (HRPB1000) was provided by Daelim Corporation (Korea). All reagents were used without further purification. SWCNTs (>90 wt%, diameter 1.1 nm, length 1-3 µm) were purchased from US Research Nanomaterials.
Synthetic Procedures. Synthesis of Alkylated Phthalo-nitrile: PIB1000-alcohol was synthesized by following the previous literature procedure.34 A mixture of 4-nitrophthalonitrile (1.63 g, 8.89 mmol), PIB1000-alcohol (3.0 g, 2.96 mmol), and Cs2CO3 (4.81 g, 14.81 mmol) was dissolved in 30 mL of THF and refluxed in the inert gas for 12 h. The residue was cooled to room temperature, and the THF was evaporated under reduced pressure. The crude products was extracted with hexane, and washed with a 90% ethanol-water mixture three times, then dried over MgSO4. Hexane was removed under reduced pressure using a rotary evaporator to afford alkylated phthalonitrile as a viscous oil (2.89 g, 85.3% yield). 1H NMR (500 MHz, CDCl3) δ 7.69 (d, J=8.5 Hz, 1H), 7.24 (d, J=2.0 Hz, 1H), 7.16 (dd, J=8.5, 2.10 Hz, 1H), 3.85 (dd, J=8.5, 5.5 Hz, 1H), 3.74–3.71 (m, 1H), 1.61–0.85 (multiple peaks). MALDI-Mass (C79H148N2O) 1131.18 m/z.
Synthesis of Alkylated Zinc-phthalocyanine (R-ZnPc): Alkylated phthalonitrile (1 g, 0.877 mmol) and ZnCl2 (44 mg, 0.323 mmol) were added to the pressure tube, and the reaction mixture was heated to 160 oC for 4 h. After cooled down to 25 oC. The alkylated zinc-phthalocyanine was extracted with hexane and washed with acetonitrile and a 90% ethanol-water mixture three times. After being dried over MgSO4, then filtered, hexane was removed under reduced pressure. The alkylated zinc-phthalocyanine was isolated by column chromatography using silica gel and (DCM/hexane 4:6) as the eluent, and the product was a greenish viscous oil. 1H NMR (500 MHz, CDCl3) δ 9.05 (s, 3H), 8.54 (d, J=58.7 Hz, 4H), 7.62 (s, 5H), 4.39–4.22 (m, 8H), 2.50–0.70 (multiple peaks). MALDI-mass (C316H584N8O4Zn) 4620 m/z.
Preparation of the Pc-CNT Complex: 1 mg SWCNT was sonicated in 10 mL CHCl3 for 30 min at 0 oC in a sonication bath (PowerSonic410, Hwashin, Korea). A solution of R-ZnPc 2 mg in 1 mL of CHCl3 was added dropwise to the above SWCNT solution, and the mixed solution additionally was sonicated for 1 h. The resulting ZnPc/SWCNT complex was isolated with a PTFE membrane filter (pore size 200 nm). The residue was washed successively with CHCl3 to remove excess ZnPc and proceed until the filtrate was colorless. The complex was collected and dried in a vacuum oven for 24 h.
Preparation of the Pc-CNT/PVDF Composite: 1 g of PVDF in 5 mL of DMAc was stirred at 50 oC until a homogeneous solution was obtained. Meanwhile, the Pc-CNT dispersion in 1 mL DMAc was prepared by sonication of the solution for 30 min at 0 oC in a sonication bath (PowerSonic410, Hwashin, Korea). Then, the PVDF solution and Pc-CNT dispersion were mixed in the desired quantity to make a suspension by sonication for 30 min. The suspensions were coated on a glass plate by the doctor blade method, and the film thickness was controlled to 0.5 mm and dried in a vacuum oven at 80 oC.
Property Characterization: 1H NMR measurements were performed on an Inova Tech at 500 MHz using CDCl3 as a solvent. The UV-Vis absorption and photoluminescence spectra were measured by using Shimadzu UV-1800 spectrophotometer and Perkin-Elmer LS-45 spectrofluorometer, respectively. MALDI-TOF mass spectrometry, X-ray photoelectron spectroscopy, and FTIR analysis were measured at the Korea Basic Science Institute. Thermogravimetric analysis (TGA, STA6000, Perkin-Elmer) was performed in nitrogen at a heating rate of 10 oC/min. Field emission scanning electron microscopy (FE-SEM) was performed on a SUPRA25 (Carl Zeiss AG, Germany). Raman spectra were measured using a NRS-5100 with an excitation laser of 532 nm. X-ray diffraction (XRD) analysis was analyzed using Xpert 3. The dielectric constant and dielectric loss values obtained on a HP 4194A impedance analyzer at room temperature in the frequency range of 60 Hz to 10 MHz.

The alkylated phthalonitrile, an intermediate, was synthesized by refluxing the hydroxy-terminated polyisobutylene with 4-nitrophthalonitrile in the presence of Cs2CO3. The cyclotetramerization of alkylated phthalonitrile with zinc(II) chloride produced alkylated zinc phthalocyanine (R-ZnPc). (Scheme 1). The structure of R-ZnPc product was successfully identified by MALDI-Mass spectroscopy.
Generally, in UV-Vis spectra, Pc compounds have two absorption characteristics, one in the UV region (B- or Soret band) and the other in the visible region (Q-band).35 As shown in Figure 1, R-ZnPc exhibited a sharp Q-band at 683 nm. R-ZnPc became highly soluble in THF and chloroform, but only a small amount was soluble in nonpolar solvents like hexane.

We have synthesized alkylated zinc-phthalocyanine (R-ZnPc) by direct tetramerization of alkylated phthalonitrile with zinc salt. Taking advantage of preferential interactions of Pc macrocycles with single-walled carbon nanotube (SWCNT), we have produced supramolecular complexes from the molecular wrapping of R-ZnPc around SWCNTs. The prepared Pc-CNT complexes were analyzed by various characterization techniques, including UV-Vis, FTIR, Raman, TGA, SEM, and XPS measurements. Besides, the Pc-CNT/PVDF composite films were prepared, and their dielectric properties were examined. The dielectric constants were observed to be significantly increased, which was due to the promoted β-phase formation in the PVDF matrix, as evidenced by FTIR and XRD measurements.