The selective utilization of dissociated products of carbonic acid to induce either pH control or adsorption of heavy metal ions on the surface of an adsorbent could be generally achieved by the gas-phased mixture of CO2 and H2O (CHM). Given that the reduction of chromium (Cr(VI)) has occupied a growing niche within industrial sectors, we present a set of computation data to observe standard energies and the adsorption behavior via CHM under the aqueous solution. Herein, activated carbon fibers (ACF) were adapted as a skeleton absorbent. With a cross-validation on physicochemical characteristics, thus-produced sample (CACF) revealed a decrement in the specific surface by 9.58%, but also experienced an increment of 33.40% in surface functional moieties compared to ACF. In terms of adsorption capacity, CACF showed 6.36% more Cr(VI) adsorption capacity than ACF with 200 mg of initial adsorbent amount at 323 K. Based on our calculations, the Langmuir isotherm was favored by all samples. Adsorption behavior was found to be spontaneous and feasible in nature over certain temperature. Lastly, thermodynamic parameters successfully underpinned that the physio-sorption was found to be dominant compared to the chemisorption,

A mixture of CO2 and H2O through gas-phase significantly increased the surface functional moieties as shown in the figure. Herein, as-synthesized sample revealed minimum decrement in the Brunauer-Emmett-Teller surface area, but increment in acidity. 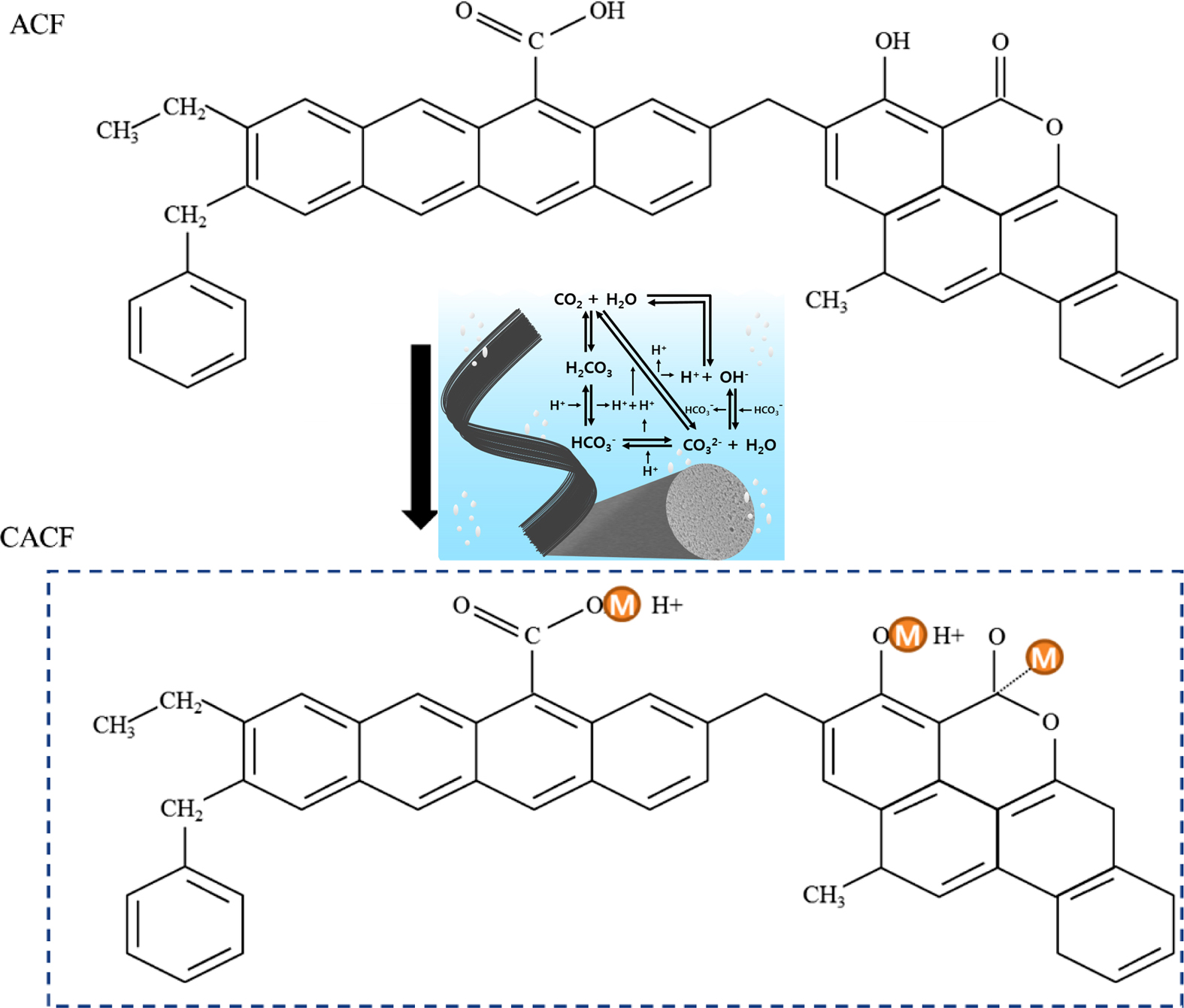 This research acknowledges the sabbatical support given by Anyang University.

Heavy metal contamination of surface water bodies and ground water has become a serious environmental concern worldwide. At low-level exposure, the presence of heavy metal contaminants in water could result in undesirable consequences. In particular, hexavalent form of chromium (Cr(VI)) and its known compounds are considered to be carcinogenic, mutagenic, and genotoxic on the prevailing flora and fauna of the aquatic environment.1 Cr(VI) is also defined as one of the hazardous pollutants by the US Environmental Protection Agency in 2004.2 Therefore, adequate treatment of aqueous Cr(VI) prior to discharge is urgent for the reduction of secondary contamination. Technical approaches on the Cr(VI) treatment have so far been mostly focused on the adsorption using low cost of adsorbents such as activated carbon fibers (ACF). However, major drawbacks of raw carbonaceous adsorbents including low adsorption capacity and large access time limit their practical applications. Thus, surface modification is essentially required after the activation process to introduce an ion-exchangeable environment as a supporter.
A widely accepted idea is that an acidic treatment on the carbonaceous surface using strong acids is efficient for the feasible environment of heavy metal removal. Whilst most of the work in this area made the use of strong acid, we previously suggested a green candidate using an air bubble mixture of CO2 and H2O (CHM) onto a carbonaceous skeleton.3 The notion that carbonic acid has often considered as a weak acid arising out of (i) the non-negligible account of undissociated carbon dioxide and (ii) short lifetime in aqueous environment was held for a long time.4 Therefore, the use of carbonic acid and its dissociated products as a chemical feedstock for surface modification and ion-interactions was not highly encouraged with its low acidity (pKa; 6.4).5 Notwithstanding this, recent studies have updated that carbonic acid may have comparable acidity to formic acid with its pKa in a range of 3.4~3.8.6,7 With this content, one may assume the possibility of using dissociated carbonic acid upon interaction with other ions.
Within the scope of this study, we further tracked the adsorption behavior of Cr(VI) under computed standard energies. For a better understanding, we also supported physiochemical properties and adsorption kinetics of ACF before and after loaded with dissociated products of carbonic acid. Based on the concept of capturing hazardous materials via hazardous materials, we believe that an environmental-friendly and economic surface modification technique compared to other strong acids by solely using the major culprit of global warming could pave a new way to the relevant academia.

All chemicals were of analytical grade and used without any further purification. Preparation of samples was followed by our early procedure. In brief, CACF was prepared at a pressure of 10 bar with 373 K of CHM for 1 h through the gas-phase (0.2 mL min-1) via a compact size of batch with 160 mm in diameter and 400 mm in height. This procedure is to introduce surface functional moieties from the dissociated products of carbonic acid (Figure 1). Fixed temperature of 373 K was introduced to prevent any hot water layer around the surface of fibers.8 Cr(VI) ion standard solution was diluted by 10 ppm of distilled water. Each sample in a range of 100~200 mg (±1 mg) was doped into Cr(VI) containing solution after the temperature was adjusted from 303 to 323 K. Surface characteristics were determined by using ASAP 2460 (Micromeritics). The pretreatment was performed for 12 h through the heat degradation at 573 K while maintaining a vaccum state of 1.33×10-3 Pa. The specific surface area for the prepared ACF was measured by using the BET equation. The correlation between the surface area (As) and monolayer (Vm) is shown in the following eq. (1):

where, Na is Avogadro number and s is the area covered by one nitrogen molecule. The generally accepted s value is 0.162 nm2. After the BET equation for the determination of the total specific surface area, the t-Plot equation was used to calculate the micropore and external specific surface area as shown in the following eq. (2):

t, n, nm refer to the average thickness, total adsorption amount, and monolayer adsorption amount, respectively. s is the atom size of nitrogen at 298 K. The chemical properties were analyzed using an element analyzer with a thermal conductivity detector (EA 1008, FISONS). The Boehm titration was performed to determine the sum of acidity after a CHM treatment (G20, Mettler Toledo).9 Inductively coupled plasma optical emission spectroscopy (ICP-OES) was adopted to analyze the adsorption characteristics of Cr(VI) (Optima 5300DV, PerkinElmer). The adsorption efficiency was calculated by the following eq. (3)-(4):

Physiochemical Properties of Samples. Observed physiochemical characteristics of samples are listed in Table 1. CACF experienced inevitable decreases of 9.58% and 11.64%, respectively, in SBET and Sm as compared to ACF, indicating the increase of surface functional moieties which may block the access of N2 molecules onto the fiber surface. With accordance, CACF showed higher H- and O-contents than ACF by an increase of H- and O-containing surface functional moieties.10 Throughout the physiochemical properties, it was concluded that dissociated products of carbonic acid were successfully loaded on the surface of CACF.
Adsorption Characteristics. Adsorption plots of Cr(VI) onto samples as a function of time by initial adsorbent amount and the temperature are depicted in Figure 2. The direct proportional relationship between initial adsorbent amount and the adsorption capacity could be attributed to an increased surface area which allows more binding sites for Cr(VI) ions.11 Herein, 200 mg of CACF was sufficient to ensure 93.24% Cr(VI) adsorption capacity at room temperature. With an increase in the temperature from 303 to 323 K, the maximum adsorption capacity at the equilibrium state increased from 70.10% to 83.03% and from 70.44% to 84.21% in 100 mg of ACF and CACF, respectively. This indicates that the rate of intra-particle diffusion of Cr(VI) ions into pores of the adsorbent is more feasible as the temperature rises.12 In all circumstances, CACF recorded the highest increment, or “plateau” value at 180 min and the status was secured upon the equilibrium state at 240 min. Especially, more rooms for CHM benefited the overall adsorption efficiency as can be seen in Figure 2(a). Herein, CACF with improved surface functional moieties offers strong electrostatic attraction between negatively charged Cr oxy-anions and protonated sorbent, thus leads to a favorable ion-exchangeable environment. The pH of the aqueous solution could change the heavy metal ions into various forms to facilitate adsorption. In case of Cr(VI), HCrO4−, Cr2O72−, Cr4O132−, and Cr3O102− are reported to be present as dominant species in the pH range between 2 and 6.13 Given that the low pH leads to an increase in Cr(VI) removal, it could be concluded that the adsorption capacity of Cr(VI) could be benefited by the increased acidity from the dissociated products of carbonic acid.
Adsorption Kinetics and Thermodynamics. Kinetic parameters were calculated using the Langmuir isotherm and listed in Table 2. The former was calculated using the following eq. (5):

where, Ce (mmol L-1) is the equilibrium concentration, Qe (mmol g-1) is the equilibrium constant, Xm (mmol g-1) is the maximum adsorbed amount of heavy metal, and Ke (L mmol-1) is the adsorption strength onto the adsorption sites. Major parameters revealed that the Langmuir isotherm was favored with a high regression coefficient for both ACF and CACF. The Langmuir monolayer adsorption capacity (qmax) was found to be increased by the surface modification, and the obtained qmax values are in accordance with the above adsorption characteristics. In case of the Freundlich isotherm, it was found to be unfavorable compared to the Langmuir isotherm (R2 < 0.9900). Thermodynamic parameters of standard enthalpy (ΔHo), standard entropy (ΔSo) and standard Gibbs free energy (ΔGo) were calculated for further computations. The change in ΔHo and ΔSo was calculated using the following eq. (6):

where, KL is the equilibrium constant, R is the universal gas constant (8.314 J mol-1 K) and T represents the temperature in Kelvin. Thereafter, ΔGo could be obtained by the following eq. (7):

The dependence of In KL on 1/T for the Cr(VI) adsorption varying initial adsorbent amounts and temperatures are plotted in Figure 3 and computed thermodynamic parameters are listed in Table 3. Values of ΔHo recorded the lowest at 200 mg of initial adsorbent amount in both ACF and CACF. Low values of ΔHo shows that Cr(VI) ions and surface functional moieties are having weak interactions. In other words, the physio-sorption becomes more favorable than the chemisorption with more initial adsorbent amounts. The change of ΔGo for physio-sorption generally occurs in a range of -20~0 kJ mol-1 and chemisorption is between -80 ~ -400 kJ mol-1.14 Values of ΔGo from the samples were in a range of -0.01 ~ -10.78 kJ mol-1, thus the process was feasible and spontaneous. This implies that a more advanced technique is required to develop evenly dispersed surface functional moieties, which may cover the majority area of the surface. Decreased values of ΔGo with the temperature rise suggest that the adsorption is more preferable at high temperatures. Herein, CACF was more favorable for Cr(VI) adsorption than ACF in all circumstances. Lastly, positive values of ΔSo confirm the increased randomness at the solid-solution interface and the occurrence of ion-replacement reactions during Cr(VI) adsorption. 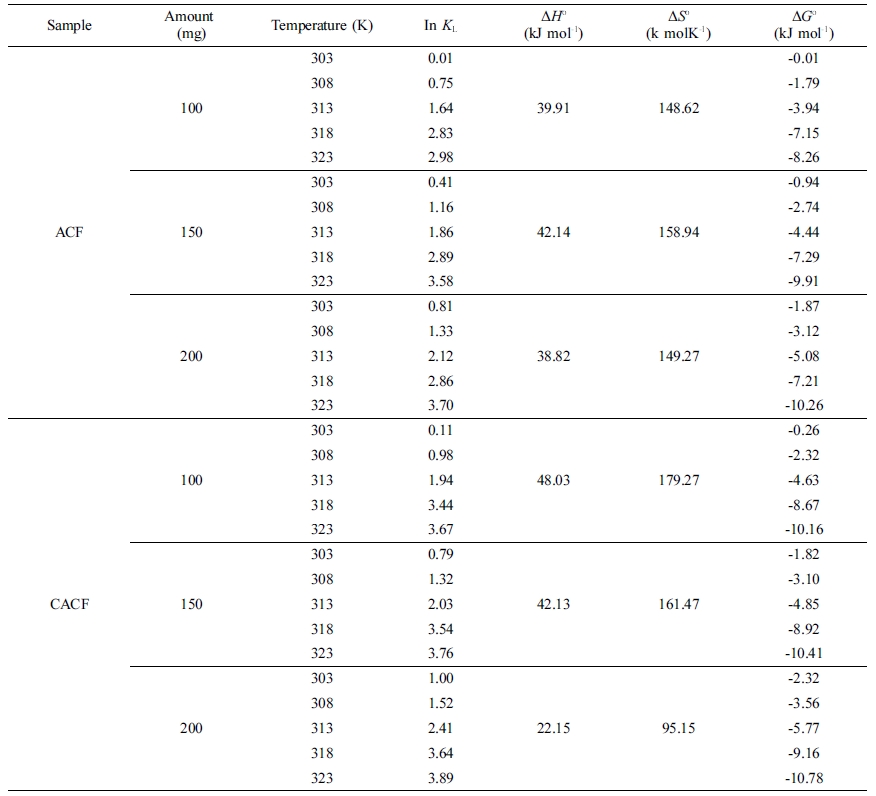 Standard energy computations point out that physiochemical approaches hold the promise of allowing significant contributions to understand the adsorption behavior of Cr(VI) onto ACF and CACF which could be summarized as follows;
(1) Physiochemical analyses observed that a green modification onto ACF leads to a decrement in the specific surface area by 9.58%, but also increases 33.40% of surface functional moieties.
(2) CACF revealed the maximum Cr(VI) adsorption capacity of 6.36% more than ACF with 200 mg of initial adsorbent amount at 323 K.
(3) The Langmuir isotherm was fitted with all samples. Observed natures of the adsorption behavior of Cr(VI) onto ACF and CACF were found to be spontaneous and feasible over certain temperature. Herein, the physio-sorption was more favorable than the chemisorption.
We also noted that there are discovered technical limitations of unevenly dispersed surface functional moieties, or more opportunities which could pave a way for widespread applications with the aid of further developments. In conclusion, Cr(VI) onto carbonaceous surface has a possibility to be effectively managed by controlling the balance of physiochemical environment via green aid.