Series of waterborne polyurethanes (WPUs) containing poly(tetra methylene glycol) (PTMG), 4,4-dicyclohexylmethane diisocyanate (HMDI), 2,2-dimethylolpropionic acid (DMPA), 2,2,4-trimethyl-1,3-pentanediol (TMPD), isosorbide (ISO) and ethylenediamine (EDA) were synthesized. The effects of ISO on the structure and properties of WPUs were studied by gel permeation chromatography (GPC), Fourier-transform infrared spectroscopy (FTIR), differential scanning calorimetry (DSC), dynamic mechanical analyzer (DMTA), X-ray diffraction (XRD), thermogravimetry (TG), mechanical test, chemical resistance and hardness test. The deconvolution analysis of FTIR of WPUs revealed that the hydrogen bond interaction in the WPUs increased with the increase of ISO content. Furthermore, the degree of microphase separation was increased with the increase of hydrogen bond interaction, which was confirmed by DSC, XRD and DMTA test. The results demonstrated that the addition of ISO can increase the hydrogen bond interaction between the hard and hard segments in WPUs, which improved the mechanical properties of the WPU films. The highest tensile strength was obtained of 59.67 MPa when the content of isosorbide was 10.35 wt%. Moreover, the ISO was helpful to improve the chemical resistance and hardness of the coatings by the comprehensive performance analysis. Keywords: isosorbide, micro-phase separation, waterborne polyurethane, mechanical properties.

Isosorbide (ISO) is a green, nontoxicity and renewable biomaterial which has been widely used in synthesis of polyesters, polyethers, polyamides and polycarbonates. Isosorbide can offer high rigidity and improve thermal stability to the synthesized ISO-based polymers.1-3 Recently, biomass-based polyurethanes from ISO have attracted increasing attention because ISO possesses two hydroxyl groups which makes it very suitable for polyurethane synthesis as chain extender.4-6 With the addition of ISO, the glass transition temperature of hard segments of synthesized ISO-based polyurethanes was significant increased which has been confirmed by Marín et al. and Calvo-Correas et al..7,8 Moreover, the ISO can also increase the tensile strength of ISO-based polyurethanes.9 The changes in the properties of polyurethanes are associated to the effects of ISO on the morphology. Javni et al. found that the hard domain size and the mean separation distance of thermoplastic polyurethanes were decreased with the increasing of ISO content. 10 Research results from Oprea et al.4 and Blache et al.5 revealed that ISO decreased the phase separation of polyurethane. Due to the growing consciousness on environmental concerns regarding hazardous air pollutants, waterborne polyurethanes (WPUs) have attracted increasing attention.11,12 However, compared to solvent polyurethane, a number of flaws like the poor mechanical properties, inferior thermal properties and solvent resistance limited the usage of WPUs especially for coatings.13-15 Due to the rigid V-shaped bicyclic structure of ISO, the incorporation of ISO into the WPUs backbone could improve its mechanical properties and solvent resistance. Hence, a few works on ISO-based WPUs have been investigated.16-18 Xia et al.16 prepared a series of soybean oil- ISO-based WPUs by varying ISO content. When the ISO amount was increased from 0 to 20 wt%, the Young’s modulus and the ultimate tensile strength of soybean oil-ISO-based WPUs were increased from 2.3 to 63 MPa and 0.7 to 8.2 MPa, respectively. Li et al.17 found that the high ISO content was in favor of good acetone resistance and moderate impact resistance of WPU coatings which applied on aluminum panels. Some ISO-based WPUs with three chain extenders (EDA, ADH and water) have been prepared but these WPUs were still not available for coatings.18
To our best knowledge, ISO-based WPUs with high strength, hardness, solvent resistance and excellent adhesion for coatings are not mentioned in previous literatures. Furthermore, the effects of ISO on the hydrogen bond interactions and microphase separation of ISO-based WPUs are not investigated clearly. In this work, the effects of ISO content on the properties of ISO-based WPUs were investigated. Serious of WPUs with different ratio of ISO and 2,2,4-trimethyl-1,3-pentanediol (TMPD) were synthesised. The hydrogen bond interactions were studied by Fourier-transform infrared spectroscopy (FTIR). The microphase separation of ISO-based WPUs was investigated by DSC, XRD and DMA tests. The ISO-based WPUs with good mechanical properties, thermal stability, hardness, chemical resistance and adhesion are much suitable for the usage of coatings.

aterials. Poly(tetra methylene glycol) (PTMG1000, PTMG2000, Industrial grade) was purchased from Mitsubishi in Japan; 4,4-dicyclohexylmethane diisocyanate (HMDI, Industrial grade) was purchased from Degussa AG; 2,2- dimethylolpropionic acid (DMPA, Industrial grade) was obtained from Perstop; Isosorbide (ISO, analytical purity), 2,2,4-trimethyl-1,3-pentanediol (TMPD, analytical purity), triethylamine (TEA, analytical purity) were supplied by Sa en Chemical Technology Co., Ltd.. Shanghai in China. Ethylenediamine (EDA, analytical purity) was obtained from Tai cang Shanghai Test Reagent Co., Ltd.. Acetone (AC, analytical purity) was supplied by Shanghai Shen Bo Chemical Co., Ltd.; stannous octoate (T9, analytical purity) and dibutyltin dilaurate (T12, analytical purity) was supplied by Beijing Chemical Factory.
Synthesis of Waterborne Polyurethane Dispersions. The mass ratios of the reagents of WPU are listed in Table 1. The synthetic route of WPU is shown in Scheme 1. First, PTMG1000, PTMG2000, ISO and TMPD which dried in a vacuum at about 100 ℃ for 1 h and poured into a 250 mL four-necked flask equipped with a reflux condenser, a thermometer and a mechanical stirrer. Then the HMDI was added into the mixture. The mixture was reacted at 90±2 ℃ under the protection of N2. After reacting about 2.5 h, the DMPA dissolved in AC was added into the flask and reacted at 80±2 ℃ for 1 h. Subsequently, the T9 and T12 were added into the flask and reacted at 70±2 ℃ until the content of –NCO reached the theoretical value. The acetone was slowly added to adjust the viscosity of the prepolymer. Then, the TEA used as a neutralizing agent and the distilled water were added into the flask and stirred with the rate of 1300 r/min for 2 min. Afterwards, the EDA was added into the mixture when the temperature was maintained at about 40 ℃. Finally, the WPU dispersion was obtained after the acetone was removed under vacuum.
Preparation of WPU Films. The emulsion was poured into a Teflon plate and dried naturally for 3 days. After a large amount of water was volatilized, meanwhile, the surface of the film was dried basically, and then the film was taken out and placed in a vacuum oven. The film was dried at 50 ℃ under vacuum until its mass no longer changed for further testing.
Characterizations. The Particle Size and Distributions: The average particle size and distributions of WPU emulsion were tested in Malvern ZetaSizer Nano-ZS90 (Malvern, UK) at 25 ℃, and the emulsion concentration was diluted to 3‰ by deionized water. The laser scattering angle is set at 90°.

Scheme 1. Synthetic route of WPU.
Gel Permeation Chromatography (GPC): The numberaverage molecular weights of WPU were determined by GPC (Hewlett-Packard 1100) with polystyrene as the calibration standard. The solvent was THF, the flow rate of mobile phase was 1.00 mL·min-1, the temperature was 25 ℃, injection volume was 20.00 μL, sample content was 0.3%.
Fourier Transform Infrared Spectroscopy (FTIR): The ATR-IR spectra of WPU films were recorded on Nexus-870 Infrared spectrometer (ATR) (Nicolet, USA) with the wavenumber range of 600-4000 cm-1, a resolution of 2 cm-1, and a scan number of 32.
Differential Scanning Calorimetry (DSC): WPU films were thermally analyzed by differential scanning calorimetry (DSC, TA Instruments, USA) under a nitrogen atmosphere, and the sample mass was 7 to 10 mg. The samples were heated to 200 ℃ for 3 min to eliminate thermal history with the heating rate of 20 ℃/min, then cooled to -80 ℃/min to keep 5 min with the rate of 20 ℃/min. Finally, the samples were heated to 200 ℃ with the heating rate of 20 ℃/min. The result was recorded from the cooling scan to the second heating scan.
Dynamic Mechanical Thermal Analysis (DMTA): The viscoelastic properties of WPU films were measured by dynamic mechanical thermal analyzer (DMTA, TA Instruments, and USA). The thickness of the films was controlled below 0.5 mm, the dimension of the sample was 25 mm× 4 mm, and the test temperature was -80~200 ℃ with a heating rate of 5 ℃/min, the frequency was 1 Hz.
X-ray Diffraction (XRD): The crystallinity of WPU films was characterized using a Japanese XD-3 X-ray diffractometer. The dimension of the sample was 1 cm×1 cm×0.4 cm. The scanning rate of 5 (°)/min, a sampling width of 0.02o, and an angle scanning range of 5° to 80°.
Mechanical Properties: Tensile properties were measured on XLW-500 intelligent electronic tensile testing machine (Shenzhen San si Materials Testing Co., Ltd.).The dimension of WPU film was 25 cm×4 cm, the tensile rate of 200 mm/ min, the test temperature was room temperature, and each sample test three times to take the average.
Thermal Gravimetric Analysis (TG): The thermal degradation and structure of WPU films were studied in Pyris-1 thermogravimetric analyzer (netzsch, Germany) under nitrogen atmosphere. The temperature range was from room temperature to 600 ℃, the heating rate was 20 ℃/min, and the sample quality was 7~10 mg.
The Contact Angle: The contact angle of WPU films were measured by contact angle measuring instrument (DSA10- MK2, KRUSS, Germany). The test temperature was 25 ℃. Each film was tested at three different points and averaged.
The Chemical Resistance: The test results of the chemical resistance were expressed in liquid absorption. The dimension of WPU films was 4 cm×4 cm, the sample initial mass was m0, and the samples were soaked in water, acetone, ethanol (99.5%) and DMF (N,N-dimethylformamide) for 24 h, then take out and dry the surface, the sample mass was m1. WPU films in the liquid absorption rate according to the following formul: 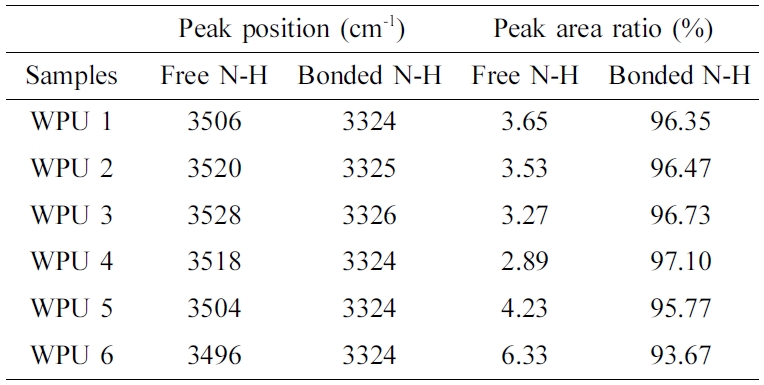 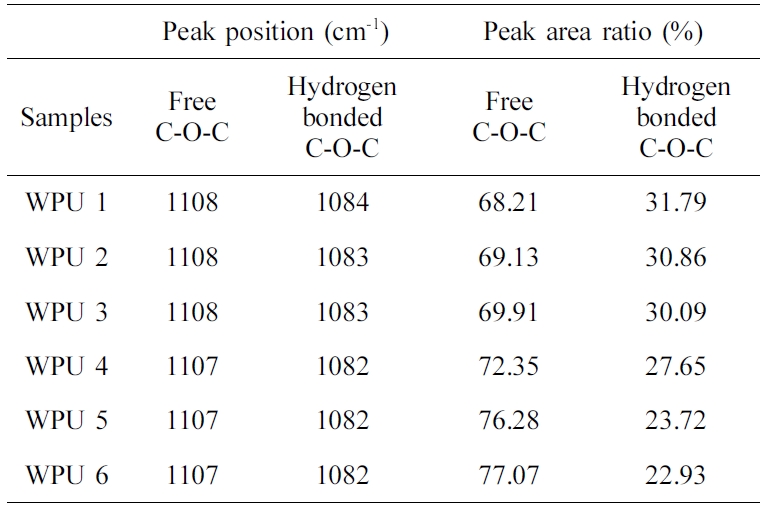